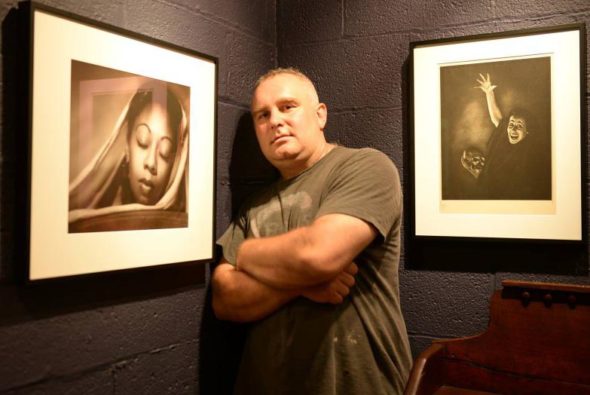 Yellow Springs community member William “Skip” Brown was shot and killed along with his friend Sherri Mendenhall on Sunday at their apartments on East Enon Road. Brown is shown in the gallery he created that features the photographs of his great-grandfather, Axel Bahnsen. (Photo from bahnsengallery.com)

A beloved villager is lost

Skip Brown was a larger-than-life kind of guy. He had a big voice and a big laugh and even the horn on his pickup truck was louder than most. Bryan Cady, who got to know Skip in the past few years, remembers walking down Livermore Street and hearing a big, blaring horn.

When he turned around, there was Skip behind the wheel of his truck, just grinning at him.

“He was so full of life,” Cady said this week.

This week family and friends shared stories and impressions of Skip, who with Sherri Mendenhall was shot and killed on Sunday at their adjoining apartments on East Enon Road. The man they knew and loved was gregarious, kind, generous to a fault, passionate about his enthusiasms, generally happy and a lover of cats.

And he loved people too, according to Christian Clothier, who became close to Skip in recent years due to a shared love of photography.

“He had a knack for talking to people,” Clothier said, having witnessed over and over that Skip made friends wherever he went. And he didn’t just shoot the breeze with people, Clothier said, but instead picked up on something important to each person, referring back to it in later conversations.

But life didn’t go easy on Skip, and several referred to his having had a hard time growing up. His parents split up when he was a toddler, and Skip and his brother were raised by their father, Larry, initially in Yellow Springs. Eric Clark first knew Skip when he was a toddler who lived next door to his best friend, then when Skip was a preteen he was one of the kids who delivered papers for Clark’s newspaper distribution business, and also hung out at his house.

Skip was always busy, brimming with plans and ideas, according to Clark, both as a teenager and an adult.

“That busyness as a young teenager followed him into adulthood,” Clark said. “He needed to have lots of things going on, lots of ideas.”

His teenage years weren’t easy, and in an interview this week his parents remember Skip as a handful, a “crazy” teenager, but one who grew into a wonderful man. Clark, too, remembered him as a crazy kid, but one whom everyone loved.

As a teen, Skip lived for a while with his grandparents, Elaine and Bill Brown, in Yellow Springs, and then moved to Xenia when his father remarried. But problems followed Skip, and he also spent time in a group home in Xenia, which was hard on him, according to Clark.

Yet after the turmoil of adolescence, Skip gradually came into his own. According to his parents, he got his start in the roofing business as a “storm chaser,” working in Florida for mobile construction companies that followed the destruction caused by storms. After a few years he went out on his own and started Legendary Roofing, the roofing business he ran in both Florida and Yellow Springs. For several years he and his cat, Tigger, lived in the garage behind Clark’s house that he had turned into an apartment, before moving to the East Enon Road duplex his grandmother owned.

In that new space Skip developed a new passion, creating a gallery to hold the work of his great-grandfather, Axel Bahnsen, a well-known area photographer. He put his heart and soul into turning space in his apartment into a gallery, draining his savings, according to Clothier.

“His dream was to make that happen,” Clothier said. The two met when Clothier worked in a camera store in Fairborn, and they quickly became close, bonding over photography. Along with his admiration of his great-grandfather’s work, Skip bought himself a camera and began taking pictures. And he became a good photographer, according to Cady, who worked with Skip on his gallery website. Some of Skip’s photos can be seen on his Flickr account, at http://www.flickr.com/photos/87761329@N00.

Skip’s dream was to make the gallery into a destination spot, a place on the western edge of the village where visitors could stop on their way into town. For the first time this year, the Bahnsen Gallery was a stop on the Artist Studio Tour in October, and Clothier remembers how happy Skip was, during the event.

“To see how his face lit up, having people show up,” said Clothier.

Skip’s goal in creating the gallery wasn’t making money, according to Clothier, but rather, sharing with others his love for art. And to Cady, part of Skip’s motivation came from his love for his grandmother, Elaine Brown, who was Axel Bahnsen’s daughter, and had earlier tried to exhibit her father’s work.

“He cherished his grandmother,” Cady said.

Elaine Brown also cherished her grandson. This week she spoke of her loss.

To Clothier, Skip was the most generous and supportive friend he ever had. Along with his own dream of creating a gallery, Skip supported Clothier’s dream of buying a building and starting a restaurant in Miamisburg. Skip was equally supportive with other friends, Clothier said, offering support and encouragement for them to follow their dreams.

One of Skip’s longtime friends was Sherri Mendenhall, who also died in the shooting. She was very close to Skip, according to several who knew him well, and while the two may long ago have been involved romantically, they were now good friends and business partners, with Mendenhall handling the business side of Legendary Roofing.

“They were a terrific team,” Elaine Brown said this week. “She wore many hats in Skip’s life.”

Mendenhall had moved to the apartment next to Skip just a few months ago from the East coast, and seemed to be making a new start in life.

While those who love Skip feel an excruciating loss, the world has also lost a unique and caring individual, according to Skip’s brother, David Brown, remembering how his brother shared his possessions, his enthusiasms and his sofa with anyone who needed inspiration, or a place to stay the night.

“Skip’s good people,” he said this week. “There’s not enough good people in the world, and now there’s one less.”

2 Responses to “A beloved villager is lost”