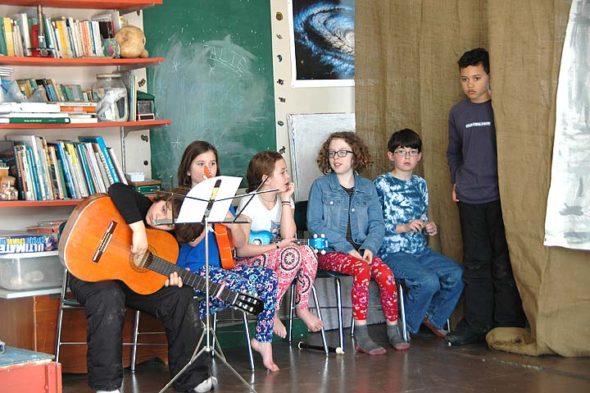 The Antioch School’s Older Group was recently immersed in storytelling and theater, thanks to special guest Christopher Westhoff, of the Mad River Theater Works performing arts company, who spent a portion of each day last week at the school. Westhoff helped students develop their own play about the life and influence of retired Older Group teacher Bill Mullins, which they performed last Friday. Pictured, from left, are Max Florkey, Merida Kuder-Wexler, Ayla Current, Lucy Dennis, Jackson Grote and Antonio Chaiten. (Photo by Carol Simmons)

A recent theatrical storytelling residency at the Antioch School became an opportunity for the fourth- through sixth-grade students in the school’s Older Group to learn and share a story from their own community history via the medium of live theater.

Christopher Westhoff of the Mad River Theater Works performing arts company, spent portions of each day last week working with the 21 students in Sally Dennis’s class on a project that focused on the life and influence of retired Older Group teacher Bill Mullins, who continues to work with students as a volunteer math instructor. The residency culminated in a Friday afternoon performance for the school community.

But the class had laid the groundwork for Westhoff’s five-day visit even before the actor and director came to campus. Mad River’s typical residency process involves gathering oral histories and shaping a play from the results. The Antioch School’s Older Group had spent several weeks prior to Westhoff’s arrival conducting interviews with the subject of their project — Mullins — as well as various people who had worked with the storied educator or knew him well. The summaries of interviews with such people as Bill’s wife, Shirley, and his classroom successor, Chris Powell, filled large pieces of paper taped across one wall of the Older Group’s classroom. With Westhoff’s entrance, the opposite wall began filling with papers listing aspects of planning the stage production — script highlights, scriptwriters, cast and crew, musicians, sets and costumes.

Westhoff served as facilitator, offering upbeat professional focus and guidance -— with support from teacher Dennis and art instructor Sarah Strong -— but the students created the work. Jackson Grote, who played the part of the late former school Director Louis King, said on Thursday that the students were involved in every aspect of the process. “I helped type (the script) up, because I like typing,” he said.

Thursday was the day the class was set to put everything together in a full run-through on the stage in the arts and science room.

Before the students took their places, however, Westhoff went over the day’s purpose noting that “like music, a show has a tempo, too. We want a good tempo for this show.”

He suggested that they think “in terms of big to little,” to ask “what’s the biggest thing?” that’s happening. “Let’s be big picture. If you have an idea that’s a little picture, try to remember it and bring it up later, so it doesn’t interrupt the big picture.”

And finally, he reminded everyone that “when you’re not involved in something at the very moment, it doesn’t mean you’re not part of the company.”

Although cautioned against “goofing off,” the students were given plenty of room to have fun with the process. A group of student musicians on stage right set the mood, and a trio of narrators on stage left set the scenes. Several well-placed jokes helped keep the tone lively.

The young thespians took great delight in noting: “That’s not a happy song!”

After showing a variety of other unconventional things Mullins introduced to his Antioch School classroom, including the now ubiquitous unicycle — the students concluded the performance by singing new lyrics to the tune of The Titanic.

“We are glad. We are glad. That you started traditions we still do. Camping and plays. Unicycles in parades. We are glad that you made the school this way.”

Throughout the staging, resident artist Westhoff offered suggestions and prompts. “How do you feel,” he asked one actor about her character’s state of mind hiding in a World War II bomb shelter. “Terrified,” she replied. “Good. Hold onto that.”

Later, when the audience hears about Mullins’ classroom pets: “How do we show a snake? How do we show rats that roam around the classroom? … Is there a hamster someone could hold?”

A quick scramble came up with a long, stuffed snake and the Younger Group’s classroom hamster.

The Mad River Theater Works residency was made possible by contributions to the Emily Bailey arts fund, said school Manager M.J. Richlen. The fund, which honors the memory of Antioch School graduate Emily Bailey, was founded by her parents Rosemary and Jim Bailey after her death in 2000. In addition to supporting a variety of artist residencies over the years, the fund also has provided year-long music instruction at all grade levels for the past two years by music educator Dennis Farmer.

“We really appreciate the generosity” of the Bailey family and the Emily Bailey Fund contributors, Richlen said.