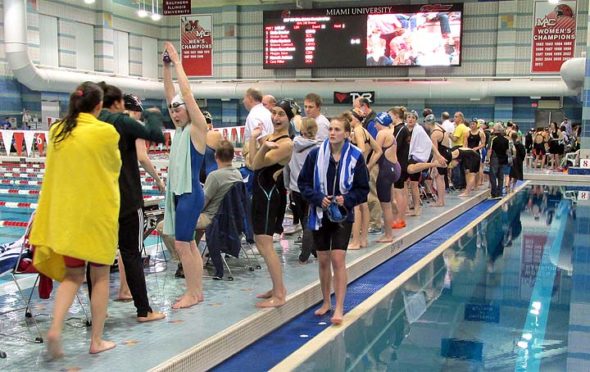 YSHS swimmer Olivia Chick walks along the edge of a pool, her home away from home, during the recent division finals. Her finishes awarded her a spot in the upcoming state meet. All Bulldog winter sports teams recently finished regular season play. (Photo by Dylan Taylor-Lehman)

This week’s unseasonably warm weather reminds us not only of the inexorable march of seasons but the inexorable transition from one batch of Bulldog sports to another. The winter sports season has come to a close, and aside from the YSHS girls basketball team and a lone swimmer who will be competing in a state tournament, basketball, bowling and swim fans will have to wait for another year to cheer on their favorite sports. A few coaches and players provided an overview of the 2016–2017 season, which saw, among other developments, the introduction of an entirely new sport and the remarkable comeback story of a team that had a disappointing performance last season.

The Yellow Springs girls basketball team excelled in the first round of the Division IV sectional tournaments this past weekend, beating the Bradford Lady Railroaders in a razor-thin 42–40 victory. The Bulldog’s 13–10 regular season and their success at sectionals is a marked improvement from last year’s 2–20 season.

Senior Liz Smith credited the team’s turnaround to a widely-held attitude that the players weren’t going to have a repeat of the 2015–16 record and an intense focus on developing individual players’ strengths and skills. Smith said that this emphasis made players more confident in their approach to the game. Players with “high basketball IQs” make the team play better, she said.

Part of the team’s strategy in the game against Bradford was to get the opposing team to foul-out, Smith said. They had success in this realm, inducing the opposing team’s best player to be taken out of the game. In addition, the Bulldogs nailed some crucial shots. Smith said in instances like these, she is so invested in the game that she can’t even hear her mom yelling from the bleachers.

This season the boys’ basketball team was getting used to functioning as a cohesive unit, as many of the starting lineup graduated last year and put this season’s team on the spot.

It was a slightly tough position to be in, as there was considerable expectation surrounding the team based on last year’s success, said assistant coach Phil Renfro earlier in the season. Last year, the team finished with a record of 21–7 and made it to the Division IV regional finals. But the team can only get better as the players’ skills coalesce, he said, and the team’s excitement about the progress they’ve made during the season and the genuine desire to work hard no doubt means they will.

The team finished with a record of 5–17.

It is hard to believe the Bulldogs are almost done with their swimming accomplishments of the 2016–2017 season, said coach David Hardwick. Last week, four members of the girls’ team competed in the Southwest District Swimming Championship, the final stage before making it to the State meet.

Captain Olivia Chick was in all three of the remaining events that highlighted the team’s District run. Her efforts were all top notch as she placed a third and fourth in two events. She finished third in the 100-yard freestyle, only two seconds behind the winner who set a new record in the race. In her second event, Chick finished fourth in the 100-yard backstroke in 57.01 seconds, a personal record in this event. Overall, her finishes in both of these events qualified her to go on to the state championship.

The final event of the day was the 400-yard freestyle relay. The Bulldogs “gave it their very best and swam their hearts out,” Hardwick said. The girls’ team, consisting of Chick, team captain Hannah Morrison, Jude Meekin and Sara Zendlovitz, finished in 4:27.52, a “good season-ender,” according to Hardwick.

Chick will go on to state, the last Bulldog swimmer in competition. The meet prelims start on Feb. 23, and will be held in Canton, Ohio.

Bulldog bowling was the newest sport for YSHS athletes this year, and while its inaugural season may not have resulted in a run for state, it proved a ton of fun for the athletes. Most bowlers hadn’t done a whole lot of bowling aside from the occasional outing, but they found themselves improving immensely and immersed in the cutthroat world of tournament bowling.

“On the whole, the season went really well,” said coach Matt Cole. “The kids that were there really wanted to be there. Most got better, but if they didn’t, they sure liked being around each other.”

Last week was the team’s last outing. The Bulldogs were one of 26 squads that competed in the Division II sectional tournament. Cole said the season finished “magnificently,” with bowler Duard Headley scoring an impressive 186 and Lily Bryan bowling a game that was essentially only spares and strikes.

Cole said that the team was consistently excited to learn new techniques, and that excitement helped them learn and improve. His excitement as a first-year high school coach was evident too, as he was told on more than one occasion that his enthusiasm was evident from anywhere in the bowling alley.

Learning the ins-and-outs of high school bowling was eye opening, Cole said, as it was his first time navigating the procedures and processes of the high school bowling world. One crucial lesson was the importance of well-timed eating. During matches, bowlers are not allowed to leave the area, talk to their parents or have food by the lanes. At one match, this meant that the bowlers couldn’t eat for almost six hours.

With this lesson learned (and disaster from being hangry avoided), many students walked away from the season with bowling fever. Many are planning on coming back as veteran Bulldog bowlers next year and around half of the team will go on to bowl in a spring league for people 22 and under. Cole is looking forward to his return as coach as well.

“It was a great group of kids,” Cole said. “I’m very proud of them. I’m grateful to be their coach and to share my love of the sport with people in the community.”