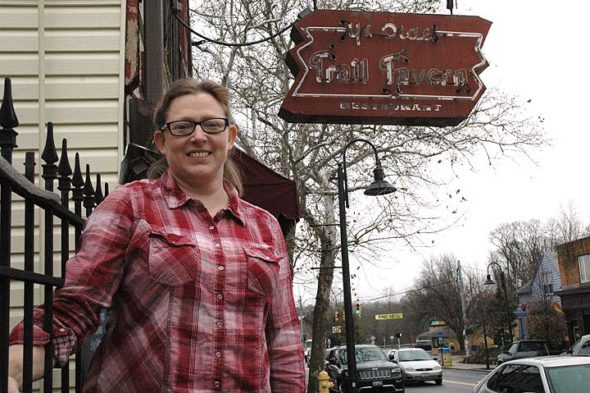 Ye Olde Trail Tavern changed hands last month. Christine Monroe-Beard, pictured here, and her husband Don Beard, co-owners of Peach’s, have taken over the tavern run by Cathy Christian since 1986. The tavern is closed for renovations and will reopen in mid-March or early April. (Photo by Audrey Hackett)

The inside of Ye Olde Trail Tavern is a mess. But it’s meant to be that way — temporarily. After being owned by Cathy Christian for 30 years, one of Yellow Springs’ oldest buildings is in new hands, and those hands are hard at work.

“We’re sprucing,” said Christine Monroe-Beard last week, waving in workmen with one hand and clearing off a place to sit with another.

She and her husband, Don Beard, co-owners of Peach’s, recently purchased the tavern from Christian. They finalized the sale on Tuesday, Jan. 17, and started renovations the next day. The couple expect the tavern to be closed until at least mid-March while they remodel the kitchen, install a new bottle cooler out back and a walk-in freezer and cooler upstairs and make a few changes to the interior and décor.

But nothing will be altered too much, Monroe-Beard said. The name’s not changing, and the new owners are even hoping to keep the phone number the same.

Still, longtime patrons might want to take note — those iconic dollar bills with customers’ signatures and doodles? They’ve been taken down. “Too hard to dust,” Monroe-Beard explained.

Owning Ye Olde Trail Tavern, a local landmark, is a dream come true for Monroe-Beard, who worked there for several years in the 1990s. “I just fell in love with it,” she said. Her husband, too, has been a tavern fan since the ’80s. “I love the Trail,” he said.

The couple has wanted to buy it for a long time, according to Monroe-Beard. But Christian wasn’t ready to sell until recently.

Christian bought the tavern in 1986 from her father, Roger Hart, who owned the property for just a few years (though continued as owner of Kings Yard until his death in 2009). Many people in town assumed he gave it to her, she said in a recent interview, but that wasn’t the case. Just 27 years old at the time, she managed to get a loan from the former Miami Savings Bank, selling “everything I had” to guarantee her first month’s operations.

The tavern flourished under her ownership. A big change came in the 1990s, when I-675 was built and the bike path opened in Yellow Springs. “That really opened up the tourist trade,” she recalled. Summer has always been tourist season, with the rest of the year more geared to locals.

Talitha Greene is one Yellow Springer who has enjoyed the tavern for years. “It was my first real job,” she said recently. She’s returned as a patron ever since. “It was always a welcoming place. They had cheese balls — what else do you need?” she joked.

The tavern is special to many in Yellow Springs and beyond, Christian said. “People just feel this connection to it. Once they make the connection, it doesn’t leave them,” she explained.

Letting go of the business after 30 years was bittersweet, but she knew it was time to retire. A Springfield resident, she has other plans, including managing several properties at Indian Lake.

“I’ve really enjoyed it. I bought myself a job, and it was a passion of mine to do it,” Christian said.

For tavern staff, many of them local residents, the sale means a loss of employment, though with a potential for rehiring after the tavern reopens this spring. The tavern employs 13 people in the winter and up to 28 in the summer, according to Chrstian, who declined to discuss the impact of the sale on staff. One staff member, Stewart Miller, was with the tavern for 26 years in various roles. “I called him my ‘glue,’” Christian said.

According to Monroe-Beard last week, five to six tavern employees have contacted her so far about working at the reopened establishment. Those employees will be part of the general hiring pool and will be contacted for interviews if they meet the new owners’ criteria, she said. Several staff from Peach’s have also expressed interest in picking up more hours at the tavern. Hiring will take place just prior to the tavern’s March or April reopening, but Monroe-Beard is not yet sure how many staff will be hired at that time.

At least one staff member is already in place, however. Matt Willis, a longtime Peach’s employee, has been hired as kitchen manager, a new position at the tavern that Monroe-Beard anticipates will help the kitchen there run more smoothly. “He’s a great guy in the kitchen,” Monroe-Beard said.

The new owners plan to run the tavern as they do Peach’s, which Monroe-Beard said is notable for staff efficiency and low staff turnover. Both she and Beard will be general managers of both places, but her role at the tavern will be more prominent.

Beard has owned Peach’s since 1997, and Monroe-Beard joined him in ownership after the couple married in 2009.

A history buff, she’s drawn to the tavern building, which reportedly dates back to 1847. She’s even begun researching the building’s original owners, German-born Franz Hafner and his wife, Mary Ann Sroufe, on Ancestry.com, intending to create a family tree. The best she can tell, the original portion of the tavern building was constructed by the Hafners first as a residence, then added onto and run as a bakery. Only later did the structure evolve into a tavern.

Monroe-Beard plans to introduce several German dishes to the tavern menu “to pay homage” to the original owners. The revamped menu will feature “German street food,” she said, including bratwurst, German potato salad, sauerkraut and a Turkish-German fusion dish called döner kebab, alongside tavern standbys such as grilled cheese and hamburgers. She’s also making changes to the beer lines.

Christian observed that when a building is this old, “you’re not really the owner — you just manage it for a period of time.” Preserving the tavern’s legacy was important to her in negotiating a sale of the business, she said, and she’s confident she’s found the tavern’s next worthy “managers” in the Beards.

The couple said last week they’re committed to seeing the tavern into its next chapter.

“We’ll take care of it for as long as it’s around,” Monroe-Beard said.

One Response to “‘Olde’ tavern gets new owners”