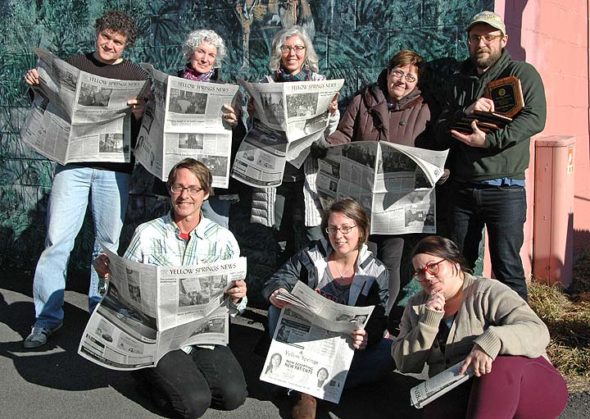 For the seventh year in a row, the Yellow Springs News won the top prize among weekly newspapers of its size at the Ohio Newspaper Association’s annual convention. The paper also came home with 14 individual awards, in categories ranging from editorials to advertising design. Pictured here is the award-winning team of (back row, from left) Matt Minde, Diane Chiddister, Audrey Hackett, Kathryn Hitchcock and Dylan Taylor-Lehman, as well as (front row, from left) Robert Hasek, Suzanne Szempruch and Lauren “Chuck” Shows. (Photo by Matt Minde, Suzanne Szempruch and the timer)

For the seventh year in a row, the Yellow Springs News came home with the top prize in the weekly newspaper contest at the Ohio Newspaper Association’s annual convention. The convention took place last Wednesday and Thursday, Feb. 8 and 9 in Columbus, and the keynote speaker was Ohio Governor John Kasich.

The News won the Newspaper of the Year award in Division D, which included 10 papers and is the size division of papers with circulations under 1,849. The News has a circulation of about 1,700.

The Newspaper of the Year is presented to the paper in each division that won the most individual awards, and the News won 14 awards, including first place in in-depth reporting, feature story, original columns, editorials, news photo, design and advertising. The judges were journalism faculty members at Ohio state universities.

The News won first place in in-depth reporting for its 2016 series on the Beavercreek police shooting of John Crawford. According to the judge, “In this small town newspaper, we see what is too often missing from major metropolitan newspapers, network and cable news: context. How many in-depth reports have you seen on network television about how officers are trained? Diane Chiddister and Dylan Taylor-Lehman provide context for what happened in this instance. In four paragraphs, the reporters provide information to any thoughtful reader that will make the reader stop and think about how and why this tragedy happened. Time and again, the Yellow Springs News team reports with precision and detail, details crucial to our understanding of what happened and why…” The series was written by Reporter Audrey Hackett, Editor Chiddister and Reporter Taylor-Lehman.

Hackett also won first place in Best Local Feature for her May, 2016 story on Zay Crawford, “Becoming Zay: growing up trans.” The story was an “Interesting, contemporary story well told,” according to the judge. “Multiple sources. Good details from observation.”

The second-place prize in feature stories (there were three prizes altogether) also went to the Yellow Springs News, for “Just don’t call it a garbage dump,” by Taylor-Lehman, a story on the Rumpke dump outside of Cincinnati. “Nicely done. Good use of quotes and multiple sources. Strong writing,” the judge stated.

In the category of Original Columns, Hackett also took first place for her column, “The Moment After.” According to the judge, “The Moment After” columns are “imaginative and exquisitely composed. Whether writing about the snow or the moon, chance encounters on the street or the human ability to empathise, Audrey Hackett is unfailingly eloquent … Such felicity of expression is rare in the columns of local newspapers.”

The News also took second prize in the Original Columns category, for “Yarn Registry” by Taylor-Lehman. According to the judge, the columns “find the wonderful in the mundane. Dylan Taylor-Lehman gives voice to people that many readers would never hear about — a stand-up comic, a book indexer and a dead historian. In the process, he reveals the richness of the community he lives in.”

In the category of Best Editorial, the News took two out of four places in a competition in which papers competed with all 37 of the weekly papers rather than just those of their size category. The November 2015 editorial “End Task Force involvement” by Diane Chiddister, which argues that Yellow Springs should drop out of the ACE Task Force, took first place.

According to the judge, “This is a great editorial, identifying faults with a combined task force and forcefully arguing that the local police department no longer remain associated with it …The writing is cogent, forthright and well-researched rather than polemical.”

The News also took third place in Best Editorial with a 2016 editorial about the effects of utility rate increases on local affordability.

The News won first place in overall Design with two papers from the month of January, 2016. “Clear, consistent and orderly. Easy-to-read goes a long way. Well edited with smart headlines. This publication stands out in its category,” the judge wrote. News design is the responsibility of designers Matt Minde and Suzanne Szempruch.

Minde and Szempruch also won first place in Advertising for several ads they designed. “Very nice use of typography and sparing, but effective use of graphics,” the judge wrote. “The ads stand out, but they are rarely too busy or overdone. Excellent and effective advertising for a variety of clients.”

The News also won first place in Division D for Best News Photo, for a photo taken by Minde of the community march on Martin Luther King Jr. Day in 2016. Second prize in Best News Photo also went to the News, for a photo by Taylor-Lehman of a die-in at the Beavercreek Walmart, protesting the Crawford shooting.

In the category of Best Feature Photo, Hackett won second place for the photo of Zay Crawford and her parents celebrating together at her naming ceremony last year.

And in the category of Special Edition, the News won second place for the 2015 edition of the Guide to Yellow Springs, which featured articles about the collaborative projects between the village and Antioch College.