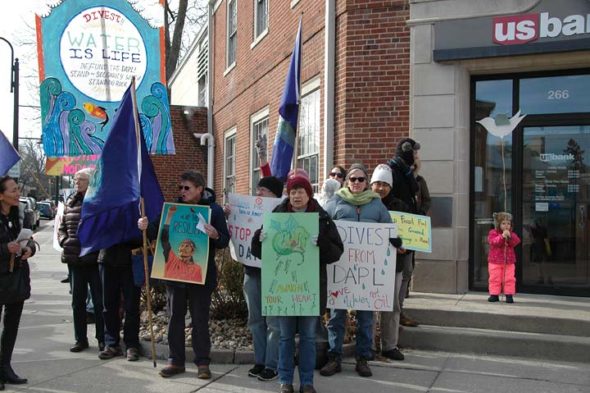 At least 90 people turned out for a peaceful protest at U.S. Bank last Saturday, including one of the youngest in the crowd, Harriet Christle, nearly 3, pictured here with her paper bird. Organized by villager MJ Gentile, Saturday’s action sought to highlight U.S. Bank’s lending ties to the Dakota Access Pipeline and private prison operators. Several demonstrators closed their accounts Saturday, while others sent letters to the bank’s CEO to express their concerns. (Photo by Audrey Hackett)

Some pull ‘green’ from local bank

Megan Bachman has been banking with U.S. Bank since she was 15 years old. “It was the first account I ever had,” she said. But last Saturday, Feb. 4, she decided to move her money elsewhere.

Bachman was one of dozens of villagers who either closed their accounts with the local U.S. Bank branch or signaled their intent to do so based on concern over some of the bank’s lending activities. While villagers interviewed for this story emphasized their appreciation for the local branch and its employees, they voiced dismay that U.S. Bank lends money to companies involved in the Dakota Access Pipeline, or DAPL, as well as to firms operating private prisons.

“Not in my name,” Bachman said.

Local protestors say they oppose the highly controversial pipeline, which will transport crude oil from the Bakken oil fields in North Dakota to existing pipelines in Illinois, because it represents a massive investment in climate-harming fossil fuel extraction. And they believe the pipeline jeopardizes sacred lands and the water supply on the Standing Rock Sioux Reservation. Native American-led protests have been taking place on those lands for a year, halting pipeline construction and sparking related protests across the nation, including in Yellow Springs.

“Native people are putting their lives on the line,” said villlager Maggie Morrison on Saturday. “We’re standing in solidarity. It’s one small thing we can do.”

Dharma Center Board Member MJ Gentile organized Saturday’s action, which began at the Dharma Center with chants, prayers and talks centering on love of the Earth and the need to protect the environment in the era of climate change. Bearing handmade signs, a group of protesters marched — and sang — their way from Livermore Street to the corner of Xenia Avenue and Short Street, assembling peacefully in front of the U.S. Bank branch. At least 90 people took part, including Cathy Roma and about 20 members of the World House Choir, who led demonstrators in a mix of protest songs, labor songs and spirituals.

The music caught the imagination of one of the youngest protesters, Harriet Christle, nearly 3. Bundled in a pink snowsuit and clasping a sign that took the form of a paper bird atop a long pole, Harriet broke from the crowd, and her parents, to stand alone in front of the bank, swaying to the songs.

“It was a moment of such innocence,” Gentile said.

While other protesters sang outside, Irene Bedard, a Native American from Alaska who lives in Yellow Springs, led a small delegation of villagers into the bank to withdraw their deposits and deliver letters of concern from other local account holders. They were met by the bank’s district manager, Patrick Kelly, who helped facilitate the closing of accounts, according to participants.

For Bedard, it was a surprisingly emotional moment. “I came to tears. [Closing my account] was not a personal thing, about this branch and these people,” she said. But she felt good about withdrawing her money from companies whose activities she strongly opposes.

“You have to put your money where your mouth is,” she said.

Guy Jones, a Native American from Standing Rock who lives in Dayton, was another leader of Saturday’s action. “Collectively, we have the power to make changes to affect all of us,” he said. Closing an account is a small action, but it can have a ripple effect, he believes. “When U.S. Bank encourages pipelines and dependence on corporations to operate prisons, we have to act,” he said.

Villager Alex Melamed agreed. He took part in Saturday’s action, contributing a letter that stated his intention to close his U.S. Bank account if the bank didn’t respond constructively in 30 days. He said he was grateful to Gentile for raising his awareness about the issue.

“What I want is for my community to help me live up to my own ethical standards,” he said, adding that Gentile and others were doing just that.

According to Gentile on Tuesday, she has collected and mailed 60 letters from local depositors to U.S. Bank’s CEO stating their concerns with the bank’s lending activities as the basis for closing (or considering the closure of) their accounts. Additional letters have been sent independently, she said. While the total number of local accounts held by the Yellow Springs branch was not available, U.S. Bank currently has a majority of local market share, according to information accessed through the FDIC website.

Calls to District Manager Kelly and the corporate headquarters of U.S. Bank seeking comment about the effect of such customer actions were not returned on Monday.

However, one local impact may be an increase in deposits at the Yellow Springs Federal Credit Union. According to CEO Sandy Hollenberg, the credit union has seen a surge in interest in its services as well as new deposits in recent days from villagers stating their concerns with U.S. Bank’s lending activities. The credit union operates differently from big banks in that it loans out locally most of the money it takes in, Hollenberg explained.

“Our goal is to have 80 percent of our money invested in the community by way of making loans,” she said.

The local action takes its inspiration from a national “divestment” movement that’s been gathering steam in recent weeks. Protestors are targeting banks involved in financing the Dakota Access Pipeline, hoping to pressure them to stop lending to companies whose activities protesters oppose. More than a dozen large banks have been identified as having lending ties to the DAPL.

When Gentile learned recently that U.S. Bank, the nation’s fifth-largest bank, was among them, she resolved to organize locally in response. Her resolve has been bolstered by the success of divestment efforts now underway in Seattle.

“I was pretty inspired by Seattle,” she said.

That city is moving toward closing its accounts with Wells Fargo because of the bank’s role as a DAPL lender and other factors. The city of Seattle currently cycles about $3 billion through Wells Fargo, according to a Feb. 6, 2017, article in the Seattle Times.

There’s also been recent protest action taken against U.S. Bank. At the U.S. Bank Stadium in Minneapolis, protesters dropped a banner from the rafters urging U.S. Bank to divest from the DAPL during an NFL game on Jan. 1.

But Gentile emphasized that the local movement isn’t “against anyone.” Rather it’s about “our hearts awakening to the possibility that we can all be protectors — protecting our brothers and sisters and the Earth,” she said.

Gentile and fellow organizers will be demonstrating at other U.S. Bank branches in the area this week. A Feb. 15 meeting with District Manager Kelly is also planned.

“It’s pretty positive that he’s willing to meet with us,” Bedard said.

And, with Seattle as a model, organizers are urging the Village of Yellow Springs to reconsider its current relationship with U.S. Bank. During the citizen comment section of Monday’s Village Council meeting, Gentile described her concerns over U.S. Bank’s funding of “prisons and pipelines” and encouraged Council to “put money in what we believe,” such as renewable energy.

“I think this is critical,” Council member Marianne MacQueen responded.

Gentile believes the small actions of Saturday and this week could spur wider change.

“I hope it’s the beginning of a divestment movement in this area,” she said.