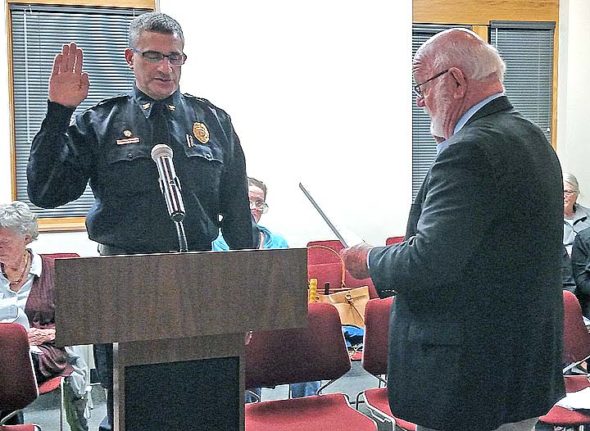 Interim Police Chief Brian Carlson was sworn in to his new job at Village Council’s Feb. 6 meeting, amidst statements of support from both Council and community members.

Carlson took the oath from Mayor Dave Foubert, who told Carlson that he “stands in a line of” community-minded police chiefs that includes Chief Jim McKee and Chief John Grote.

“We’re really pleased that Brian could do this,” said Judith Hempfling. “He has the trust of a lot of people.”

And in a statement to Carlson, Council President Karen Wintrow said, “You came to the process with a lot of ideas and a heartfelt concern for the community.”

Carlson was appointed interim chief two weeks ago, following the resignation of Chief Dave Hale. Hale had left his position suddenly in the aftermath of an incident on New Year’s Eve when four local officers attempted to shut down the traditional ball drop in a manner that many found overly hostile, aggressive and dangerous, including the attempted tasing of a young black man. Several hundred citizens attended a special Council meeting following the incident in which they demanded a more community-minded and gentle police presence in the village.

In a written statement to Council that he read at Monday’s meeting, Carlson stated that, “Our active mission for the Village of Yellow Springs Police Department is to consistently earn the trust of the residents and visitors in our community. We accomplish our mission through a team approach to proactive policing, continuing education and consistent communication with the community. We strive to be recognized as compassionate, respectful, highly-trained and innovative in our decisions as peace officers.”

The department is also looking at policy changes that will “bring us closer to the core values of the community,” Carlson said, including examining policies on use of force, use of verbal force and taser use.

“We are looking at ways to prioritize use of foot patrol and increase our level of community engagement,” he stated, adding that he is working with local churches, businesses, schools and volunteer groups “to improve communication and transparency between the police department and the community.”

Other changes include bringing in three part-time officers to provide personnel necessary for maintaining two officers on duty during high-volume times, Carlson stated. He also said the department, in an effort to improve safety, is placing four new crossing signs on Dayton Street at Winter and Stafford Streets, along with adding two permanent digital speed signs on Polecat Road and Corry Street, in response to citizen concerns regarding unsafe speeding in those areas.

Hempfling urged the community to give Carlson time to make the changes that he finds necessary.

“I want to calm down the sense of urgency,” Hempfling said. “We have a trusted person now as interim chief and we need to give him the time to be thoughtful and to do his job.”

“I want to say thank you to Council and I’m so happy you chose Brian,” she said, stating that Carlson is “one of the few officers who ‘gets it’” regarding the need for police to engage with the community.

In other agenda items related to police business:

• Village Manager Patti Bates submitted a report on a preliminary meeting held to discuss the Village Mediation Community Police Relations Initiative project, a collaborative effort between the Village and Village Mediation, attended by Bates, Council member Marianne MacQueen, Interim Chief Carlson, John Gudgel of Village Mediation, Linda Rudawski and Kathryn Hitchcock. The project’s goal is to “increase the positive and collaborative interactions between the police department and the community and create a more understanding relationship on both sides,” according to the report. To do this, officers initially will meet with Hitchcock and Rudawski, who are trained facilitators, to discuss their experiences policing in the community.

“The general feeling of the group is that officers need a safe environment to express feelings and that these interactions, along with the community and officers, can contribute to healing,” the report states.

The project next aims to bring to the conversation stakeholders from various key groups in the community, the report states.

Interim Chief Carlson expressed support for the project, stating, “The sooner, the better.”

• Gavin Davore Leonard of The 365 Project told Council that a subcommittee of that group has finished a draft of “Guidelines for Village Policing” that includes principles and a vision statement aimed at enhancing the relationship between police and the community. Council members had not yet had a chance to read the document, and it’s not clear what the next steps will be, according to MacQueen. Villagers interested in seeing the document can access it on the The 365 Project’s Facebook page at http://bit.ly/365policeguidelines.

“He served the community with dignity, grace and kindness,” Simms said.

• Council will meet at a special meeting at 7 p.m. on Monday, Feb. 13 to announce the results of the investigation of the New Year’s Eve incident. Attorney David Williamson, the independent investigator hired by the Village, will be present to give a report on the investigation.