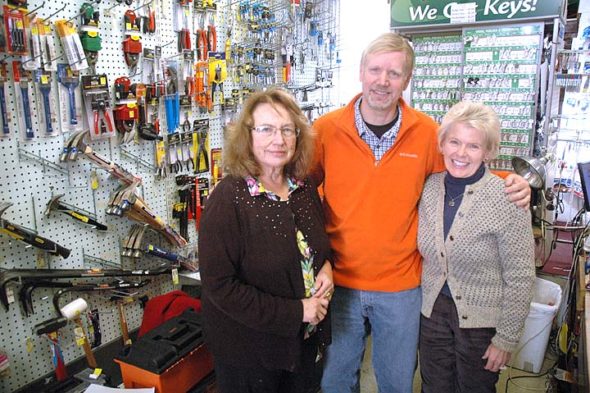 Yellow Springs has had the same hardware more than 90 years, yet it has changed hands only three times. Kathy Macklemore, left, who has managed the store for 16 years, is pictured here with the new owners of Yellow Springs Hardware, Shep Anderson and Gilah Pomeranz. The couple took over at the beginning of January, though Macklemore will stay on as manager. (Photo by Matt Minde)

Consider this bit of village continuity: there has been a hardware store in Yellow Springs for more than 90 years, and throughout that time, it has changed hands only three times. To get a sense of living town history, one has only to walk downtown and take a look at what is now called Yellow Springs Hardware on the corner of Xenia Avenue and Short Street.

One of those three changes of hands happened just recently, when the reins were handed from the Downing family to villagers Gilah Pomeranz and Shep Anderson, who officially became the store’s new owners on Jan. 2 of this year. The store is the couple’s first foray into running a business, and while they recognize the challenge ahead of them, they are passionate about their new endeavor and have jumped right into the world of small town hardware stores.

When it became known that they had bought the business, the couple found they were often asked if it was going to remain a hardware store. To answer that question, Pomeranz offered an emphatic “yes.”

“It has been a hardware store for 90 years,” Pomeranz said. “We want to honor that heritage and history.”

Pomeranz, who grew up in Yellow Springs, and Anderson have been long-time patrons of the store, and they got to know previous owner John Downing and his sister/store manager Kathy Macklemore over the course of their patronage. In early 2016, they learned that the Downings were looking to sell the business within four or five years. Pomeranz and Anderson got to talking about buying the store and decided four years was enough time to prepare. But in April 2016, the Downings told them the time frame had sped up and they wanted to sell the store by the end of the year. According to Pomeranz, though it was earlier than they’d expected, they “decided to take the plunge.”

In July 2016, the couple signed a letter of intent to buy the store, and sales negotiations took place through December. The final papers were signed on Jan. 1, and the store, formally changed hands the next day. As of Jan. 2, the hardware store in the village is called Yellow Springs Hardware.

The new owners were good candidates to co-manage a new business venture, as one of the things that brought them together was how well they collaborated in a professional capacity. They met at Sinclair Community College, where Pomeranz worked as a curriculum development specialist and Anderson as a department chair of the manufacturing program.

“We loved working together so much that we got married,” Anderson laughed.

The couple was looking for a project to undertake in their retirement years, and Pomeranz was on the verge of buying a lemon shake-up truck that she could seasonally operate at county fairs. But when the option to buy Downings came available, that prospect seemed to call them. The two got to work learning all they could about the hardware business. Pomeranz joked that they thought they could pare down inventory to duct tape and WD-40, but a recent trip to a hardware store trade show in Las Vegas quickly put the scale of the world they were entering into perspective.

The couple said the trade show was incredibly helpful and even had a workshop for new hardware store owners designed to help them learn the trade. The presentation was geared toward small, local businesses instead of big box stores, which was “perfect for Yellow Springs,” Pomeranz said. The couple are “lifelong learners” and relish the opportunity to try something new, she said, and the previous owners have been “terrific about teaching about the business and truly mentoring us.”

Pomeranz and Anderson have dropped the former Do It Best association and will instead operate as an independent business in order to have a little more flexibility in what they carry and how the store is run. The couple plans to tailor the inventory to the needs of village contractors and handypeople, including more green and environmentally friendly products. Eventually, they plan to host a meet-and-greet with area contractors and other entities with hardware needs, such as the Antioch maintenance department and the Village crew. Almost all of the staff is staying on through the transition, and so the relationships customers have come to appreciate will remain intact, Pomeranz said.

“We appreciate the value of local merchants knowing what you need,” she said.

“Knowing what the customer needs” has been the modus operandi of the local hardware store regardless of who has owned it. It has always been locally owned and run, and fostering a relationship that works with the community has long been the aim of the proprietors.

The earliest owners were the Deatons, who ran the store until it was taken over by the Downings in 2000. The Downings bought it from Wilbur Deaton, the son of founder Glenn Deaton, who opened Deaton Hardware Co. on Jan. 24, 1927.

According to an advertisement for the hardware store from 1956, the elder Deaton was an “ambitious clerk” at a Springfield hardware store who took it upon himself to open a store of his own. “Almost every man dreams of owning a well-stocked hardware store with all the various fascinating tools,” said the ad, and Deaton achieved this dream when he bought an existing hardware store on Dayton Street, which became the first location of the Yellow Springs hardware store. Though “first day sales were about like the weather at the time — mighty poor,” the store gradually made enough profit that Deaton was able to move to a bigger building on Xenia Avenue in 1936, in the location where it stands today.

Deaton was tragically killed in March 1949 by a drunk driver as he ran across the street to open the store for a customer on a Saturday night. His death was a blow to the community, and an article from the Yellow Springs News after the accident noted that it would not attempt a “full list of the commendable things Mr. Deaton stood for, for those who have known him longer would immediately appear to point out something we had missed.” The business was taken over by his son Wilbur shortly thereafter, and it remained Deaton Hardware Co. until 2000.

The most recent transfer of the store has made for a fairly emotional time for Mackle-more, who has worked in the store since her family bought it from Wilbur Deaton. A former accountant for an area marina, she became the manager of Deaton’s when her brother asked her to run the Yellow Springs store, one of three that the family owned.

After 16 years, Macklemore is on familiar terms with literally every piece of merchandise: she and the staff unload everything from the delivery truck by hand, process it and then put it on display in the store. She built up a familiarity with not only the location of everything in the store but also developed a thorough understanding of its use. Her father told her she should go down the aisles and learn about something new every day, and she did. It became a home away from home, something that Macklemore “put her heart and soul into.”

But while the ownership changed, Macklemore will remain as manager, helping Yellow Springs attend to its renovations, rehabilitations and plumbing emergencies. Chris Glaser, a Yellow Springs resident who owns Glaser Construction, said he has always enjoyed his experience at the store. That Yellow Springs has a hardware store saves him a trip to the next closest hardware store, which is far outside of town. Such equipment runs cost him gas and time, he said, and so he appreciates being able to pop into the store for a part or two while in the middle of a job.

Glaser also said that Yellow Springs has a lot of people doing their own repair or home renovation projects, meaning that the store will likely continue to have a steady stream of industrious local customers.

Pomeranz and Anderson aim to maintain the store’s relationship to the village and do justice to the history of the long-standing Yellow Springs business, one whose wares can be said to be quite literally holding Yellow Springs together. It’s a big project, but the new owners are up to the challenge.

“I know Yellow Springs, I know business — I can learn hardware,” Pomeranz said.