A hometown writer tells own story 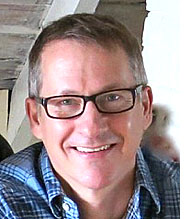 Chris Tebbetts, a Yellow Springs native and author of a few successful book series for young readers, will be speaking at the Little Art Theatre as part of their “Homecoming” series, in which people with interesting careers speak about their history and their craft. Tebbetts made a name for himself as co-author of the “Middle School” books, a series in which the protagonist “copes with the awkwardness of adolescence.” (Submitted Photo)

Chris Tebbetts has always had an interest in storytelling, and the successful author will be telling his own story soon in Yellow Springs, his hometown. In addition to writing his own novels, Tebbetts is the co-author of a number of books aimed at young readers. He has been able to earn a living from his art, an inspiring tale made all the more so because he has been able to do it on his own terms. For these reasons, Tebbetts will be the inaugural guest in the Little Art Theatre’s “Homecoming” series, which a press release describes as a series in which “famous Yellow Springers [return] home to catch up with the community through intimate and frank conversations” about their careers and their craft.

Tebbetts made a name for himself as co-author of the “Middle School” books, a series of seven humorous books in which the protagonist begins middle school and “copes with the awkwardness of adolescence: crushes, bullying, family issues.” The books are co-authored with thriller fiction heavyweight James Patterson, while Tebbetts co-writes another series, the “Stranded” books, with Jeff Probst, the host of TV’s “Survivor.” Tebbetts has also written a number of his own novels.

The “Homecoming” series is a benefit for the Little Art but represents a new way of fundraising, said Jenny Cowperthwaite, executive director of the theater. She didn’t want to do another auction or progressive dinner, she said, as those sorts of events have been done many times before. As she brainstormed fundraiser ideas, she found it was easy to think of former residents who have interesting vocations. She was curious about the trajectory of their careers and figured other people might be as well.

“I would read about what people are doing and think, ‘Man, I’d like to sit down and ask them a bunch of questions,’” Cowperthwaite said.

Thus the “Homecoming” series was born.

Tebbetts will be appearing twice at the Little Art Theatre in March, and will conduct workshops with Mills Lawn students while he is in town. On Thursday, March 9, Tebbetts will give a presentation before a screening of “Middle School: the Worst Years of My Life,” which is based on the first book in the Middle School series. Tickets are $25 and grant the holder access to hors’ d’oeuvres, an unlimited champagne bar and a screening of the movie. Doors open at 6:30 p.m., with Tebbetts speaking at 7:30.

The theater will host a $5 matinee screening of the movie on Sunday, March 12, at 4 p.m. with a question and answer session to follow. Doors open at 3 p.m. and Tebbetts will be signing books in the lobby.

The life of a writer

Despite his considerable achievements, Tebbetts said in a recent interview that he is frankly “surprised at his own success,” as he did not set out to be an author. He originally attended college to become a filmmaker but decided that the hustle and bustle of the movie industry weren’t for him. His literary odyssey began when a friend of a friend put him in contact with a literary agent looking for an author to write a four-book adventure series about Vikings. From there, his life as an author took off.

Almost all of his books are considered “middle grade” fiction, which are works intended for 8–12 year olds. Tebbetts said he likes writing for this age group because it reflects the time before one’s teenage years, when youngsters are still taking in the world and awed by what is has to offer. Middle grade novels tend to be about a protagonist interacting with the larger world, while young adult novels, for 12–18 year olds, tend to focus on the protagonist addressing some kind of inner turmoil, a theme that reflects the self-consciousness characteristic of that time of one’s life.

Tebbetts described his writing as “spare,” full of fast-moving prose and page-turning events. As a movie buff, he is aware of the pacing of a movie and tries to mirror this in his writing. These qualities make the books especially accessible, said Kate Mooneyham, owner of Dark Star Books and Comics.

Each of Tebbetts’ co-author experiences has utilized a different approach to collaboration, he said. For example, Patterson will come up with ideas for a book and send Tebbetts an outline of what he wants to happen, and it is Tebbetts’ job to write a complete book from this outline. Tebbetts said he once read that Patterson was both laid back and intimidating at the same time. This is very true, he said, but he quickly found that he and Patterson were “creatively simpatico” when it came to bringing the vision to light.

With the “Stranded” series, Tebbetts said he has a bit more leeway in getting his own ideas into the books. His book “M or F?” which chronicles young people understanding their sexual orientations, was an “arranged marriage” situation orchestrated by the publisher, who brought together Tebbetts and co-author Lisa Papademetriou to write a book that the publisher wanted to see published.

Tebbetts is happy with the co-authorship arrangement, as the process reminds him of the collaborative storytelling of the theater. And it’s a fit for him temperamentally as well, he said. Like many writers, Tebbetts characterizes himself as an introvert and relishes the ability to work from home, unbothered by anyone else and having control of the world he is creating. Living in Vermont, one of the most rural states in the nation, makes for an environment where he can be fairly sure he won’t be bothered.

“The “Middle School” and “Stranded” series allow me to stay home and write while famous people are the face of the project,” Tebbetts said.

He has also discovered that small, homey towns are conducive to the creative process. Following growing up in Yellow Springs, Tebbetts, the son of Ilse and the late Cy Tebbetts, spent a number of years living in New York City. But he found himself moving to a town outside of Burlington, Vermont, and “settling back into small town satisfaction,” he said.

His hometown made an indelible impression on him and in fact serves as the inspiration for the town in “The Weakness of Gravity,” a novel that will be published next year. He was “creatively born at the Yellow Springs library,” he said, and he was fortunate enough to be around for the “heyday” of high school and village theater. Many of his books deal with the trials and travails of being in middle school, but Tebbetts said his experience was unusual in that he enjoyed that traditionally difficult time of life.

The fact that he liked middle school puts him at odds with the subjects of some of his books, who encounter endless frustration in middle school. Moreover, Tebbetts graduated from high school in 1982, which might pose a problem for someone trying to write from the perspective of a preteen. It can be difficult, he said, as many authors trying to speak in a teenage voice end up sounding like an adult trying to sound like a teenager. But he tries to harness what author David Corbett calls “coherent intuition,” in which an author tries to think and understand the intuitive thoughts and responses of a character. Once he gets into the flow of writing, Tebbetts finds he can believably think and write like the characters in his books.

Tebbetts acknowledges that he is competing with video games for young peoples’ time, which tend to have a “more immediate and visceral payoff.” While Tebbetts worries that it is getting “harder and harder to get kids [and adults] interested in books,” he hopes that positive associations with reading — such as providing readers with comedic books featuring relatable characters — will open the door to the larger world of the library.

As for his own middle grade recommendations, Tebbetts cited Roald Dahl’s books as perennial classics, especially “James and the Giant Peach,” and the Louis Sachar novel “Holes,” which he said does “what books ought to do.” He also said he appreciates the graphic novel medium, which is “great at bridging the gap” between nonreaders and lifelong bibliophilia.

More information on the “Homecoming” series can be found at littleart.com/homecoming. Tickets for the March 9 event can be reserved at brownpapertickets.com.