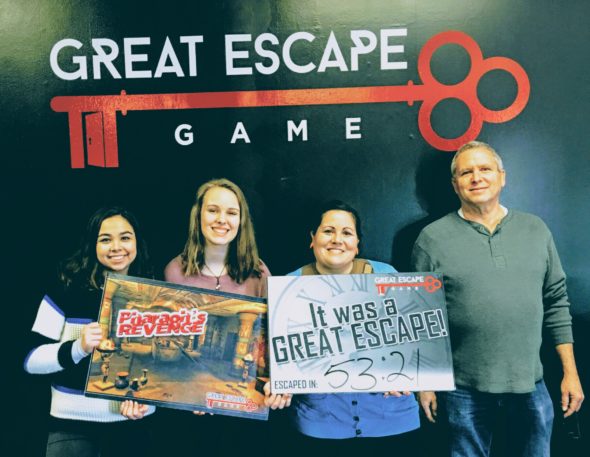 At the Great Escape Game in Beavercreek, (mostly) curse-free.

My family came from down south to visit this past week. My mom, dad, teenage sister and her friend drove the 12-13 hours it takes to get from the Florida Panhandle, as they do every spring, to hang out with me and my nuclear unit and eat, shop and generally just laze around.

I come from a loud family. We are a kinsfolk of volume — not just in decibels, but in how many words we can say or sounds we can make, and how often we can say or make them while someone else is already saying or making them. It’s just our nature. So you must keep this in mind when I tell you that we decided to spend one evening of our time of fellowship locked together in a cursed Egyptian tomb.

Also, no, not really.

My dad, my sister Madison, her friend Hailey and myself went to Great Escape Game in Beavercreek, one of the increasingly popular escape room venues popping up in the Miami Valley, the nation and the world. If you don’t already know, an escape room entails a group of people being locked in a room together with the goal of solving various clues and riddles within an hour in order to discover how to escape from the room. The games might have different themes and different storylines, but they all rest on the fact that everything you need to escape is in the room with you — if you’re observant enough and work well enough as a team.

Our team of four had chosen to play “The Pharaoh’s Revenge,” the premise being that we were a team of archaeologists sent by a rich magnate of some sort to retrieve “the Pharaoh’s treasure.” (Which Pharaoh was never specified.) According to the introductory video we watched before the game started, a warning written in hieroglyphs outside the Pharaoh’s tomb stated that anyone who entered and did not leave within 60 minutes would be cursed; the previous team of archaeologists who had attempted to retrieve the treasure were never seen or heard from again.

I can’t say much about what it looked like inside the escape room, or really what the gameplay was like without spoiling some of the mystery, but I will say that, before the door locked behind us, I knew I was going to have a good time.

And yet, as waited for the game to start, I had the kind of butterflies I used to get before public speaking as a kid. My anxiety quickened my breath. My palms were sweaty. I kept bouncing from foot to foot.

Earlier that same day, my husband Anthony and I had gone to a parent-teacher conference with my daughter’s kindergarten teachers at Mills Lawn. I’d had some of the same feelings of anxiety going into that meeting. Not that Lucy was in trouble or anything; the teachers were just checking in with all the parents to let them know how their kids were progressing in their first year.

I knew where my feelings of nervousness going into the meeting were coming from. Lucy is doing fine, even doing pretty well. Nevertheless, there was something in my head, some desperate little rodent gnawing away at the part of my brain that produces pride and self-worth, that was really hoping Lucy’s teacher would tell me she’s a secret genius.

It’s not something I’m especially pleased to admit; the whole deal is that you’re supposed to love your kid no matter how smart they are, right? And of course I do. But whether I like it or not, that terrible rat is in my brain, and it lives there full time, and it doesn’t just want to be fed; it wants to feast.

I know, through conversations with friends and loved ones, that I’m not the only parent who’s had these kinds of thoughts. It’s not unusual for parents to think their kid is the best kid in the whole world. At some point, though, some of us start wanting to hear the rest of the world acknowledge it, too. But why? Why, in a world where we love our children more than almost anybody else, would we care that much whether or not anybody else thinks they’re smart?

One answer is that we want our children to succeed, and be happy, and for this we want to be sure they have the best tools, the best resources, the best brains.

The obvious and real answer is that, if our kids are geniuses, we also, by extension, are geniuses.

Which is why I was shaking and sweating in the escape room when the door closed and locked and the clock started ticking. I was scared we’d lose. Not because we’d contract a horrible curse if we didn’t solve a bunch of puzzles in 60 minutes — and by the way, what kind of discount tomb-gods did this Pharaoh employ to guard his treasure if it takes a full hour for the curse to activate? — but because I wanted to be able to prove I was smart enough. Smart enough to break out of a fake Egyptian tomb, anyway.

In the end, with a lot of loud yelling — and more than a few hints from our game master — our team of four managed to break out of the cursed tomb with six-and-a-half minutes to spare. We had our photo taken with a sign displaying our completion time and floated from the building on a wave of triumph, out into the night and then into a Taco Bell for celebratory Crunch Wraps. It was a good night.

But after we’d all turned in and I was lying in bed, I started thinking about the help we’d gotten as we solved the puzzles. Could we have won the game if we hadn’t asked for hints? Would we have figured out some of the harder riddles on our own in the six minutes we’d had left? Surely it would have been a better win if we’d had no help at all.

The rodent was awake.

It occurs to me that it will always be there, rooting around for something to snack on. It’s the real curse, as it were, and in some ways, it’s good for me; at the very least, it helps me get my work done, makes sure I meet my deadlines most of the time. But if I must feed it, I hope I can remember not to let it feed off my child. As in the Pharaoh’s tomb, if she can get away from it early enough, maybe she can avoid the curse.