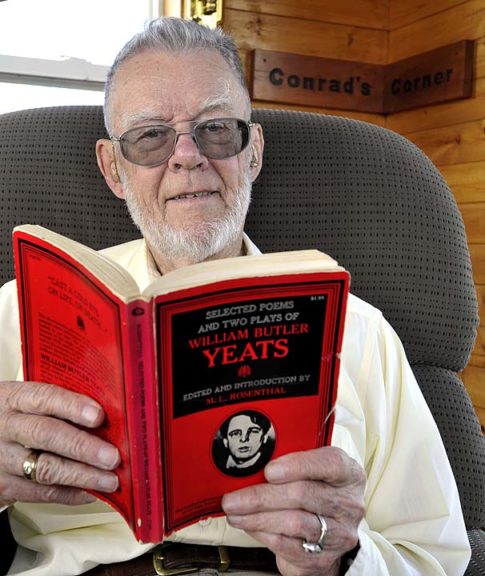 About a dozen area poets affiliated with the Tower Poets group led by Conrad Balliet, pictured above, will read from their new anthology, “From the Tower,” at the Emporium this Saturday, Feb. 25, from 3 to 5 p.m. (Submitted photo by Bill Lackey,
Springfield News-Sun)

Fine poems for a ‘towering’ figure

In the gesturing ashes,
canopies blacken;
a thousand voices
rise and fall—
They toll a strident
earthly demand.
So much depends on
what we hear then …

—From “Crows in the Trees,”
by Steve Broidy, included in
“From the Tower”

They call themselves the Tower Poets. They meet at the home of Conrad Balliet, just outside of Yellow Springs. They share poems, laughter and friendship. And raisin bread, freshly baked by Balliet.

“I kind of imagine it as England in the Brontës’ time … or a literary salon from the 1920s,” said poet Lori Gravley, a Yellow Springs resident who has been part of the group for over two years. “It’s a sharing of poetry. It’s warm, not a critique. And it always ends with raisin bread.”

Steve Broidy has been meeting with the group since 2001, when he moved back to Ohio to join the education faculty of Wittenberg University. He’d always loved poetry, but hadn’t written any for years. Yet somehow Balliet pegged him as a poet, and invited him to join the group.

“Conrad sniffed me out,” Broidy said.

Local poetry lovers can join this charmed circle, at least for an afternoon. About a dozen Tower Poets will gather at the Emporium on Saturday, Feb. 25, from 3 to 5 p.m., to read from their new anthology, “From the Tower: Poems in Honor of Conrad Balliet,” edited by Broidy and published in November by Main Street Rag. There will be wine and light refreshments. All proceeds from book sales at the event will benefit Tecumseh Land Trust. (Currently traveling abroad, Balliet won’t be in attendance, nor was he available to be interviewed for this article.)

Offered for sale locally at Dark Star Books, “From the Tower” features well over 100 poems by 27 poets in the Miami Valley, including several from Yellow Springs. Most are current or former members of the Tower Poets group. Some of the poets in the anthology, and at Saturday’s reading, will be familiar to listeners from Conrad’s Corner, the poetry show Balliet has hosted on WYSO since 1993. Thousands of area listeners have heard poems and poets — many of them local — on Conrad’s Corner over the years, said Gravley, who regularly reads her own and other poets’ work on the show.

Balliet is also the force behind numerous poetry readings and gatherings across the Miami Valley, and is a friend and mentor to many area poets, according to Broidy.

“He’s made the poetry scene in the Miami Valley what it is — he’s made it lively,” Broidy said.

Ed Davis, another Yellow Springs poet in the anthology, calls Balliet the “Poetry Godfather” of the Miami Valley. “He is,” Davis chuckled. Though not a member of the Tower Poets group, Davis has been interviewed by Balliet several times on Conrad’s Corner. And Balliet plays a role in the annual Winter Solstice Poetry Reading, which Davis has organized for five years.

An English professor at Wittenberg University for 30 years before retiring in 1991, Balliet is a well-known scholar of William Butler Yeats’ life and poetry. Balliet’s love for Yeats inspired him to build a tower on his property off of South River Road — the tower that would give the Tower Poets their name. Yeats once purchased a tower home in the west of Ireland, writing several of his great poems there. The “Yeatsian” tower on Balliet’s property initially served as the site for his poetry gatherings.

“For a while, the group met in the tower, but the winters got colder, and we got older, so now we meet in the living room, with a fire as needed,” according to Balliet in the anthology’s introduction.

“From the Tower” is a gift to Balliet, for the gifts he has given to area poets and poetry lovers over many years. Broidy, the editor, asked contributors to choose poems they knew Balliet liked or felt he would like. And many poets elected to preface their contributions with a few words about Balliet’s influence.

Several of the anthology’s poets also chose to dedicate a poem to Balliet. One such poem, Gravley’s “Utility,” begins: “A poem is a spoon / convex as the inside of the eye / and holding, like the eye, / everything / in a small pool of silver.”

A poet for many years, Gravley said Balliet helped “free me to become more productive,” by championing poetry as an everyday marvel, not a rarefied event.

“People don’t think of poems as useful things. But a poem is as useful as a spoon — it can hold everything in it,” she said.

The anthology reflects that spirit of inclusiveness. Some poems are funny, others poignant. The poems are universally accessible, some colloquial, others more formal. Subjects are as varied as voice and tone.

“Seasonal poems; poems about disasters, joy and sex; poems about crows,” Broidy said of the topics covered in the volume. Conrad is fascinated by crows as a poetic theme, Broidy explained, and several poets, including Broidy himself, honored that interest by contributing pieces about the inscrutable black bird. (The lines that begin this article draw from one of Broidy’s crow poems.)

“Conrad likes poems with structure, poems that are vivid enough to remember and quote,” Broidy said. “He’s a little bit of a classicist … though he’s open to all kinds of things.”

Despite being a lifelong poetry lover, scholar and champion, Balliet doesn’t consider himself a poet. Nonetheless, “From the Tower” ends with two poems by the non-poet poet, which reveal something of his poetic ethos and life outlook, Broidy said.

Poetic gifts aside, Conrad’s most enduring talent may be the art of creating a community around what he loves, according to Gravley.

“His attention to his passion has opened up in the Miami Valley an amazing love and venue for poetry,” she said.

“From the Tower” is testament to that.