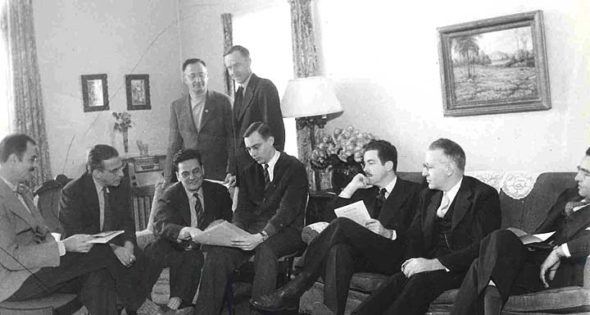 In its early years, the Antioch Review was edited by an editorial board, including the professors and administrators pictured here, in an archival photo from 1944. The Review recently published a two-volume 75th anniversary issue collecting “firsts, famous and favorites” from 1941 to the present. (Submitted photo courtesy of Antioch Review)

The Antioch Review is a “little magazine” — one of hundreds of small-circulation literary magazines in America. Yet with 75 years of continuous publication and a knack for picking and publishing a host of vital American voices, the Review is also undeniably “big” in impact and influence.

And so it’s fitting that its two-volume 75th anniversary issue totals almost 800 pages. The first volume, covering 1941 to 1961, came out last winter. The second and heftier volume, covering 1961 to the present, is now on newsstands. Volume two is a “doorstop of an issue,” longtime editor Bob Fogarty acknowledges in his introduction. Included in its almost 600 pages are 54 stories, essays and poems: scholar Theodore Peterson to poet Jeffrey Herrick, and a great deal in between.

Both volumes collect a sampling of “firsts, famous and favorites,” according to Fogarty, who chose all the essays and fiction and some of the poetry, with the Review’s poetry editor Judith Hall choosing the rest.

“It was very, very difficult to come to final selections,” he said in a recent interview from the Review’s offices on the second floor of Antioch College’s Olive Kettering Library.

The double-decker publication has plenty to celebrate. The Review is one of the oldest continuously publishing literary magazines in the country, a survivor where many other magazines have folded. And it continues to make its mark on American literary culture. Its authors are consistently included in Best American anthologies and the recipients of Pushcart prizes, and in recent years — 2009, 2010, 2011 and 2015 — the Review has been a finalist for the National Magazine Awards, going up against much larger publications like the New Yorker and the Paris Review.

“I’m very proud of it. We’ve kept at it — that’s what you have to do to be a success,” said Fogarty, its editor since 1977. Design editor David Battle and production editor  Jane Baker, both of Yellow Springs, have been in their roles even longer, since 1975.

Yet Fogarty acknowledged that the magazine’s success is in some ways improbable. The Review was founded by a group of Antioch faculty in 1941 as a quarterly journal of social and political opinion. It aimed to steer a course between liberalism and Communism, embodying an alternative democratic politics in a globally dangerous time, Fogarty explained.

The Review’s inaugural editorial in the spring of 1941 put it this way: “We believe that the social role of the intellectual in our time is to employ ideas to further democracy in the fullest sense. We believe in the promise of American life and we would seek for the seeds of that promise. This is our purpose in founding the magazine.”

A now-retired professor of history who joined the Antioch faculty in 1968, Fogarty knew the magazine’s founders, and he’s sought to preserve their vision and values, even as the Review’s emphasis shifted from the social and political to the literary. “I knew them and I knew what their preferences were — I’ve always tried to respect that,” he said.

Even early issues contained some literature, however. The Review “was not always literary, but it inched in that direction,” Fogarty explained. Witness early poems by Sylvia Plath and Mark Strand, the latter an Antioch graduate, both collected in the 75th anniversary issue’s first volume. During Fogarty’s tenure, the Review has flourished as a literary incubator, publishing an early story by Rick — then Hiram — Moody in the 1980s, and stories by Ha Jin, Aimee Bender and T. Coraghessan Boyle in the 1990s, before they became, well, Ha Jin, Aimee Bender and T. Coraghessan (or T.C.) Boyle. All of these writers appear in volume two.

Fogarty is the magazine’s primary shaper and tastemaker. The Review has no particular ideology, no allegiance to a “school” of fiction or poetry, he said. The magazine is outside the New York publishing scene, yet “totally aware” of it. “We’re not swayed by the fruit of the month,” he said.

When writers ask, as writers invariably do, what the Review is looking for, Fogarty has a single crisp answer: “Your best work.”

Many literary magazines solicit much of their content, but the Review continues to read “the slush” — the thousands of unsolicited submissions that pour in each year. Poetry editor Judith Hall makes poetry selections, while Fogarty makes essay selections and final fiction selections, helped in the latter by a team of volunteer readers, most from Yellow Springs. He loves finding “something terrific” in the slush.

“The greatest satisfaction I have is saying ‘yes,’” he said.

Fogarty is proud that the Review publishes writers on the upswing of fame, and equally proud that it stays loyal to authors whose popularity has waned “but are really good.” Short story writer Edith Pearlman appeared frequently in the magazine’s pages before she became a commercial breakout several years ago, at age 78. (Some joked that the magazine was in danger of becoming “The Edith Pearlman Review,” Fogarty said.) And the Review continued to publish fiction writer James Purdy, now deceased, after his dark and idiosyncratic stories fell out of fashion. Iconic stories by both writers appear in the anniversary issue’s second volume.

That focus on fine writing over literary faddishness has given the Review staying power, Fogarty believes. “We have two constituents: readers and writers. As long as you keep your eye on that, you’re okay.” He often says — quoting writer and editor Gordon Lish, a Review advisory board member — that the magazine “freely serves the heart and mind of the free reader.”

The free reader is, of course, free to disagree with the contents of the Review. An essay by Daniel Harris on the transgender movement angered some readers and online commentators when it appeared last spring. That’s not the first controversy the Review has stirred, but it was a searing one, according to Fogarty, with some dissenters accusing the magazine of hate speech in publishing the piece.

The free reader is also free to fiercely love a story, essay or poem. Fogarty’s ideal reader is actually a re-reader, the person “who puts the book down and starts to read it again.” He hopes people keep back copies of the Review for this purpose. Literature comes to us “when we’re ready for it,” he said, citing the power of a literary work to carry “enormous meaning” for our lives.

And that bodes well for the magazine, according to Fogarty. “There’s a hunger in this country for quality, a hunger for taste,” he said. The terms themselves may have fallen out of vogue, but the values remain, he believes.

Supported by subscribers and donors, as well as a subsidy from Antioch College, the Review is in decent financial shape, he said. It’s weathered its own and the college’s ups and downs, continuing to publish while Antioch was closed. Fogarty plans to celebrate the magazine’s 75th anniversary with an event in New York City, and perhaps another in Los Angeles. Meanwhile, writers continue to submit their “best work”; readers continue to read and respond; the magazine persists.

“I think we have a future, oddly enough,” Fogarty said.

Distributed nationwide and across England, the Antioch Review is available for purchase locally at Sam and Eddie’s Open Books, Tom’s Market, Town Drug and Mills Park Hotel. Individual issues and print and digital subscriptions may be purchased online at review.antiochcollege.org.