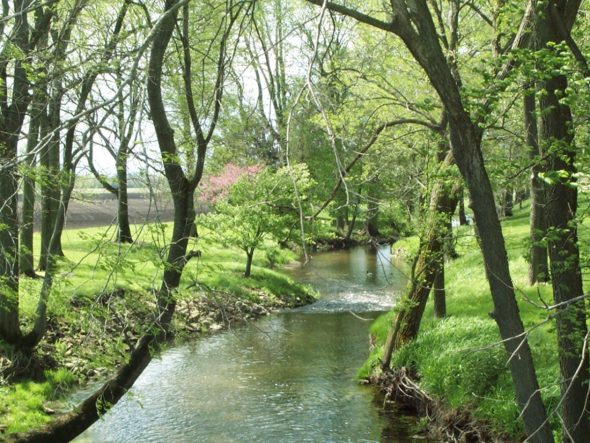 Citizens Against Mining is holding an ice cream social and sign-making party on Sunday, April 9, at Young's Dairy. The group is concerned about the impact of a proposed mining expansion in Mad River Township, north of Yellow Springs. One concern is preserving the ecology of the Mud Run, pictured here at a spot near Hagan Road. (Photo via citizensagainstmining.org)

Citizens Against Mining, a grassroots group, is holding an ice cream social and sign-making party at Young’s Dairy this Sunday, April 9, from 1 to 3 p.m. The group opposes the expansion of mining operations to encompass a 420-acre area in Mad River Township, just north of Yellow Springs.

The ice cream part: Dan Young of Young’s Dairy is providing coupons for free ice cream. The sign-making part: those interested in making signs to place in their yards should bring pieces of cardboard about 2′ by 3′ in size. The cardboard will be silkscreened with the Citizens Against Mining logo, with room to craft an individual message and design at the bottom. Attendees can also bring light-colored T-shirts for silkscreening.

The group will gather at the smaller picnic shelters south of Udders and Putters. All area residents are invited to attend.

Citizens Against Mining formed last month in response to the news that Enon Sand & Gravel had sought state approval to merge and significantly modify its mining permits to mine a 420-acre area north and south of Fairfield Pike along South Tecumseh Road. Currently, two small sand and gravel pits exist on a few acres of the property; the permit changes signal the company’s plans to mine a much larger area to a substantially greater depth. Approval has not yet been granted by the Ohio Department of Natural Resources, the state permitting authority.

The group hopes to stop the expansion, which it believes will have a variety of negative effects on township land and residents, including drying up or polluting water wells, contaminating Mud Run Creek and other surface water and lowering area property values. Several Clark County officials have also voiced concern or opposition.

The mining plans are not expected to directly affect Yellow Springs, but some local residents and organizations, including Tecumseh Land Trust, have expressed concern.

A more in-depth report on the proposed mining expansion and citizen reaction to it appears in the April 6 issue of the News.

More information is also available on the Citizens Against Mining website.