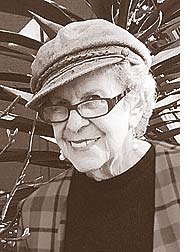 Long-time village resident Esther Rothman passed away on April 19, 2017, in Berkeley, Calif., at the age of 94. She was flown home and buried on Tuesday next to her husband, Phil, in the Glen Forest Natural Cemetery.

Esther was a person overflowing with enthusiasm, curiosity and laughter and she embodied loving-kindness.

Born in Philadelphia in 1923 as Esther Steinberg, she was raised in the Jewish section of South Philadelphia. Her father was an immigrant from Moldova; her mother was American-born. After graduating high school, Esther enrolled at Temple University, where she studied education and began her lifelong path as a teacher and educator par excellence.

While at Temple, Esther met Philip Rothman, who was also studying education. He had just returned from his service in the U.S. Army during WWII. Before long, they were engaged to be married, embarking on a six-decade life together, filled with travel, family, friendships, community and love.

Soon after their wedding, Esther and Phil moved to New York City, where Phil completed his Ph.D. After attending an academic job fair in 1954, Phil came home and asked Esther, “How would you like to go to a little town in the Midwest for a year?” Tired of city life with two young daughters (Carol and Bonnie), Esther jumped at the chance — and never looked back. One year turned into a lifetime of calling Yellow Springs home. There, they built their own house, had two more children (Alex and Jay), and became part of a loving, vibrant community for more than a half century.

In Yellow Springs, Esther had a four decades-long teaching career at all grade levels, beginning with kindergarten. She concluded her career by setting up and running the community-experience program at the high school. She obtained a Master’s Degree as a reading specialist from University of Dayton and loved helping young people with reading difficulties, especially middle school students, to engage with reading material that interested them — and many of her students attest that she helped turn reading, for them, from a chore to a joy.

Phil and Esther loved to travel and one of the highlights of their life together was the time they spent driving and camping across the country. They visited nearly every state in the United States, as well as Canada and Mexico, and spent sabbatical time in England, Nigeria, New Zealand, Yugoslavia, Poland and Japan. Highlights of their travel time included taking the postal boat to northern Norway and a freighter through the Panama Canal. But home, for them, was always ultimately the village of Yellow Springs.

In town, Esther was active in everything from the League of Women Voters to the Weavers Guild, from the Shakespeare Club to her beloved POETS group. She adored gardening and volunteered in the Friends Care greenhouse and in the Women’s Park. She also volunteered as a docent at the Springfield Museum of Art and was an active participant in the Dharma Center’s book group. She enjoyed hosting dinners and tea parties for her friends. She was an avid reader and remained a life-long learner and educator.

Esther’s teachings, her laughter and her goodness live on in her four children and 16 grandchildren (and more than a dozen great-grandchildren). Her family and friends remember Esther’s unconditional love and feel they have lost their biggest fan.