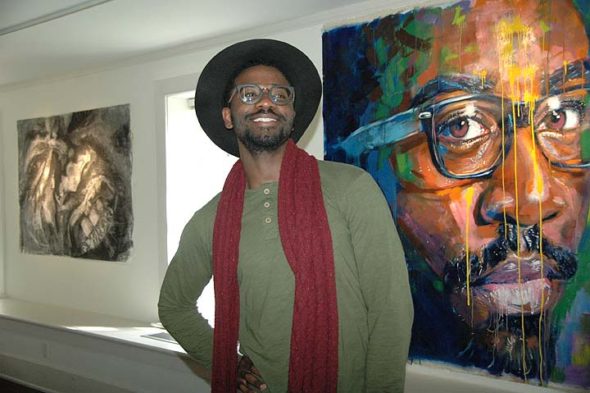 Antioch College’s Herndon Gallery is hosting “Schizomaica,” a show by Jamaican-born artist Kamar Thomas, currently visiting assistant professor of visual arts at Antioch. Up for a few more weeks, the show features 19 works in oil and charcoal, including “Selfie 3,” pictured here at right. A reception and painting demonstration will be held on Thursday, April 20, from 7 to 9 p.m. (Photo by Audrey Hackett)

In Herndon Gallery, surrounded by walls of his own face, artist Kamar Thomas looked around with curiosity. “It’s been a while since I’ve seen these,” he said.

The portraits are large — many are six or seven feet high — and intensely colorful. Each face has a penetrating gaze, sometimes several gazes, with eyes overlapping eyes. Some faces seem neutral, others tender, wary or wry. Still others are playfully, exaggeratedly aggressive, teeth bared in a snarl.

They are all Thomas, or versions of him. The paintings explore ideas and experiences of black masculine identity, he explained in a recent interview at the gallery. They hinge on the dislocations of being a Jamaican man living and working in the United States. And they draw from the social media “selfie,” a performance of self to others that conceals or distorts as much as it reveals.

“It’s a tricky thing, trying to articulate all this in paint,” he said.

A young artist a year out of graduate school, 27-year-old Thomas is currently a visiting assistant professor of visual arts at Antioch College. His Herndon Gallery show, titled “Schizomaica” and featuring 19 works in oil and charcoal, has been up since late February, and will be closing in another few weeks, on May 5. But before it closes, local residents will have a chance to see the artist at work. On Thursday, April 20, from 7 to 9 p.m., the Herndon Gallery is holding a reception and painting demonstration.

“I’ll be working on a painting in progress. I think,” he laughed.

Thomas’ process combines elements of performance, photography and painting. His first canvas is his own face, which he paints with dabs and streaks of color, then photographs. He edits and combines the photos, then paints from the resulting images, building up a textured, colorful canvas. He photographs the painting-in-progress, digitally manipulates the second set of images, and finally returns to finish the painting, adding new dimensions and details.

The total effect is dazzling and charismatic, according to Jennifer Wenker, the Herndon’s creative director. “The paintings are just beautiful. There’s so much texture and light,” she said.

Thomas seems to combine an intense dedication to art-making with a laid-back style. He came to art via math and science. In his native Jamaica, he was accepted into medical school at age 18, the norm for that country. But he switched tracks, and countries, ending up studying physics at Wesleyan College in Connecticut. Then he switched tracks again, “almost arbitrarily” picking art.

“I calculated that if I spent as much time painting as reading my physics textbooks, I could have a career in art,” he explained.

But art was also clearly in his heart, head, hands. He sold a painting for $1,000 at his senior thesis show — more than either of his parents had ever made in a month back home. “That helped convince them this wasn’t a bad idea,” he said. And he’s come to understand that being an artist is a deeply serious choice, one he likened to a marriage.

“You make a commitment based on incomplete information about a future you’ve deliberately neglected to look at carefully,” he said, noting that there are no guarantees, financial or otherwise, in the life of an artist.

Then again, as an artist he can look forward to the lifelong pleasure of creation, which depends on nothing but his own will and skill. “I can just dream up an idea and make it,” he said, a little wonderingly. Thomas sees craftsmanship as a missing element of the modern “knowledge economy,” where work products are mostly intangible, and jobs — as well as the identities that go with them — are easily lost.  By contrast, an artist’s work can never be taken away from him, and it always brings “tangible results and clarity,” he said.

Coming to the United States has given him plenty of fuel for his art. The experience has been positive in many ways — he’s found his vocation and a relationship with a woman he loves — yet also deeply dislocating. Being a black man in America is not at all like being a black man back home, he explained. The cultural connotations, the expectations and stereotypes of masculinity, the lived experience are all different.

“The same things that mean one thing in my home country mean something different here,” he noted.

Most fundamentally, Thomas never experienced his blackness as a disadvantage in Jamaica, yet feels expected to do so here. He recognizes that blackness can, and often does, disadvantage a person in America, yet he doesn’t internally experience his racial identity that way, he explained. Hence the “schizophrenia,” the fragmentation of identity into its social, cultural and personal components that his paintings portray.

“It’s a disjointed psychological experience, being many people at the same time,” he said.

Thomas recalled an incident at Wesleyan in which he was walking down a road and had toilet paper flung at him from a car window, presumably as a gesture against his race. His American friends were shocked, indignant. He was less so. For one thing, he said with a smile, he was on his way to buy toilet paper, so the hateful gesture was actually “kind of a gift from the universe.” And he couldn’t see, and still can’t see, why he was assumed to be the circumstance’s victim.

“Who is the victim in that situation? I still think it’s the guy [in the car] who can’t escape his worldview,” he reflected.

Thomas’ paintings also explore specific notions of masculinity that are celebrated and amplified in social media both here and in Jamaica. Chief among these is bravado, he said. But bravado is a mask, he believes, a way of performing the masculine self that expresses, limits and protects the inner self, sometimes all at once. The show’s most extreme explorations of this type of masculinity are two recent charcoal drawings, featuring hyper-masculine, grimacing faces.

“They’re wearing the mask,” he said. He hopes viewers get caught up in the fantasy of the images, even as they recognize them as fantasy.

At the other end of the spectrum is a painting called “Schizomaica 4: 4 Eyes,” in which Thomas fused his own and his girlfriend’s painted faces to create a haunting hybrid image.

“I was trying to mix up masculine and feminine so that you can’t see where one ended and one began,” he explained.

It’s his favorite work in the show, he added. And it points toward his next project, a series on femininity that reflects his upbringing in Jamaica surrounded by female relatives, female teachers, church ladies and others.

Another project in the works is a planned 50’ x 20’ mural at the Wellness Center. Thomas hopes to develop a concept for the mural that meets the college’s needs, and work with his students to execute the piece.

His year at Antioch comes to a close after the current quarter. Thomas would like to stay in America, through a tenure-track position at another college, or a change in visa status. There’s a visa category for “individuals of extraordinary ability” in the arts, sciences and other fields, he explained. He’s hoping to make his case.