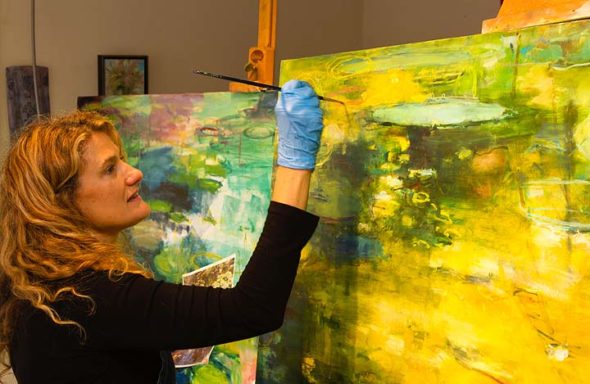 A solo show by local artist Jennifer Rosengarten is opening at the Springfield Museum of Art this Saturday, April 22, with a reception from 5:30 to 7 p.m. “Jennifer Rosengarten: Gardens & Ponds” will run through Jan. 7, 2018. Pictured here in her Dayton Street studio, the artist is increasingly well-known for her evocative paintings of the natural world. (Submitted photo by Bill Franz)

Inspired by her experiences in nature, the recent paintings of Yellow Springs-based artist Jennifer Rosengarten are filled with imagery from the outside world — the foliage of a flower garden, the floating lily pads in a backyard pond.

Yet, while observed life is present on the canvas, the work cannot be called representational. Nor is it truly abstract. Forms from the natural world reach out to the edges of her paintings and engulf the viewer in layers of color and form that pulsate with living energy.

Rosengarten, who works from her garage-turned-studio on Dayton Street, describes her process in part as a conversation “between representation and abstraction.”

Her pictures have been earning growing recognition and accolades. While commissions from individuals as well as businesses are keeping her busy, she also is showing her work in more high-profile settings, with the biggest show thus far set to open this weekend at Springfield Museum of Art. “Jennifer Rosengarten: Gardens & Ponds” will run April 22 through Jan. 7, 2018, in the museum’s special exhibition gallery. An opening reception will be 5:30–7 p.m. Saturday, April 22.

“I’m delighted and honored,” the artist said in a recent interview. “It’s definitely the most significant show of my career.”

The exhibition will feature a selection of oil paintings, several of which measure up to six-by-three feet, along with a collection of monotypes and drawings. Most pieces are recent, some dating back to 2015, others created within the last few months. All were made since her last big local exhibition in 2013 at the Dayton Visual Arts Center.

Ann Fortescue, the Springfield museum’s executive director, became familiar with Rosengarten’s work two years ago when one of the artist’s large paintings was included in the museum’s annual member’s show.

“I was mesmerized by her lithe representation of water and the soft yet vibrant colors,” Fortescue writes in the new show’s exhibition catalog. “A viewer can’t help but be drawn in both by the unexpectedly large size of the work, and a delicately captured vision of nature.”

The director alludes to the immersive experience of viewing Rosengarten’s paintings, an experience that Judith L. Huacuja, chair of the department of art and design at the University of Dayton, echoes in her catalog essay: “For the viewer, there is a sense of exuberance with nature. The paintings point to a sensuality of being in the world and being fully present to the ephemeral and fleeting changes of nature and life.”

The act of creating the work is immersive for Rosengarten as well. She said that she thinks her exploration of an all-encompassing experience is what led her into larger formats. “I like to have my peripheral vision filled, so I’m really in it,” she said. “It’s like stepping into a world when you’re working on a larger scale.”

With that two-dimensional framework, she creates an illusion of depth, with no single focal point. A dense layering of lines and forms move through each piece. “The work has its own logic,” she said. “There’s not a horizon line.”

While nature imagery is something she’s “been looking at” for the past 10 years, she said she has “always liked lots of stuff.” But no matter what she’s painting, her primary goal is to create — or re-create — “a sense of space and time, rather than depicting real things.”

“It comes from an emotional response, rather than an objective recording of something.”

As an undergraduate in Wright State University’s art department in the late 1980s, she was instructed in observational representation, giving her a firm foundation, she said, to go on to get a master’s in fine art from Boston University and explore her personal artistic vision. After Boston, she went to Providence, R.I., for a time and eventually met her husband, Chad Runyan, who like her had grown up in southwestern Ohio. They moved to Yellow Springs 17 years ago to raise their son, Jack, here.

Life here as an artist suits her, she said. “I never liked the New York scene.” The windows of her studio look out onto a backyard filled with growing things and alive with bees, frogs and birds. The nature all around feeds her soul and her art. “I love having my (studio) door open. I don’t know if it affects my imagery as much as my state of being,” she said.

What’s more, the Dayton area has “a vibrant artist community,” she added. The Dayton Art Institute is first-rate, and the Springfield Museum is lovely. “I really appreciate that (the) Springfield (museum) is very dedicated to celebrating regional talent.”

There is a network within which she has been able to learn and grow as an artist.

She is inspired also by literature, she said, particularly the work of Virginia Woolf. “If I could paint like she wrote …” Woolf creates “layers of ethereal space,” that resonate with Rosengarten.

In her artist statement for the Springfield exhibition, Rosengarten cites another writer, Anne Morrow Lindbergh, who wrote of “the eternal validity of all beautiful and fleeting things.”

Rosengarten writes: “That contradiction — between a single moment and the ever forward flow of time and its accumulated history — is what is truly engaging for me in the work. … To arrest the moment requires observation and contemplation — it is not a passive objective recording of events, but a search for truth filtered through the lens of individual experience.”