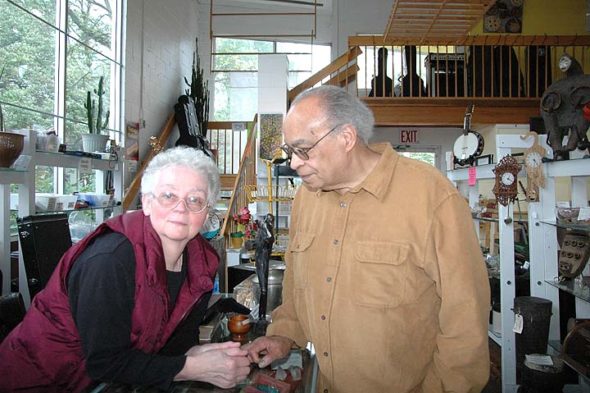 Gail Zimmerman and Mark Crockett have owned Rita Caz Jewelry Studio & Gallery since 1986. The couple is retiring, and their eclectic downtown store, selling everything from custom jewelry to African art to vintage guitars, will close its doors on May 20. (Photo by Audrey Hackett)

Rita Caz is closing. After more than 30 years in the jewelry business, owners Mark Crockett and Gail Zimmerman are retiring. Later this month, the eclectic downtown store that sells custom jewelry, gemstones and fossils, African art and artifacts, works by area artists and a smokin’ selection of mostly vintage guitars will shut its doors for good.

The store has been a way of life as much as a livelihood for its husband-and-wife owners, so the closure is bittersweet.

“A business is an entity or a life,” Zimmerman said in a recent interview. “Stopping doesn’t come easily.”

Yet the couple felt that it was time to retire. “We’re getting older, we’re moving slower,” Crockett explained. Asked if he was sad about the coming change, Crockett’s face broke into a smile.

A goldsmith and silversmith as well as a musician, Crockett will continue to make jewelry, and make music, from studio space in the couple’s High Street home. He’ll be joined occasionally by Rita Caz’s other longtime in-house jeweler, Mary Patterson of Dayton, who’s worked for the store for 30 years and plans to continue making jewelry with Crockett.

“Mark was my mentor,” Patterson said on Sunday, working for free to help the couple clear out the store.

Zimmerman is also a jeweler — a silversmith — and a painter. And both of the couple’s grown children, Justin and Sara Zimmerman-Crockett, who now live in the village with their families, are artistic in their own right. So the creative ferment that’s swirled around Rita Caz for decades will continue.

But the shop itself, a Yellow Springs icon, will be no more. (Nearby business House of AUM will be expanding into the space in June, according to owner Melissa Herzog in an email last week.) The couple didn’t consider selling the store, or passing it on to their kids, simply because the business is too singular to be carried on by other owners, too tied to Crockett’s particular talents as a skilled custom jeweler — a rarity in this part of Ohio — and a blues musician and guitar aficionado.

“The business is built around Mark,” Zimmerman said.

The couple met at Wright State in the 1970s. Both were art students, painters as well as jewelry-makers. They moved to Yellow Springs in 1972, and married and bought a house here several years later. Crockett apprenticed in jewelry-making locally and, for a time, in Arizona, then worked for 15 years at Cab-n-Facet, the Springfield jeweler.

But he found the hours didn’t support the kind of life he wanted as a father; he often arrived home after his young son was in bed.

“I discovered that most jobs don’t allow you to spend enough time with your family,” he said.

In 1986, the couple, with a third business partner, opened Rita Caz as a custom jewelry design and repair studio, with a mix of art and other items. It was initially located on Dayton Street, where Design Sleep is now. The name they selected was as idiosyncratic and personal as the rest of the business: “Caz” was an acronym of the three original owners’ last names, while “Rita” was a timeless name that just seemed to fit.

“We had this concept of making up a person we all thought we could work for,” Crockett explained, pointing to a print near the shop’s front door of a Victorian-era lady holding flowers.

The third partner left early on, and the couple moved the shop to Kings Yard, which became its longtime home. It was located for years where Tibet Bazaar is now housed, then in 2009 moved to the large, light-filled building next door, a onetime drive-through liquor store, according to Crockett.

In that bigger space, the business expanded. There was finally room — upstairs in the balcony area — for Crockett’s impressive guitar collection, augmented by banjos, ukuleles, amps and accessories. “A hobby that’s gotten out of control” is how he describes this aspect of the business. There was also space for guitar lessons. And jam sessions in the main part of the shop. The basement housed the studio where Crockett and Patterson designed and repaired jewelry, logging hours side by side at their individual jeweler’s stations. Jewelry-making classes were offered down there, too.

“It’s been a decent living — and a lot of fun,” Crockett said.

While Crockett’s life was centered on the store, Zimmerman held several “real jobs” over the years in addition to her management of Rita Caz, he noted. She worked as an art teacher for two area high schools, coming back to the store full-time in 2007 to handle operations and merchandising.

At the urging of his children, Crockett ran for Miami Township Trustee in 2001, a position he’s been re-elected to three times and still holds. And he’s been active locally as a musician, playing blues and, more recently, classic rock. His band, Mac and the Rockets, performs occasionally at the Emporium. While he used to play out-of-town gigs, at 68 he’s too old for that now, he said, sticking to what his wife calls “geezer gigs.”

Rita Caz has employed many villagers over the years, including Ona Harshaw, Kate Hudnall, Talitha Green and Palmer Jordan. The store was a hang-out place for local and visiting artists and musicians — and, for many after-school afternoons, the Zimmerman-Crockett kids.

“They could drop their packs and head out,” Crockett said. Being a shopowner in the Yellow Springs of the 1980s and ’90s was a good way to raise kids, he added, helping him fulfill his early hope to be a more involved dad.

And there’s another element of nostalgia, he said. When Crockett opened the store in 1986, he and Emmett Burks, who owned a black barbershop in town, talked about the decline in African-American businesses in Yellow Springs.

“He and I were the last of the black craftsman” in the village at that point, Crockett said. Now, with Burks’ shop long closed, and Rita Caz about to shut its doors, Crockett said it feels like the end of an era.

On a recent weekend, with closing just weeks away, trade at Rita Caz was brisk. Tourists wandered in, and longtime customers stopped by to chat and reminisce. A progressive sale that began in April is clearing out inventory at discount prices. The sale currently stands at 50 percent off most items, which will continue through May 20, the store’s final day.

“As you can see, it’s working,” Zimmerman said, waving her hand at partially empty jewelry cases and sparsely stocked shelves. There was a catch in her voice.

Crockett stood behind the counter, leaning against its glass top and flipping through the pages of a photo album that contained pictures of a few of the thousands of pieces he and Patterson have worked on over the years.

There was a gold cross made for an A.M.E. bishop in Cincinnati. A ring designed for children’s book author Virginia Hamilton, “simple and colorful” like her personality, Crockett said. A kite brooch created to match an image from a client’s dream. One-of-a-kind pieces commissioned after the death of clients’ parents, using cherished jewelry from a deceased parent to create something new. And custom wedding bands, too numerous and too diverse to count.

“Every piece has a story,” Crockett said. Making jewelry brings the jeweler into intimate contact with people’s lives. That’s been the pleasure and, occasionally, the challenge of the job, according to Crockett and Patterson.

“The people are what I’ll miss most,” Patterson said.

Crockett estimates that about a quarter of the store’s business has come from Yellow Springs, with the rest from Dayton, Cincinnati, Columbus and beyond. Sometimes far beyond, including Thailand and Japan, according to Patterson, who related with relish the range and depth of relationships the business has developed over the years.

“Mark is so caring about customers, and they sense that,” she said. “Customers come in from all over the world to say hi.”

The store is like family, Patterson added. “Mark and Gail are the kindest, most thoughtful, creative, generous and honest people I’ve ever worked for. That’s why I stayed 30 years,” she said.

Since the closure was announced, customers and friends have been stopping by the store to say good-bye and wish the owners well. “They say they’ll miss us,” Crockett said. He paused.

“I love being missed,” he said, smiling.