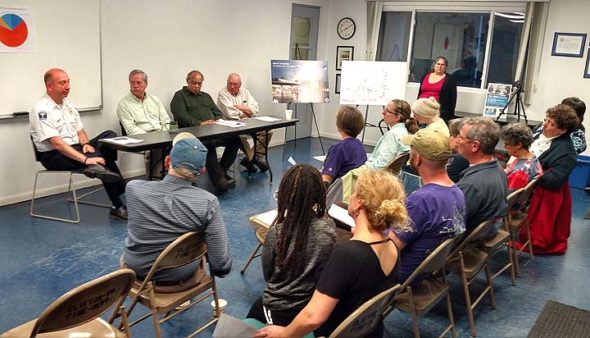 From left to right, Miami Township Fire and Rescue Chief Colin Altman and Miami Township trustees Chris Mucher, Mark Crockett and Lamar Spracklen made their case for a new fire station at a public forum last week. The station would be funded by a new levy on the ballot May 2. About 20 citizens attended the forum, weighing in with support as well as concerns about potential noise issues, cost and logistics. (photo by Dylan Taylor-Lehman)

On May 2, residents of Miami Township will vote on whether or not to pass a levy that would fund a new fire station for the Miami Township Fire Department. The MTFR maintains that its current station is outdated and too small for the size of the department, and so at a public meeting last week, the three Miami Township trustees and members of the fire department made their case for funding the new station. Approximately 20 members of the public gathered in the MTFR’s meeting room to hear how the new facility would affect and benefit the community. Citizens weighed in with their concerns about the potential noise, cost and logistics a new department would entail.
“We need a facility that meets the needs of both the Miami Township Fire Department and the people of Miami Township,” said MTFR Fire Chief Colin Altman.

In addition, according to Altman, the current station “lost its usefulness” more than 15 years ago. The current 7,000 square foot building was built in 1954 and added onto in the 1980s, he said, and was built for a department that didn’t have an EMT squad. The current building requires significant structural work, Altman said, as well as upkeep such as asbestos abatement and the installation of new fire suppression systems. Additionally, there are not separate bunk facilities for men and women.

“You know, the silly things that modern buildings have,” Altman quipped.

It makes financial sense to construct a building that will “still be useful 60–70 years in the future,” Altman said, and more specifically, it is important that the future building be able to accommodate the needs of a growing department and an aging population. Altman said the department has seen a 30 percent increase in calls over the last four years, a number he expects to increase based on the village’s aging population and the increasing amount of tourists.

“We want to keep costs [of the new building] as low as possible,” he said, “but we need to expand our building to two times what it is now.”

If the levy passes, the new station will be built at 1001 Xenia Avenue, on a piece of property on the south end of the village formerly owned by Wright State University, of which the Township purchased half in October 2016 for $350,000. The new station is projected to cost $5.75 million dollars, which would increase property taxes by around $84 per $100,000 of property value for the next 30 years.

According to Township Trustee Chris Mucher, the MTFR’s budget is $700,000 per year, a figure that Altman said made it impossible to build a new fire station without passing a levy that increases taxes. For Yellow Springs residents, 4.2 percent of property tax dollars go to Miami Township, according to figures provided by the Greene County Auditor; by comparison, 64.7 percent go to Yellow Springs schools, while 13.8 percent goes to Greene County. If the levy passes, construction will begin this winter, Altman said, with MTFR moving into the new facility “toward the end of 2018.”

Mucher noted that if the new station is built, the Township would sell MTFR’s former property, which will offset the cost of the new station. The MTFR’s current site hasn’t been appraised yet, he said, but the Township expects to get back what it paid for the new parcel of land.

An architectural drawing of the new facility prepared by MSA Architects of Cincinnati sat on an easel in front of the crowd, showing the hypothetical station’s new layout. The facility is modeled around maximizing the accessibility and space afforded by the parcel of land. The new building would include five “pass-through bays” for fire engines and a driveway that would allow engines to pull into the bays from the rear, instead of backing into the front (and only) entrances as they are obligated to do currently. In addition to the complicated parking, the size constraints of the current building prevent the department from purchasing bigger pieces of equipment, Altman said, such as a ladder truck, which would allow them to more easily reach people in distress on the third stories of buildings.

The firefighters also voiced concern about the ease with which exhaust fumes from the vehicles in the current garage permeate the rest of the facility. Visitors were able to tour the facility and were shown that the overnight rooms are located directly above the garage, and that most of the building’s doorways and hallways open to the garage. According to firefighter Alex Wendt, cancer rates among firefighters are significantly higher than average due to frequent exposure to diesel exhaust and the carcinogens released in burning buildings. The new station will feature living quarters away from the garages and will also have separate rooms to store gear, Wendt said, as gear retains harmful chemicals and elements following exposure to fire and diesel fumes.

Villagers’ concerns
According to a handout given out at the meeting, the new location “offers the fastest response time possible to the vast majority of emergencies in Miami Township.” However, Yellow Springs resident Bob Baldwin saw one drawback to the location, namely that it is one of the last unoccupied properties left in the town. Locating the fire station on the Xenia Avenue property might forestall new business opportunities in the village, he said, as there would be little land left available for a commercial entity to be built. For that reason, Baldwin suggested that the MTFR reduce the footprint of the new building to allow for other businesses that might also be able to make use of the space.

“I don’t think anybody in this room questions the need for a new fire station,” Baldwin said, but it is important that space is used “frugally.”

According to Mucher, the Township only bought the amount of land that was necessary for construction of the new facility, and while the land is currently zoned for residential construction, Village code allows for conditional use permits for civic buildings, such as a fire station. The Xenia Avenue tract owned by the Township is 1.9 acres, or around 83,000 square feet. The new fire station is projected to be around 17,600 square feet, not including the parking lot or landscaping. Trustee Mark Crockett said that the technical requirements of the new fire station necessitate its planned size.

In response to the drawing of the new station at last week’s meeting that showed plans for large bay doors and skylights on top of the building, villager Laura Curliss expressed concern that the light pollution might be disruptive to nearby residents. Other villagers’ worries included the effects that a fire station would have on property values, as it will be located in a primarily residential area, and the coming and going of emergency vehicles, which has the potential to disrupt more residents than the current station, which has fewer residential neighbors.

In response, Altman said that around 30 percent of MTFR’s ambulance calls are not emergency calls, which cuts down on noise pollution. Overall, he said, MTFR is “taking into consideration that [the station] would be built in a residential area.”

Bob Cooper, MTFR firefighter and chair of the department’s levy committee, said in an interview that he has been engaged in door-to-door campaigning for the new fire station and estimated that “98 percent” of the people he talked to were in favor of building it. Villager David Heckler stated that the new location would be quicker and safer, as there would be less emergency traffic through the center of town.

But several villagers were dismayed at what they characterized as a glut of levies on the horizon for area residents. The Yellow Springs School District will also have a levy on the May ballot, which will renew a funding levy already in place, and is aiming to have a levy that will fund the construction of new school buildings on the ballot in May 2018.

“It’s unfortunate that all of the levies coincide,” said villager Lisa Goldberg,“but we have to tackle one levy at a time.” The fire station is this year’s issue and should be passed or not on its own terms, she said, just as the question of new school building levy is something villagers will address on its own merits next year.

Yellow Springs Village Council member Gerry Simms said that the area has a tendency to push infrastructure repairs back until it is too late. It behooves the community not to let this happen to the fire station.

“It’s only going to get more expensive,” Simms said.