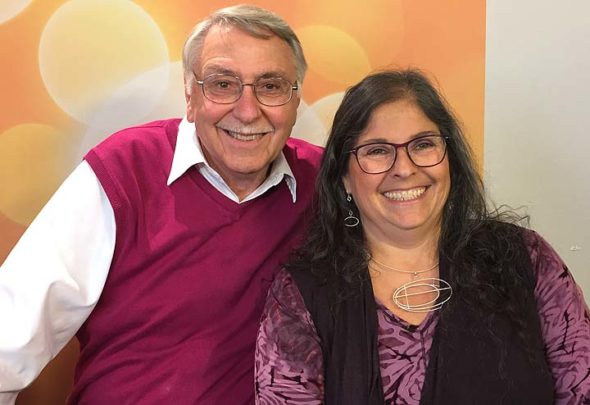 Local potters Bruce Grimes and Lisa Goldberg have been close friends and collaborators for 17 years. When Grimes lost his studio to a fire in April, Goldberg got to work organizing a silent auction and fundraiser to benefit the longtime potter and teacher. The event will be held Tuesday, June 13, from 5:30 to 8:30 p.m. at the Yellow Springs Brewery. (submitted Photo)

Local potter Bruce Grimes was awake and vigilant in the early morning hours of April 23, doing what he’s done hundreds of times: fire pots. About 200 pots were stacked inside his propane kiln, minutes away from being done.

Grimes had built the kiln himself 17 years before. He’s made many kilns in his 57 years as a potter, and this one was “just wonderfully consistent,” he said recently. But that night, looking up at the stack where the smoke exited his Clifton studio, he noticed sparks.

“I was seeing sparks where I shouldn’t have been seeing them,” he said.

The studio rafters were on fire.

Things happened fast after that. His son-in-law, Kirk Rowe, called the fire department. But the fire was quicker than the trucks. Within minutes, the studio had imploded. No one was hurt, but the studio was gone.
“Everything was destroyed. It was traumatic,” Grimes said.

The studio was located on the grounds of his daughter and son-in-law’s Clifton home, purchased by the family 17 years ago. Grimes and his wife, Joyce, lived in the home for a dozen years after moving to the area. Later they moved to Yellow Springs, and Grimes continued to use the studio, “a beautiful studio,” cherishing its proximity to his daughter’s family, including grandchildren Meredith and Forrest.

The April fire wiped out not just the studio structure, but all its contents — thousands of pounds of chemicals, glazes, wheels, a clay mixer, buckets, tables and more, as well as collected pieces of his own and other artists’ pottery. Above his workspace, Grimes had stored family albums and memorabilia, also gone to the fire.

It was a loss on many levels.

“Our biggest loss is not having our dad and grandpa out there every night,” said Christina Rowe, Grimes’ daughter. “We’re just used to that family connection.”

Grimes, 77, said he’s “always made pots,” and didn’t quite know which way to turn after the fire. But he knew he would stick with his lifelong work.

“People ask me what I’m going to do now,” he said. “I tell them, ‘I don’t know, but I’ll keep making pots.’”
The fire has revealed not just his determination, but an extraordinary wellspring of love, support and generosity among Grimes’ friends and fellow potters, in Yellow Springs and beyond. The outpouring has “so neutralized the sadness” of the loss, Christina Rowe said.

“An incredible amount of blessings has already come out of this,” Grimes agreed.

Three area organizations have offered him keys to their studios: John Bryan Community Pottery, where Grimes teaches classes; Cedarville University, where he taught as an adjunct for 11 years; and a new Springfield facility called Hatch Artist Studios. Grimes, who works in Springfield as development director at the Nehemiah Foundation, is currently using studio space at Hatch.

Some of his new pots will be sold by Wander and Wonder, a new Yellow Springs outdoors store set to open soon.

Offers of help have been small and large.

A group of local special-needs students, the Clay Dogs, who took a class this spring at John Bryan Community Pottery, gave a portion of the money they raised at the high school’s Exhibition Night to help Grimes.

And one local potter, Lisa Goldberg, has worked tirelessly for weeks to raise funds and materials to help Grimes rebuild. Goldberg and Grimes have been close friends and collaborators for 17 years. Grimes calls her “my fourth daughter,” and she recently said her fellow potter and kindred spirit is the “kindest and most generous man I’ve ever met.”

A former professional fundraiser known to many in Yellow Springs as the organizer of Art & Soul and the former Yellow Springs Artist Studio Tour, Goldberg sprang into action the day after the fire.

“I called him that day and I knew that I absolutely without doubt had to help make a small difference,” she said.

That “small difference” has snowballed. As Goldberg spread the word via social media of Grimes’ loss, offers of help poured in. She’s reached out to numerous individuals and organizations in the area, seeking donations of materials and funds. She set up an account for Grimes at Cornell Studio Supply in Dayton, the go-to supplier for many Yellow Springs potters. Cornell’s owner, Erin Lambers, happens to be a friend and former studio helper of Grimes’. People can donate to Grimes’ account, and all materials will be sold at cost to him, she explained.

“I would never make money off his loss,” she said, calling her former mentor “a very dear person.”
Goldberg’s biggest project since the fire has been to organize a silent auction and fundraiser. She’s gotten help from Grimes’ granddaughter, Meredith Rowe, a 2016 Yellow Springs High School graduate. The fundraiser will be held Tuesday, June 13, from 5:30 to 8:30 p.m. at the Yellow Springs Brewery. Co-owner Lisa Wolters is a potter and another friend of Grimes’, so the venue just seemed right, Goldberg said.

Dozens of area artists and businesses have donated hundreds of items for the silent auction, and some of Grimes’ own pieces will be included, having been donated back to the auction from private collections. The YS Brewery, which is donating the space for the event, will also donate $1 from every beer sold.

“This is just one way to help out,” Wolters said. “I’ve known Bruce for many years. He’s very near and dear to my heart.”

Goldberg is shouldering other costs associated with organizing the event, so all funds raised will go to Grimes.

She expects an overflow crowd, with people coming into Yellow Springs from around the country. An Illinois native, Grimes has lived and worked in Ohio, Wisconsin, Florida, Colorado and New Mexico. With decades as a potter and teacher, in addition to other professional roles, he has rich and varied connections with generations of colleagues and students, Goldberg said.

“His generous spirit and warmth is coming back to him,” she added.

Grimes’ voice broke a little when he spoke about all the friends, old and new, who have stepped forward after the fire.

Later he called this reporter back to make sure that last sentence hadn’t been buried under tears. He was calling from his donated studio space in the Hatch building. Hours after returning from a family trip out of state, he was back in the studio, making pots.

For more information, more ways to help and questions, contact Lisa Goldberg at lisa@ysarts.org or 767-7285.