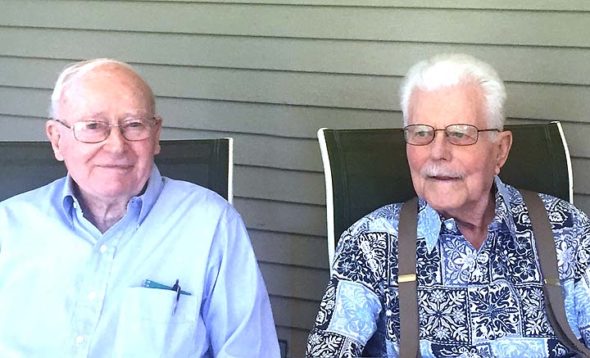 Longtime friends Sam Bachtell, left, and Wally Sikes were honored Thursday, June 8, during the Yellow Springs Board of Education meeting for their decades of individual volunteer service to the school district. Recipients of the second-annual Bulldog Backers Award, each man was recognized for contributions that included working with the district’s levy committees through the years. They are shown here at a recent lunch. (Submitted photo)

Dawn Boyer, the Yellow Springs School District’s director of advancement and community relations, reported on her first year in the position during the Board of Education’s regularly scheduled meeting Thursday, June 8.

“I feel like it’s been a great year,” she said as she shared a document listing recent fundraising-related activities and results with the board.

Among them were the convening of a nine-member development committee, which meets monthly; the formation of an alumni association, with social and fundraising events; and the launch of an annual campaign.

“It took some time to find my bearings,” she told the board of getting started in the newly created position, but after assessing the year, she feels good about the programs that were started and the development structures that were put in place.

In terms of contributions, Boyer listed $126,799 in money received or anticipated, with an additional $58,550 of in-kind donations, as of May 30. The contribution amounts, broken down by sources, are: $87,698 in grants, including “tentative approval” for an Ohio Department of Higher Education award of $73,999 to fund a two-year engineering internship program at the high school; $10,853 from the annual campaign; $8,419 from events; $8,500 in major/restricted gifts; $9,550 through the Deeper Learning Training Center for professional development; and $1,779 from the sale of Spirit Wear.

With a year’s groundwork in place, Boyer said she is “looking forward to this summer to be able to reflect and plan.” Some of that reflection and planning will involve ways of working with existing school-support groups, such as the theater association, boosters and PTOs, Boyer said, in response to Board President Aïda Merhemic noting the concurrent efforts of those groups. Merhemic cautioned against working at “cross-purposes,” and Boyer agreed, adding that as a newcomer to the district, she didn’t want “to step on the toes” of those with established roles.

In the works are additional alumni association events and an improved online and social media presence for the schools; also, the district is “in the process of writing several grants to fund robotics programming (Department of Defense STEM), outdoor education (Ohio EPA), makerspaces (Library Services and Technology), and individual projects (MHJ Foundation, DP&L),” according to Boyer’s printed document.

A YS High School alumna with a 14-year career in educational grant writing, Boyer marked her year anniversary with the local district at the beginning of this month. The primary responsibility of her job is to raise additional money for the district through a variety of outreach efforts. The goal, according to district literature, is to bring in about $150,000 per year, a little more than double her salary of $70,000.

Boyer’s report was part of a relatively light board agenda in which focus was given to highlighting some of the district’s accomplishments during the just ended 2016–17 school year.

Other recent accomplishments noted during the meeting included the awarding of the 2017 Impact Award, by the Little Miami River Kleeners and the Little Miami Watershed Network, to the seventh-grade “Into the Wild” PBL and the 10th-grade “Glen Helen Health Index” PBL.

In addition, McKinney Middle and YS High School Principal Timothy Krier noted new graduate Julian Roberts’ fourth-place finish in the 300 hurdles at the Girls Ohio High School Division III State Track Championships and rising senior James Browning’s 13th place showing in the high jump at the state championship meet. He also commended the McKinney School’s faculty for earning the Ohio Team of the Year award by the Ohio Middle Level Association, out of a field of some 1,039 middle schools, junior highs and upper elementary schools in the state.

Also honored at the meeting, with a retirement plaque presented by Principal Krier, was Keith Harding, who has retired from the custodial staff after 35 years of service to the district.

A high point of the meeting was the presentation of the annual Bulldog Backer Award, which was inaugurated last year. Superintendent Mario Basora said that the award honors people in the community who have been “really involved in supporting our schools over time.” This year’s honorees are Sam Bachtell and Wally Sikes. Bachtell was on hand to accept his award, and Sikes’ daughter, Linda Sikes, accepted the honor on her father’s behalf.

“Our secret weapons in our schools are our elders,” Basora said. “I hope to someday be at their level.”

Basora described Sikes as “very conscientious and caring … very interested and engaged, and super smart.” Basora noted that Sikes had served on levy committees for at least 30 years and that he was “one of the drivers” in establishing the Yellow Springs Educational Endowment through the Yellow Springs Foundation. The superintendent recalled that upon coming to Yellow Springs, “My predecessor said, ‘Wally’s a guy you’ve got to get to know.’”

Bachtell’s service to the district was as the treasurer of every levy committee for 40 years. “It was so wonderful to see someone who no longer had children in our schools” be so involved, Basora said. “This award is long overdue. It’s the minimum we could do for you for all of your work and dedication,” he said presenting the clear, pyramid-shaped award to Bachtell.

Board member Anne Erickson agreed. “I worked on a lot of those levy campaigns with Sam,” she said. “The most terrifying one I worked on was the one after you were no longer treasurer,” she told him. Joan Ackerman, who accompanied Bachtell, shared that in 1984, he helped establish the Mary Jane Bachtell Creative Writing Award in honor of his late wife. Having evolved over time into the Creative Writing Endowment Fund, it now helps support the middle school’s Power of the Pen program, she said.

• Board members started the meeting earlier than usual — 6:30 p.m., rather than the typical 7 p.m., by appointing member Steve Conn as treasurer pro tem, in the absence of District Treasurer Dawn Bennett, and then going into executive session to discuss “the purchase of property for public purposes or the sale of property at competitive bidding.” The three board members present — Conn, Erickson and Merhemic  — took no action when they returned to open session shortly after 7 p.m. Absent were Sean Creighton and Sylvia Ellison.

•Superintendent Basora said that the district website now has a web page for viewing the 62-page report made by the school facilities commission on the physical status of the district’s buildings, including estimated costs of repairs and upgrades.

The district also has scheduled three additional public meetings this summer to hear from community members about possible plans for the local schools. The first is 6:30 p.m. Thursday, June 15, in the high school gym. Glenn Rowell, of the Ohio Facilities Construction Commission, is scheduled to attend to answer questions about the buildings report. Subsequent summer meetings will be July 11 and Aug. 12.

•Board members tentatively scheduled a work session for 6 p.m. Thursday, June 22, in the John Graham board meeting room at Mills Lawn School.