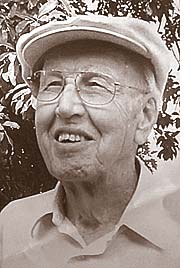 Lloyd Webster Kennedy died on Sunday, June 25, 2017, in his home, where he had lived since moving to Yellow Springs in 1938. Born Oct. 19, 1914, at the 1839 Kennedy ancestral home in Center Point, Clay County, Ind., Lloyd studied agriculture at Purdue, and at Ohio State, from which he received a master’s degree in 1937.

Lloyd’s first job was with Antioch College, where he became a successful manager of their hybrid seed corn company, a new science at the time. When Antioch eventually sold the company, Lloyd went to work for  the Ohio Department of Agriculture, where he spent the next 38 years supervising plant disease inspectors in the western half of Ohio. The work involved checking trees and plants for disease and insect infestation, determining which were labeled correctly and ready for sale, and involved much effort toward controlling the spread of exotic plant pests accidentally introduced to Ohio.

During these years Lloyd was the principal founder of two organizations: the ongoing Horticulture Inspection Society, a multi-state organization of inspectors having specific work in common, and the Southwestern Ohio Environmental Horticulture Association, a 25-county organization for people in the “green” industry, for those growing, selling or teaching about commercial plants and associated material. In appreciation for all he had done for the organization, Lloyd and his first wife, Mary, were given a 10-day trip to Hawaii.

Before and after retirement, Lloyd assisted with downtown Yellow Springs tree planting. In October, 1976, he agreed to join a group guiding an urban forest restoration project at Mills Lawn. The group, which continued that project by adding trees to Mills Lawn in following years, saw the need for more tree planting in the village. They organized the Yellow Springs Tree Committee in spring of 1982, and Lloyd was the first chairman, serving four-and-a-half years, followed by other Tree Committee offices and jobs, including project coordinator, treasurer and producing and editing the newsletter. The various jobs making the work interesting as well as a challenge, Lloyd said he could never have found a more rewarding volunteer retirement activity. He has been honored several times by local organizations and by the Village for his work with the Tree Committee, including having the Arboretum, recently enlarged to include all of Ellis Park, named in his honor. He especially appreciated the great help and support of the people of the Yellow Springs community. They have contributed generous support continuously to keep the Committee progressing, thus inspiring the work of so many great Tree Committee members and helpers.

In 1949 Lloyd married Mary Winifred Clawson of Columbus. Mary was his constant supportive companion for 53½ years until her death in 2003. They were then beyond 50-year members of the First Presbyterian Church where they regularly took part in church work and activities.

After living alone for over three years, in 2006 Lloyd married family friend, Faye Hyunja Choo, born in Korea, who lived and worked in Chicago for many years. Lloyd greatly appreciated Faye’s unique support, comfort and companionship in his later years, and many times proclaimed how her very special care had prolonged his life, and how he felt so fortunate she was willing to be with him.

In addition to Mary, Lloyd was preceded in death by his parents, Herman C. and Evelyn Jenkins Kennedy and by two brothers, Horace at age 11, and Dr. Theodore R. Kennedy. Lloyd is survived by Faye and by his son Todd and wife Dr. Rebecca Andre in Delray Beach, Fla.; and by two nieces, Ann Kennedy in Oxford, Mich. and Gail Iverstine and her husband, Col. Emile Iverstine, in Niceville, Fla.