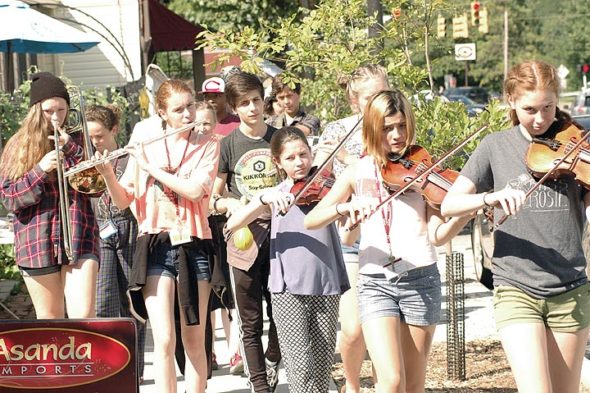 The annual concert by staffers and campers of the Friends Music Camp takes place Saturday, July 29, at 7:30 p.m. at the Foundry Theater on the Antioch College campus. Shown above, campers from the 2016 camp marched through downtown Yellow Springs before the concert.

The annual concert performance by staff and campers of Friends Music Camp will take place this Saturday, July 29, at 7:30 p.m. at the Foundry Theater on the Antioch College campus. The event is a fundraiser for Glen Helen, and last year’s performance raised over $2,000 for the nature preserve.

Featured in the concert will be several Yellow Springs performers, including Rourke (Rory) Papania, an FMC staffer who will perform several original songs. Also on the bill will be vocalist Julia Hoff and Eleanor Buehrig, who will sing and play the ukelele. The event also includes a performance of Blue Oyster Cult’s “Godzilla” by the FMC band and orchestra.

The camp, founded by Yellow Springs musicians Peg Champney and Jean Putnam, now is located on the Earlham College campus in Richmond, IN, after many years at the Olney Friends School in Barnesville. Young musicians from Yellow Springs and the area are always well represented, along with staff members, including longtime staffer Martha Hyde, a professional musician from New York City who was raised in Yellow Springs.

Tickets for the event, which can be purchased at the door, are $10 for adults and &6 for students.