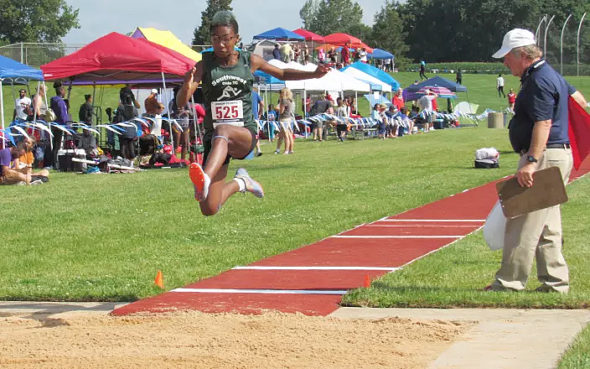 What do you do if in preschool you were winning all the footraces by running backwards while everyone else sprinted? If you’re 13-year-old Malaya Booth, you qualify for the 2017 National Junior Olympics Track and Field Championship sponsored by USA Track in Field.

Getting to this high level has been a whirlwind process, one that is a testimony to the Southwest Ohio Track Club for which Malaya runs. By her second year, her first running for McKinney Middle School, she and her relay team broke two school records in the 200- and 400-meter relay races. Yellow Springs schools have a long tradition of track excellence, stretching over many decades, so breaking records is significant. This is also a community that knows how to spot track talent.

“I always liked to run around the playground,” Malaya said. As her fifth grade year was winding up in 2014, older students began to apply the pressure. “They’d come up to me and say, ‘If I don’t see you in track next year, I’m going to hunt you down.’”

The summer she began training, she did both track and the Yellow Springs Kids Playhouse (YSKP). This required her to go from her house, to the campus of Antioch University Midwest for rehearsal, and then to the track for practice at the high school.

“I had this really small bike my mom called ‘Pinky,’ and I rode it all over.” She quickly gravitated toward the 100- and 200-meter dash, as well as the long jump. For Malaya, the fact that she is not a distance runner made it relatively easy to select these specialties. “In the first year, we got to decide. In seventh grade, the coaches decided but luckily what I’m good at is what I also like to do.”

The 2017 National Junior Olympics are held July 24-30 in Lawrence, Kansas. She and her father, artist and musician John Booth, are making the ten-hour drive on July 26, with her first competition on the 27. Malaya has qualified for the 100-meter race and the long jump.

Along with the excitement the whole family feels, though, is consideration of the financial realities. The qualifying race left Maria Booth, Malaya’s mother, little time to secure lodging for reasonable prices. The 365 Project with resident Kevin McGruder quickly put together an indiegogo  campaign to raise $1,500. “I didn’t want people to think we were raising money for something like potato salad,” Maria Booth said. “So there is an itemized budget.”

Malaya admits to being both nervous and excited, but less the former and more the latter. When asked about what she was most enthusiastic, she responded, “I’m excited to learn new things.” When she added, “I’m not expecting to win,” her mother interjected, “you’re not?” Malaya laughed and said, “Of course I’m going to try to win, but these are the best of the best in the country. I’ll do my best and we’ll see what happens.”

There will be no screens on the trip, nothing new for the Booth family, which is fine with Malaya. This will be her first ever road trip. An avid reader, she plans to bring lots of books and is excited to see the country. “I guess Kansas is all fields, but I’ll still be looking.” How many races she runs will depend on how she does. Given that her pre-race ritual is to talk to her competitors and “make new friends,” she is also anticipating meeting new people.

For those who might think that Malaya is not taking the competition seriously, the quote her father tells her before each race says it all.

“He says, ‘Once the race starts the only thing they are allowed to see is my back.’”

To learn more or to contribute to the fund, please visit https://www.generosity.com/sports-fundraising/help-malaya-compete-in-the-2017-junior-olympics. Non-online donations may be sent to: The 365 Project, P.O. Box 165, YSO. Please make checks out to The 365 Project, and write on the memo line “for Malaya Booth.”