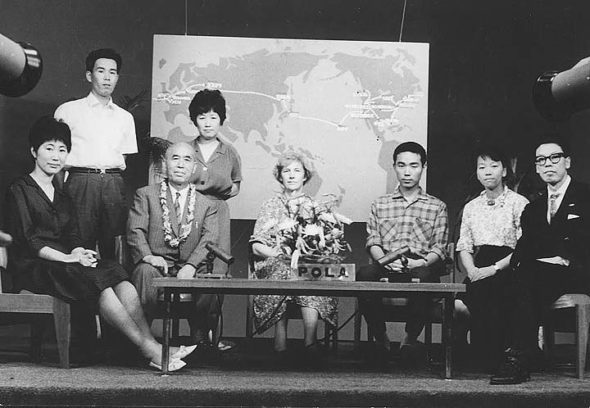 Former Yellow Springs resident and peace activist Barbara Reynolds is shown here in 1964 with some of the 24 survivors of the bombing of Hiroshima and Nagasaki who traveled with her in the World Peace Study Mission, aimed at educating nations about the dangers of the atomic bomb. The Peace Resource Center at Wilmington College is, with the help of a recent grant, beginning a project to digitally archive relevant documents to help educators more effectively research the effects of weapons of mass destruction. (Submitted photo)

It was a common sight in post-war Japan: a physically disfigured person, or maybe someone with an obvious genetic anomaly, getting yanked off the street by a doctor or scientist. Most people didn’t bat an eye; victims of the Nagasaki and Hiroshima bombings were at the fringes of society anyway, reminders of a lost war and a walking threat to the gene pool. So when they disappeared into buildings to be poked and prodded and studied, there wasn’t anybody to raise a fuss.

This story and other details about the 1945 bombings that ended World War II are part of what local resident Tanya Maus is trying to preserve. Director of the Peace Resource Center at Wilmington College, Maus heads a team of experts and scholars who are starting a project that combines cutting-edge digital mapping technology with good, old-fashioned historical research. They were recently awarded a $15,000 grant from the Ohio Humanities Media Council that Maus hopes will help high school educators develop curricula that include accurate, informed discussions of nuclear war.

“The premise is that creating, developing and sustaining such exhibits will allow archives to reach and foster new communities of users,” she wrote in an email.

On July 17 and 18, the PRC will host “Building 21st Century Digital Communities: Using Digital Mapping to Develop Innovative Online Exhibits.” Led by Ph.D. students studying with the foremost expert at Tokyo Metropolitan University, this workshop is aimed at high school teachers. Maus says that participants “will leave the workshop with foundational knowledge in how to use the digital mapping system” being employed in the project. There are still spaces available. Readers can follow the World Peace Study Mission project at http://www.facebook.com/World-Peace-Study-Mission-1919136945021379, or on Twitter (@WPSMission) and Instagram (@worldpeacestudymission).

One of the scientists who was part of pulling bombing victims off the street was Earle Reynolds, who prior to the war had been chair of the Fels Institute in Yellow Springs. The U.S. government wanted to be certain that any information that could be gleaned from scrutinizing survivors stayed firmly in American hands. The Cold War was ramping up, and weapons developers were keen to understand the longitudinal impact of bombs. From 1951–54, Reynolds worked for the Atomic Energy Commission and studied children in Hiroshima, meticulously marking down the most intimate details of their bodies and emotional lives.

At first, Reynolds was comfortable with what he was doing, according to Maus.

“Earle was unable to question authority (along with many Americans at the time) because of how all-encompassing the justification for using the atomic bomb had become in just a short time,” she said in a recent interview.

Things changed when former First Lady and then United States Ambassador to the United Nations Eleanor Roosevelt visited Hiroshima and was appalled by the treatment of bombing survivors. Now questioning his work, Reynolds then decided that he wanted to sail around the world.

“Not so fast,” said his wife, Barbara, who demanded that he take her and two of their three children on the adventure, Maus joked. Two Japanese sailors rounded out the crew, and thus began the three-year journey of the Phoenix of Hiroshima, a trip that changed the course of the Reynolds’ lives and of the antinuclear movement.

Sitting amidst the thousands of artifacts and materials housed in the Peace Resource Center, which Barbara founded a decade after the trip, it is hard to believe that their ocean crossing did not begin as activism. They pulled into port as tourists, Maus explained, but again and again conversations with locals turned to the use of the atomic bombs. Worldwide opinion was largely one of horror. By the time they finished the trip in 1958, Earle and Barbara both were committed to bringing awareness about the devastation wrought by atomic weapons.

While it’s sometimes overly dramatic to say that in one instant everything changed, in this case it is true. Sailing into port in Hawaii, Maus said, Earle and Barbara Reynolds were faced with a decision: A group of activists piloting the craft Golden Rule had been arrested for navigating into nuclear test sites in the Pacific Ocean.

“The Reynolds decided to take up the charge. Earle was arrested for steering his boat into a testing area in the Marshall Islands. He remained on house arrest for two years before the charges were finally dropped,” she said. By 1962, the two divorced, but continued their activism.

Earle went on to sail the Phoenix of Hiroshima to North Vietnam in 1968, becoming a kind of public intellectual in regard to peace activism. His scientific career was ruined by his turn to anti-nuclear activism and he became a professor of peace studies at the University of California at Santa Cruz, according to Maus.

But it is Barbara’s subsequent work that Maus is using as the focus of the current project.

“In 1964, she led 24 bombing survivors and 14 interpreters who sailed to four of the five nations then armed with nuclear weapons: France, the United Kingdom, the United States, and the former Soviet Union,” Maus said. The fifth nation, China, acquired capability that same year but the team was unable to coordinate a visit.

The aim of the trips, which collectively became known as the World Peace Study Mission, was to encourage power brokers and average people alike to understand the devastating impact created by weapons of mass destruction. In 1965, Barbara opened up the World Friendship Center in Hiroshima, which was then the only location dedicated to providing survivors a place to connect, tell their stories, receive treatment, and find loving community within a larger culture that regarded their existences as either threats or a reminder of a lost war. Barbara brought international attention to the plight of the survivors, and to herself.

There came a time when Japanese activists wanted to represent themselves and their own experiences. “I think her decision to return to the U.S. shows that she respected that changing nature of the peace movement in Japan,” Maus elaborated. “I don’t have the sense that she was seeking self-glorification. She was certainly criticized for that at times, however.”

Once back in the United States, Barbara landed at Wilmington College, which offered her both a home and space for her papers, photos, films, maps, artifacts, and personal accounts. The Peace Resource Center, as it came to be called, continues to be a place where people from around the world come to utilize the immense collection. It also brings together an eclectic group of scholars. Antioch faculty member Brooke Bryan is assisting on the project with digital humanities expertise, and Antioch student Ciana Ayenu serves as an intern. There are participants from half a dozen institutions.

This is more than a professional project for Maus. “I always felt deeply disturbed when I saw someone stronger try to dominate someone weaker. Who gives anyone the right to oppress another person or people?” she asked while explaining her connection to Barbara Reynolds, who spent years metaphorically asking the same questions around nuclear weapons.