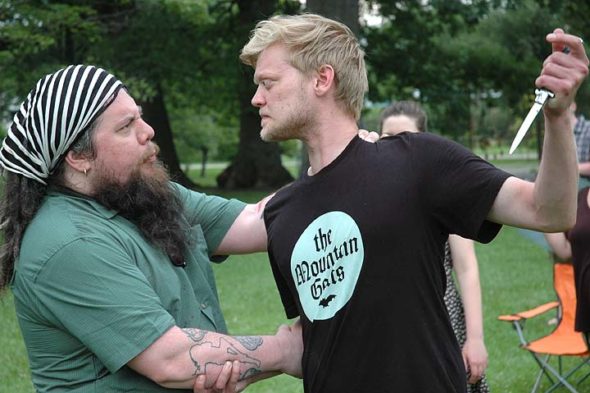 Aaron Saari (left), in the title role of Julius Caesar, and Jared Mola, as Brutus, rehearse the moment Caesar learns of his trusted comrade’s ultimate betrayal, in preparation for Yellow Springs Theater Company’s presentation of Shakespeare’s political tragedy, July 14–15 and 21–22, under the stars on the grounds behind Mills Lawn School. (Photo by Carol Simmons)

One of Shakespeare’s most familiar lines is ringing out from the center of town this month as the Yellow Springs Theater Company prepares to present the Bard’s tragic political drama “Julius Caesar” over two weekends under the stars on the grounds of Mills Lawn School.

Inspired by the renowned Antioch Shakespeare festivals of the 1950s, the performances will be presented Fridays and Saturdays, July 14–15 and 21–22, with live music by the Corndrinkers starting at 7 p.m. and the play’s opening group of Roman commoners making their entrance at 8.

The three-year-old YS Theater Company added an outdoor summer Shakespeare offering to its calendar last year with a production of “Much Ado about Nothing,” presented on the Antioch College campus with the iconic main building as a backdrop. The move to Mills Lawn this summer was prompted by a scheduling conflict with college reunion activities, said Lorrie Sparrow-Knapp, who is directing this year’s production.

While wistful for the artistic resonance of Antioch’s theatrical history, Sparrow-Knapp said she is finding relevance in locating the play, with its messages about governance and citizenship, in the heart of the village.

To emphasize those messages even more, the tragedy will be presented “in the round,” where the audience surrounds the staging area at the center. Actors make their entrances and exits through the crowd, which increases the drama’s immediacy.

“Everybody’s got a piece of it,” Sparrow-Knapp said. The cautionary lesson is that all citizens share responsibility; all are complicit in their political fate. “What people choose to keep in the center is a key element of Caesar.”

Shakespeare’s play is 400 years old, and the events depicted in it occurred nearly 2,000 years ago. Yet, its examination of leadership, power and public favor seem to have particular relevancy in our contemporary political climate. “It is in the ethos,” Sparrow-Knapp said, noting that a number of theater groups across the country have chosen to perform “Julius Caesar” in recent months. The most noted, and controversial, was the New York City Public Theater’s Shakespeare in the Park production last month that dressed Caesar in a Donald Trump-like wig and suit. Portraying Caesar as a current political figure — including former President Obama — has a long history, yet the Public’s new production elicited complaints and threats not only against it, but also other Shakespeare companies in other cities and states that weren’t even mounting a Julius Caesar.

The Yellow Springs production has not received any such attention thus far, said Sparrow-Knapp, adding that complainants do not know the play or the history that inspired it.

“It does not glorify assassination,” she said, referring to a particular point of contention in this summer’s controversy. The assassination of Caesar is not  depicted as a positive thing — it’s bloody and horrific — and it opens the door to the end of the Roman Republic.

At the same time, Sparrow Knapp said that the Yellow Springs production, which is set in contemporary times, reveals political parallels between the Roman republic’s demise and the United States in the 21st century.

“Are we making a political statement with this play? Yes, we are,” she said. “We believe it needs to be made.”

“We have a lot in common with Rome,” she said. Rome only lasted 250 years as a republic, and we’re coming up on 250 years. Is there a life cycle for a republic? What happened in Rome? In Rome, the senators fell out of touch with the people -— in fact they looked down on the people.”

The Roman leaders of Caesar’s time had an imperialist mind-set, which she said can be observed in our own politicians. Shakespeare’s play asks the vital question: “When do our leaders cross the line of serving us to serving themselves?” she asked. And then, as importantly, “How do we react?”

While the lessons are important, Sparrow-Knapp said she did not recommend the Yellow Springs production for children younger than 12, as elements — particularly the assassination in which Caesar is stabbed multiple times — are frightening and gruesome.

Sparrow-Knapp is drawing from a large cast of 25 people to pull off the local production. “There are some phenomenal performers,” she said.

Aaron Saari, the pastor at First Presbyterian Church and a part-time reporter for the Yellow Springs News, is Caesar.

“I’ve been acting since I was a child, and I have played some pretty powerful characters before,” he said. “But Caesar. How do you play such a transformational, enigmatic figure? I have to somehow portray this strong, charismatic character that many people do love, but they also fear him.”

He said he is also affected by the underlying lessons of the play. “This deals with the question of do people really know what they want. Because sometimes when they get it, it’s disastrous.”

YS Theater Company regular Kayla Graham is serving as fight choreographer and performing in the pivotal role of Caius Cassius, one of the conspirators who kills Caesar.

“It’s been a huge undertaking,” she said of the production. “But because it’s so exciting, it doesn’t feel overwhelming.”

While the play is a remarkable piece of theater, the YS production is finding another layer of importance, she said. “This is the first time in a long time that I felt like I was doing a necessary piece of theater.”

She also appreciates that she is playing Cassius as a woman in a male-dominated world. Sparrow-Knapp described the production as “gender-bending” in its casting of several women in traditionally male roles.

Among them also is Miriam Eckenrode Saari, who plays Casca, the first to stab Caesar. Costumed in Bela Abzug-like attire, including hat, she uses a hat pin to land her blow.

In addition to bloody, the production will be noisy, Sparrow-Knapp said, adding that she has had some conversations with Police Chief Brian Carlson about the production’s use of explosive eruptions, smoke and fake weaponry on the elementary school grounds.

“We hope we have a packed lawn,” she said. While admission is free, company members will be passing the hat for donations. Half of the till will go to a new Community Foundation fund for the establishment of a new local performing arts space.

“We need a dedicated performing arts space” that’s not attached to a school, she said. “We really feel it’s important to the community.”

“But if you want to come and see free Shakespeare, you can do that too,” she added. Patrons are welcome to bring lawn chairs, but not alcohol, which isn’t permitted on school grounds.

“We think that people will be so galvanized they’ll want to go out afterward to get a drink and talk about it,” she said.

“It will have lots of blood, lots of politics and lots of music. And some really, really good words we can learn from.”

“I think people are going to be transported,” Saari said.

It’s an important work with important lessons, Sparrow-Knapp said. “That’s why we keep coming back to this play.”