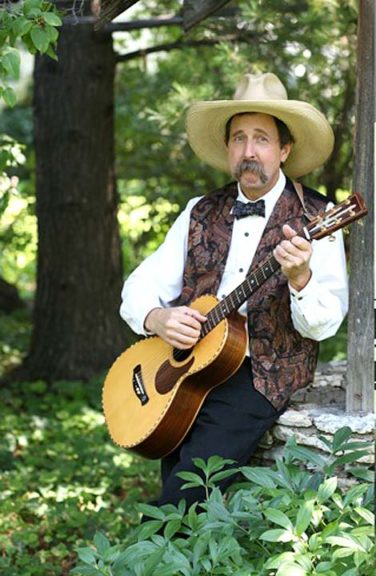 Folk music performer and Yellow Springs native Pop Wagner returns home next week for a concert with The Corndrinkers, a regionally based oldtime stringband, Thursday, July 20, at Little Art Theatre. Tickets for the 7 p.m. show are $15, available at the theater. (Submitted photo by Dale Hanson)

Musician and storyteller Pop Wagner makes no claim to being an actual cowboy, though he certainly looks the part, with his thick mustache, wide-brimmed hat and Western attire. Not to mention his fancy lariat work and extensive repertoire of cowboy stories and songs.

The Yellow Springs native, who has made his career since 1970 as a professional performer, is first and foremost a folk musician. He says he came to the cowboy genre through the folk songs of Woody Guthrie and Cisco Houston and the calypso albums his parents, the late Paul and Betty Wagner, had in their eclectic record collection.

A member of the 1967 graduating class at YSHS, Wagner is preparing to return to his hometown next weekend for his 50th class reunion, and while he’s here, he’ll perform a concert with the regionally based Corndrinkers, a five-member old-time stringband, on Thursday, July 20, at the Little Art Theatre.

The 7 p.m. show is a reunion for Wagner and the Corndrinkers as well, he said recently by phone from his home of nearly 50 years in the Twin Cities area of Minnesota. He said he’s known the Corndrinkers since shortly after they formed in the early 1970s, and he joined them in some of their early weekend contra dance performances at Carriage Hill Farm, in nearby Huber Heights.

Because of the size of the Little Art’s stage, Wagner said he didn’t plan to include his rope tricks in this appearance, but the performance will be filled with songs, stories and poems. He said he’ll start things off with a solo set; then, after an intermission, the Corndrinkers will take the stage before he eventually joins them and they close out the evening together.

The Corndrinkers feature fiddler Barb Kuhns; fiddler; multi-instrumentalist and vocalist Linda Scutt; guitarist and dobro player Doug Smith; clawhammer banjo player Tom Duffee; and Al Trumbull on the upright bass. The group specializes in “the fiddle tunes, heart songs and parlour music of the Southern mountain stringbands from … the 1920 and ‘30s,” according to its biography.

“It will be some great music, that’s for sure,” Wagner said.

Wagner said he got his first guitar as a gift when he was 14 years old. A year later, when his parents saw the love and affinity he had for playing, they bought him a better instrument, which he still has. He eventually added the fiddle, harmonica and “shingo,” a hand-made guitar-like instrument.

His road toward devoting his life to music-making was fostered further when in his freshman year of college in Ashland, Wisc., he lived off campus with three other young folk musicians. In the spring of that first year, the tumultuous 1968, he and his buddies organized a folk music festival. As a humorous note, they called it “the first annual” festival. “You know, I just played the 50th annual Ashland Folk Festival,” he said with a chuckle. The event has continued every year, still under student leadership, he said.

Those first few festivals during his own student years also brought him in contact with performers who became mentors and friends.

“I met Utah Phillips at one of those,” he said. Known as “The Golden Voice of the Great Southwest,” Phillips helped Wagner and his brother, Bodie, who also has pursued a musical career, get playing opportunities at the 1974 World’s Fair in Spokane, Wash., and the 1976 Smithsonian Folk Festival in Washington, D.C.

In the meantime, Wagner had decided to make Minnesota his home base. The location proved fruitful in bringing him in contact with Garrison Keillor in the early years of the entertainer and writer’s program, “A Prairie Home Companion.” Wagner performed frequently with Keillor before the popular show went national, but less so after it got bigger. He also appeared in the Robert Altman movie that was based on the program.

It was backstage at “A Prairie Home Companion” that he learned how to use a lariat. He said cowboy entertainer Glenn Orhlin, a National Heritage Fellow, gave him and folk musician Sean Blackburn their first lessons in trick roping there.

Over the years, Wagner has traveled to 44 states and 11 foreign countries playing traditional and some original cowboy songs, with a blend of country blues, oldtime and Cajun in the mix.

“It struck a chord with me,” he said of the cowboy repertoire. “I never got tired of it. I always loved the music and the scene that surrounds it and the people you meet.”

Being a folk musician supports “a simple approach to life,” he said, adding that he appreciates “the idea that people can make this music themselves with instruments you don’t have to plug in.”

“Old-time music has a floating repertoire,” in that many songs are widely known, he noted. “You can sit down with people you never met before and play. It’s a great way to share time together.”

Tickets for the July 20 performance are available through the Little Art Theatre’s website, http://www.littleart.com. Cost is $15. For more information, call the theater at 767-7671.