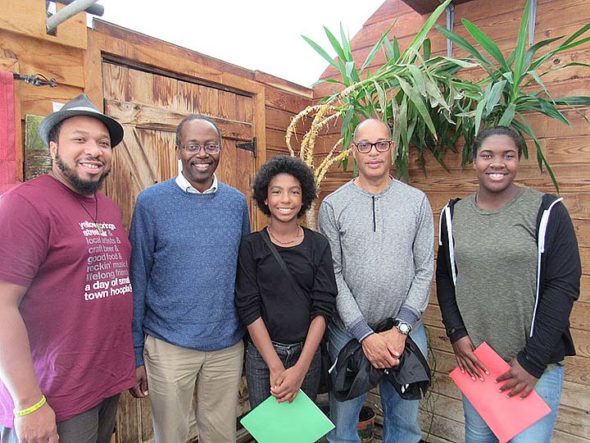 John Gudgel has had family in Yellow Springs since the 1890s; Kevin McGruder came to the village via Antioch College only five years ago. Together, these two historians are trying to preserve some vital local history that is in danger of being lost. They are leading an effort to compile an encyclopedia called “Blacks in Yellow Springs,” an ongoing, collaborative project tentatively scheduled for publication next year.

The stories have a distinctly Yellow Springs flavor. One involves the Gegner Barbershop protests of 1964, focused on desegregating a downtown Yellow Springs barbershop. When county police employed fire hoses and tear gas to disperse people or corral them in a paddy wagon, Yellow Springs resident Isabel Newman snuck up and opened the back door so that the people who went into the wagon could come right back out. And they did just that.

“I heard it when I first came to town and was like, ‘Okay, that’s funny,’” McGruder said. “But then I got to know Isabel Newman and realized, ‘Yes, of course she did that!’”

The next “Blacks in Yellow Springs” tour is Saturday, July 22, at 1 pm. Tours meet at the Mills Parks Hotel; tickets are $5. For more information, go to the365projectys.org.

For Gudgel, the project is necessary so that a new generation of teachers and local historians will be inspired.

“If there isn’t a vehicle to preserve this rich history, it will be lost,” he said.

It seems fortuitous that Gudgel and McGruder have met at this point in their professional lives. Gudgel has dedicated his career to primary and secondary education in Yellow Springs, but in his heart he is a historian. Some of the people he now collaborates with, including this reporter, studied history under him in middle school. McGruder, whose undergraduate and graduate training are in economics and real estate, didn’t turn to history until he was in his forties, when he earned a doctorate in the field. And while new to Yellow Springs, he is a major force in preserving village history.

“He has become essential to this town,” Gudgel said.

The “Blacks in Yellow Springs” encyclopedia project is a recent development with a long history. It began as a pamphlet of the same name that Jahwara Giddings, then of Antioch College and now a professor at Central State University, fashioned in 2006. The pamphlet related facts and anecdotes about local black history. Various groups kept the brochure alive with plans to update it, which happened in 2014 through a collaboration between The 365 Project, which aims to celebrate black culture year-round, and the Village Chamber. The chamber paid to have the updated brochure printed, and kept it in steady supply within the train station along the bike path. By 2015, Gudgel and McGruder felt that there was a need to bring the history alive, and in collaboration with other villagers devised a series of walking tours led by local youth trained as guides. Malaya Booth, then in sixth grade, was a member of the first cohort.

“I think it is important that children know the whole story about how Yellow Springs came about; it wasn’t just the Mills family who helped build this village,” Booth said.

Booth smiled when talking about one of those prominent figures, Wheeling Gaunt.

“He was influential, kind of like our village grandfather,” she said, laughing. “I didn’t know anything about him. I thought it was William Gaunt, but it is really Wheeling. He is kind of mysterious; I mean, we don’t know how he made all of this money!”

A hope that is shared by McGruder, Gudgel, and the other members of the committee — Isabel Newman, Phyllis Jackson, William Simpson, Joe Lewis and Karen McKee — is that subsequent generations of African Americans will learn, and pass on, this important history. They also hope white residents will find it equally important. McGruder pointed out that life in Yellow Springs has been profoundly shaped by black villagers.

“Leadership positions were often filled by black citizens: police chief, school principals, senior positions at Vernay, Antioch Bookplate and Morris Bean,” he said. Even in cities with higher statistical black populations, there were few examples of black leadership in public and private enterprise, he explained.

“Paul Graham was head of research at Vernay. Nan Harshaw was a senior administrative assistant at YSI. That’s unusual, nationally.”

Gudgel said that the history of blacks in Yellow Springs is more complicated than one might anticipate. For example, full integration in Yellow Springs was not easy and required a great deal of planning and commitment.

“There’s two important generations of blacks in Yellow Springs when it comes to desegregation,” he said. “Those who descended from the blacks who arrived in the 1860s, and those who came in the 1950s and settled in areas like Omar Circle. It was this infusion of blacks that came together with multigenerational black residents to do something about segregation in the village.”

This combination seems to be at play once again, with longtime resident Gudgel and transplant McGruder. Both are proud that, while there is a general tour called “Blacks in Yellow Springs,” there are also tours on “Black Residential Areas, “Black Businesses” and “Blacks in Faith Communities.” Many locations visited include brief talks or stories from villagers who are connected with a particular aspect of local history.

The encyclopedia, according to McGruder, “is the logical next step” and is already under construction. Anyone can contribute to the project; contact the organizers for details. Gudgel noted that the response so far has been overwhelming, with over 40 submissions. The second round of submissions recently closed, but McGruder said that there will be a third round in late-September. When published, the encyclopedia will be available in digital form, which may appeal more to younger users. McGruder is determined that there be hard copies as well.

“Many of our elders don’t use email or interface with technology. I really want to see a copy in their hands. That’s important to me,” he said.

Gudgel also has a personal investment in the project.

“It almost becomes an affirmation that during their lifetime where they experienced so much, that this is a final chapter and acknowledgement of all they’ve done,” he said, referring to the local residents whose lives are represented in the volume. “A pat on the back, a fist bump for a job well done.”

As historians, McGruder and Gudgel both see significant changes in the African-American presence in Yellow Springs. Central Chapel A.M.E. Church and First Baptist Church have declining congregations; there are fewer African Americans in the village than at any point in recorded community history; African-American businesses have closed; and where once government and school leadership positions were filled with black citizens, now there are few. According to McGruder, many older black villagers look wistfully upon a time that may not come again.

Gudgel feels the project is important to and for people of color living in the village now, and for those who are thinking about moving here to raise families.

“I think for our kids of color, it is a sense of pride. Especially with what is going on in the country with negative portrayals in the news. A sense of pride in race and in the town, our community. It further embellishes the idea that their lives matter here: black, transgender, all.”

When asked about his biggest hope for the project, Gudgel spoke without hesitation.

“That the legacy of what blacks have contributed to Yellow Springs is not lost or becomes dormant. I think if that happens, that will be a real tragedy.”