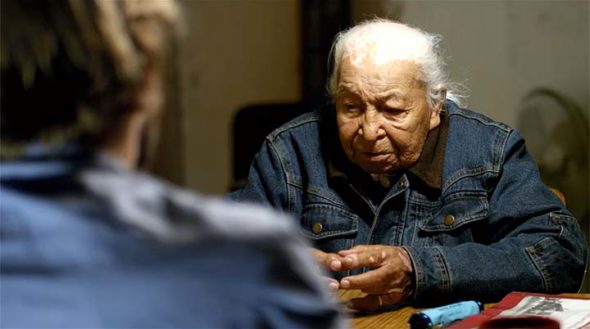 The indie film "Neither Wolf nor Dog," filmed on the Pine Ridge Reservation in South Dakota and starring Lakota chief Dave Bald Eagle, shown above, will be shown in Yellow Springs Monday through Thursday, July 24 to 28, at 7:30 p.m. at the Little Art Theatre.

“Neither Wolf nor Dog,” described by Vancouver film critic Scott Hewitt as a “small-budget, high-quality” film about Native American culture, has been winning audience members’ hearts since its release in summer 2016. And next week it comes to Yellow Springs, with showings Monday through Thursday, July 24 through 28, at 7:30 at the Little Art Theatre.

“It’s been a unique process,” said the film’s media spokesperson Omotola Lajubtu in an interview this week. The director, Scottish filmmaker Steven Lewis Simpson, who is serving as the film’s producer and distributor, tries to promote the film to cities with communities of Native Americans living nearby, as Native Americans have embraced the film, and attend it by the busload. It ended up in Yellow Springs because Little Art Manager Jenny Cowperthwaite Ruka had seen “Neither Wolf nor Dog,” and, wanting to bring the film to Yellow Springs, contacted the director.

Based on a novel by Kent Nerbern, the film stars 95-year old Lakota chief Dave Bald Eagle. In the story, a young man based on Nerbern is drawn into the heart of Lakota country in South Dakota as he takes a road trip with Bald Eagle. The film was made in the Pine Ridge Reservation in South Dakota.

According to critic Hewitt, the film is “intimate and focused,” partly because “its cast and crew are minimal, the sets are real places, and the camera work is straightforward.” The real star of the film, according to Hewitt, is the “sweeping Great Plains landscape.”

One Response to ““Small-budget, high-quality” film on Lakota culture comes to village”