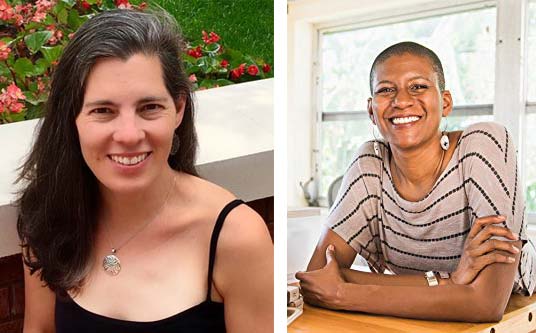 Former YSHS classmates Shuly Cawood, author of ‘The Going and Goodbye,’ and Denise Jacobs, author of ‘Banish Your Inner Critic,’ will talk about their new books at an event Saturday, July 1, at the Little Art Theatre, beginning at 1 p.m. Admission is free. (Submitted photos)

Shuly Cawood and Denise Jacobs both grew up in Yellow Springs, both graduated the same year from Yellow Springs High School, and both have newly published books that are similar only in that they each, in individually distinct ways, involve self-discovery.

In town this weekend to celebrate their 30th class reunion, both women also will come together at the Little Art Theatre for an authors talk and book signing Saturday, July 1, beginning at 1 p.m.

The title of the afternoon event — “From Honorable Mentions to Authors: Shuly Cawood & Denise Jacobs, a Conversation about Life Choices” — refers to the fact that both women received an honorable mention for the then annual Mary Jane Bachtell Memorial Creative Writing Award when they graduated from high school in 1987.

Jacobs, whose new book, “Banish Your Inner Critic,” is a self-help handbook on unblocking creativity, said in a recent phone interview that she was thrilled at the time to be recognized for her writing, regardless of not getting the top honor. Later, she even had the certificate framed and hung on the wall across from her home desk where it gave her inspiration as she wrote her first book, “The CSS Detective Guide,” on troubleshooting CSS computer code.

At the time, Cawood felt the honorable mention was a failure. She  mentions the defeat in an early chapter of her book, a memoir titled “The Going and Goodbye”: “… in my senior year I came in second for everything: salutatorian, homecoming ‘senior attendant’ (runner-up to Queen), honorable mention in the creative writing contest.”

But the years softened and changed her thinking. “Now, second feels fine, even good; it means you’re nearly there, and it offers something that first does not: a second chance.”

The passage also serves as emotional foreshadowing to the pages to come, where Cawood reflects on a life journey marked by second chances and new starts.

Speaking recently from her current home in Johnson City, Tenn., she said the foreshadowing was intentional.

The book is written in chapters that could stand alone as personal essays about specific emotional turning points — and several have been published separately in various literary outlets — but together they create a narrative arc that follows Cawood on a journey in which leaving and loss lead to lessons of love, understanding and gratitude.

While the course explores the beginning and end of her first marriage, it concludes with a sense of finding home and security within herself.

“I gave up a lot of things in choosing that particular person to leave with and marry.”

As for Jacobs’ books, which is subtitled “Silence the Voice of Self-Doubt to Unleash Your Creativity and Do Your Best Work,” the individual chapters offer a practical guide for identifying, examining and dispelling the internal messages that challenge or stop us from personal creativity — in whatever form creativity may manifest in our lives and work.

Jacobs, speaking from her current home in Miami, Fla., said the impetus for her new book came in writing “The CSS Detective Guide” in 2010, a process she has described on her website as frought with anxiety and mired in self-doubt.

The cause of her self-doubt was baffling, as coding for website creation and development was her area of expertise. She even taught classes on it at a local community college.

So she conducted some research and “began amassing all this information” about what blocks creativity, particularly focusing on the concept of the inner critic.

She also had a pivotal experience at the completion of “The CSS Detective Guide” when she realized that a period of almost “euphoric” creativity and productivity was accompanied by the absence of an internal critical voice.

In the meantime, she wrote an article and developed a public talk on “Banishing the Inner Critic,” both of which earned “enthusiastic” responses. She said she found she wasn’t the only person dealing with the issue.

“This was something that people really struggled with,” she said.

In all of her research, however, she never found a book that addressed all the various facets of the issue. So in essence, in writing “Banish Your Inner Critic,” she wrote the book she had hoped to find, including neuroscience, psychology, mindfulness principles and self-compassion research. She combines all that with personal storytelling, cheerleading and practical excercises.

Now, as the founder and CEO of The Creative Dose, she calls herself a “Creativity Evangelist” and travels around the world speaking at conferences and consulting with companies “to spark innovation in people, teams, and workplaces, particularly those in the tech world,” according to her official bio.

The extensive travel can get wearying, but it is exactly what she wants to be doing, and also fulfills the dream she had when she got her bachelor’s degree in international studies, with a minor in French, from Washington State University. The web design came after she entered the work force and saw a need. “I didn’t study computer science. I taught myself to do web design,” she said.

Cawood, whose work includes fiction, nonfiction, poetry and personal blogging, is also doing just what she always wanted to do, though the path had its detours as well. “I always knew I wanted to be an English major,” she said of entering college. And by her junior and senior years at Wittenberg University, she was set on continuing her schooling to get a Master of Fine Arts in poetry.

“But my professors talked me out of it,” she said. “They said, ‘Get some real work experience. Don’t go straight to graduate school.’”

So she tried that, but finding a job as an English major didn’t fare well. Many of the jobs that involved any kind of writing wanted someone who had studied journalism. When a job wasn’t forthcoming by mid-summer, she and her mother, Sonia, looked around for a journalism program that would accept applications that late in the year. Ohio State Unversity did, and accepted her. When September came and she still didn’t have a job, she went off to OSU.

But she said she felt out of place on the large campus and in the journalism program itself. She admired the profession — which was her father’s — but it wasn’t the kind of writing she wanted to do. And she had no interest in the theory and methodology of it. She was ready to quit after the first year, until her father called and encouraged her to stick it out, saying, “You’ll never regret having a master’s degree.”

She also used that second year to take as many creative writing electives as she could.

The MFA came later. Though a frequent attender of the Antioch Writer’s Workshop, she had let the MFA dream go until her second husband, Preston, suggested she reconsider. She applied and was accepted at Queens University’s low-residency program. “It really shaped my writing,” she said of the experience.

Particularly, it helped hone her interest in “making the small thing interesting.”

Publishing a memoir at the age of 48, when her life has not been marked by great tragedy or conflict is about just that.

“The memoir is about the everyday, small things,” she said. “There is nothing in my book that is not ordinary.”

Both women pointed to their mostly positive — nearly idylic in retrospect — experiences growing up here as being formative to their identities, worldviews and careers. And their sense of home is still tied here.

They both recounted wonderful memories of going to the library — Jacobs even worked there for a time shelving books —  and they both appreciated a small school system where they were seen and encouraged by teachers and staff to pursue their gifts.

“I want people to know how much I love Yellow Springs,” Jacobs said, her voice catching. “I am really happy that I grew up there. It was such a precious place.”