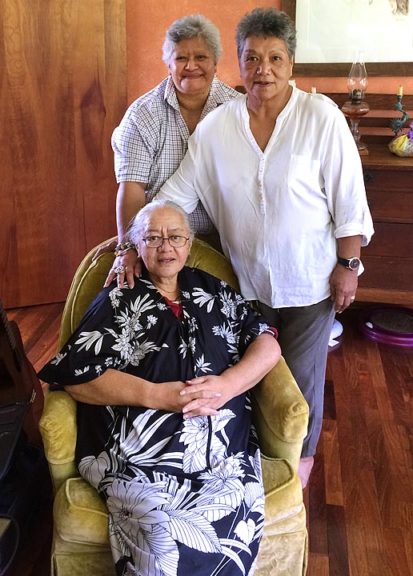 Three Maori tribal elders of the Waitaha nation are visiting the village at the invitation of tribal priest Raymond Ruka, who lives in the Yellow Springs area. While here, the women, who are members of the Waitaha Grandmothers Executive Council, will offer prayers, earth blessings and storytelling, including at the local schools. Standing, from left, is Kathleen Ruka Wheremate and Jane Mihingarangi Ruka. Seated is Rosina “Rosie” Huriwai. (Photo by Aaron Saari)

A rare visit from Maori ‘grannies’

Only Raymond Ruka could have the tribal standing to extend the invitation that has brought three Maori tribal elders all the way from New Zealand to Yellow Springs.

Ruka issued a “tautoko” to three members of the Waitaha Grandmothers Executive Council in the Waitaha nation, a tradition in which Ruka is a priest.

The Waitaha — pronounced why-ta-ha — are an ancient matriarchal peace nation from Aotearoa (New Zealand). The name for their people translates as “Water Carriers.”

“It wasn’t like we could say no,” joked Jane Mihingarangi Ruka, Ruka’s biological and spiritual sister. “He’d never issued a tautoko before, and we weren’t going to let our brother down.”

The room filled with laughter as Rosina “Rosie” Huriwai and Kathleen Ruka Wheremate, the two other “grannies,” as they are wont to be called, nodded along. A tautoko is more than an invitation, they explained. The word has multiple meanings, but when a Waitaha priest issues one, he is essentially extending a call to the embodied sacred feminine to be an advocate for ancient wisdom, the grandmothers said. It’s not an invitation that can be easily turned down.

“The guiding principle for the Waitaha nation is matriarchy,” Raymond Ruka explained from the living room of the Yellow Springs area home he shares with his wife, Jenny Cowperthwaite Ruka. “I felt the need at this time in the world, with these politics and destructive beliefs in ordinary life, to ask my sisters to come. It was a request to come and balance energies, to authenticate wisdoms.”

While here on their journey, or h¯apai, the grandmothers will participate in prayers, earth blessings and storytelling. The summons may have been extended by Ruka, but the agenda for their visit has been organized by Yellow Springs resident Peggy Koebernick. The grandmothers and Raymond Ruka will participate in a private ecology program at the Cincinnati Nature Center on Saturday, Aug. 26, which will include traditional Maori blessings of trees. On Aug. 29, they will be exchanging stories in classes at Mills Lawn Elementary School and visiting history classes at Yellow Springs High School and McKinney Middle School. Koebernick says that those who wish to attend the event in Cincinnati are able to do so, and can contact her at 767-9331.

The various events reflect the intention behind this h¯apai, Raymond Ruka explained. All things in Waitaha culture begin honoring the earth mother, and storytelling is a primary vehicle for passing along wisdom.

“Because of this deep reverence, we understand that our growth and provisions come from what mother earth provides,” Raymond Ruka said. “Everything comes from the same source, so she demands of us proper behavior, gratitude and appreciation for the physical and spiritual gifts we enjoy.”

Their attitude of gratitude is paired with a sense of mission, not just to advocate for native people, but also to deliver timely messages to others about the destructive powers of patriarchy and colonialism, the grandmothers said. This again is rooted in a connection to the earth.

“The family unit was one of the things destroyed by industrialization,” Jane Ruka said. “With movement away from rural communities toward urbanization, families were broken. We moved further and further away from Papat¯u¯anuku — Earth Mother. That must change.”

Raymond Ruka added, “We demand that the system of bureaucracy be filled with this venom of peace. Restorative justice comes from us, from the Maori people. We are the progenitors.”

The grandmothers said that justice is at the heart of their journey: talking to others about how to deconstruct systems that keep people in anger, pain, debt and alienation. The high rate of imprisonment in the United States is especially troublesome to Raymond Ruka.

“The first avenue of seeking justice is the victim and perpetrator meeting — this requires rounding up their families, who come to a mutual agreement only after the egregiousness of the situation has been acknowledged, Raymond Ruka said. “Together, reparations are decided upon to help restore the community.”

There is no blame or shame, Raymond Ruka added. And instead of saddling taxpayers with the financial cost, which in turn can create community animosity toward perpetrators, the restorative model seeks to affirm all persons and build community through deliberative processes.

The Waitaha people “awoke once again” 20 years ago, Jane Ruka explained. In the late 1990s, the Ruka matriarch, Rangitakina Te Wharau Ruka TeKorakora, feared that the wisdom of the Waitaha grandmothers was not being passed to newer generations because of the pervasiveness of colonialism.

“She awoke the matriarchy,” Jane Ruka said. “We were suffering under the patriarchy and she saw that the younger generations did not know who they are. They were suffering just as all indigenous peoples suffer. She awoke New Zealand to the dangers of colonized minds in children, and then she died. We did not have one single person who could replace this great woman, so we formed a council.”

The council could only assemble, Raymond Ruka explained, through a balancing of energies. Matriarchy does not mirror patriarchy; there is no hierarchy of genders, he said.

“Our godhead is the goddess of peace,” Jane Ruka said. “But it is balanced by the male energy, of which my brother is the existing occupant of our equivalent. Males are the carriers of knowledge, we are the authorities of spirit.”

According to the two-volume set “Whispers of Waitaha,” which chronicles the traditions and history of the Water Carriers, part of the awakening of the matriarchy is sharing the tikanga, the values and cultural practices of the Waitaha, with the rest of the world.

“The whisper of the grandmothers speak first to the decision and preparation for journeying,” the book explains. “They then speak of much of the sacred knowledge guiding all decisions in travel, landing and living.”

This deliberative process is the foundation of the council, the grandmothers said. The Ruka matriarch whispered a task to her eldest son, and then she passed away.

“Our now-departed brother walked around the world and placed stones of peace in homes and communities so that we could know whom to meet when we came — almost every country has one,” Jane Ruka said.

With the death of their brother, both the female and male energies underwent processes of discernment. For Raymond Ruka, it led him to the United States. The female elders traveled to find the stones left for them. A loose collection of grandmothers became a cohesive whole, which now includes seven international representatives from countries around the world, and 27 national representatives in New Zealand. The Waitaha Executive Grandmothers Council is a sitting member of the United Nations, and is in the process of securing standing within the International Union for Conservation of Nature.

The grandmothers rarely leave New Zealand, and while they are happy to see their brother, they are also aware that America once belonged to indigenous people who were the victims of genocide and colonialism, they said, adding that it is a reminder of the pain shared by first nations around the world.

“Generations of our nation have tried to recover where we were before colonization,” Jane Ruka said. “Progress is really slow, so when it is your turn to be an elder, you recognize the strides taken and progress taken by previous parents. And then you act.”