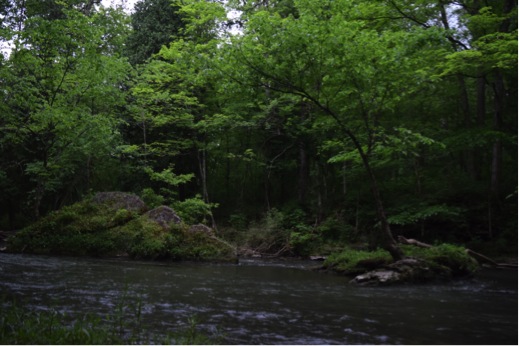 A snap from an afternoon hike of mine earlier this summer. Taken at Clifton Gorge.

Like many people, I have always found myself at my most relaxed when I’m spending time outside. More specifically, I find my most quiet moments on sidesteps and river rock hops slightly off of any hiking trail.

For this reason, I was extra excited about spending time in Yellow Springs with its ample amount of forest in and around the town. Over this past summer, I have spent a considerable amount of time wandering around the river and rock formations sprinkled throughout the Glen and Clifton Gorge.

Being engulfed in green spaces such as these, even if only for a half hour, does wonders for my soul. Adjusting to a new home and location has been admittedly hard for me, as I have always been somewhat averse to changes, so it’s a great comfort for me to find the same sense of calm in Yellow Springs green spaces as I had found in the forests of Athens, Ohio (when I made my last big move). Call it a leaf-woven security blanket, if you will.

It’s been so much fun spending afternoons and evenings deep in the Glen, racing the sun to the trail exits with my boyfriend Myles. All the while, I still have absolutely no idea how we end up exiting where we entered (unlike my father, I was born with zero sense of direction). All I know is that we always end up near the large waterfall in the Glen, with the vines dangling down the small, uneven rock cliffs that support the wooden bridge, and that’s alright with me.

In fact, that is my New Spot. My old New Spot was the back end of the asylum cemetery at The Ridges in Athens. I spent many afternoons reading, thinking and napping on that hill overlooking a mucky, but pretty pond and many crumbling unmarked graves. It had a perfect head-sized dip in the ground, which made afternoon grass napping all the more enjoyable.

While there aren’t any head-sized dips in the rock formations alongside the waterfall and river, there is a magnificent Jess-sized rock. I found it just yesterday. Myles, his brother Cullen and I had gone for an evening hike in the Glen, when we wrapped up our time outdoors at the waterfall. I discovered a little pathway further from the waterfall, so I went to check it out.

Just after the narrow path where I had to walk foot over foot, it widened to show two large rocks that appeared perfect for lounging. I stretched out, rolled my neck, and meditated for a bit before I laid down on the cold stone (which felt great after a hike). Pretty soon, I was so relaxed that I fell asleep.

Basically, what I’m getting at is that I am so grateful for the nature surrounding me here in Yellow Springs. It gives me such feeling of familiarity even though it is still a new environment for me. Having a new New Spot, while it is a change, is a welcomed one as far as I’m concerned.

*Jessica Sees is an Ohio University student interning with the News.