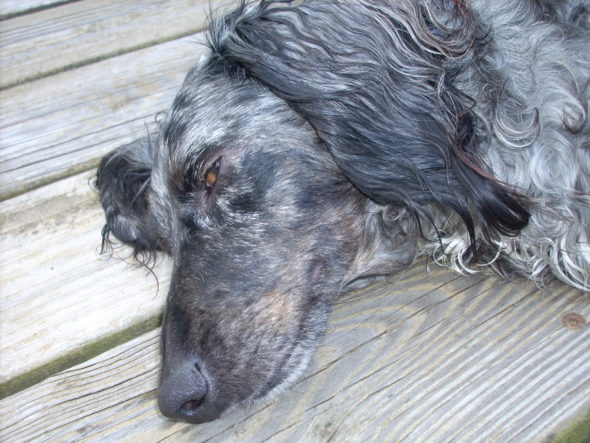 Skyler, mulling another poem after a romp in the yard.

BLOG— The ‘dogginess’ of poetry

I love my husband. When I recently went away for two weeks, I called him every day, and at odd moments, some aspect of him would blaze up in my mind, like a candle just lit and gorging on air.

But I did spend my time away besotted with other people’s dogs. “Can I pet your dog?” I whined and wheedled, more obnoxious than charming. People acquiesced, and dogs did, too. The tail thump. The liquid gaze. The smile — oh, the smile!

I was serially in love, and all the love that flowed out of me also flowed back to the 20-pound, low-to-the-ground canine who was thumping, gazing, smiling — at my husband — back home.

Why this difference, I wondered? Why did dog-love make me promiscuous, and husband-love keep me loyal? Of course, there’s that little matter of marriage vows, our mutual assent to fidelity and monogamy. Our household could accommodate a second dog; a second husband, not so much! But I sensed something else, something subtler at work.

The truth is, I missed our dog, madly, but I also missed dogginess. Call it canine energy. Call it The Way of the Dog.

One evening while I was away, I watched a black Lab retrieve a ball, again and again, with tireless muscular grace. His human threw it far and fast with a “chuck-it” ball thrower; the Lab followed in furious pursuit, often plucking the ball from the air mid-flight. I felt like I was witnessing a sublime subatomic event in which an accelerated particle simply vanished into the maw of space-time. Where was that dang ball? Why, here it was again, snatched back from the void and rematerialized in the grass at the human’s feet.

There was something deeply touching, and almost mystical, in the experience. The ferocity of focus — when has a human ever applied such a laser beam of consciousness to anything as beautifully humble as a ball? (Or is this precisely the magic of sports like tennis and baseball?) And then there was that action of mid-air arrest — so total, so commanding, yet supremely gentle, a form of grace in both senses of the word.

It was only after I awoke from this reverie of watching that I recalled my own little hound had never chased a ball in his life, much less caught one mid-air! Yet Skyler, too, practices The Way of the Dog, his own reckless ballet in pursuit of stuffed toys, rags and tossed treats. And small and stumpy though he is, he rockets through the grass and turns jubilant barrel-rolls that a jet-fighter pilot would be proud to perform.

There is a physicality to dogs, an ease and joy in the physical, that I love and crave. Because I love nearness with my dog, I seek out nearness with other dogs. Of course, I love nearness with my husband, too. But between humans, the physical is complicated; it’s mediated by the mind, and beautifully-confusingly, by words. We bring other humans near, and we keep them away, with our words, often achieving both at the same time. With dogs, touch is talking, and talking is touch. Our voice tone is received as hard or soft hands, and we ourselves begin to feel our words, their hardness and their softness, tangibly in our mouths.

And so this meditation takes me to an unexpected place: to poetry. Which was the reason I left Yellow Springs for two weeks, left my husband and dog. Poetry — the poetry I love — is the place where words are not (or not just) vehicles of meaning, but occasions for music and feeling. Meaning is the least and last thing I look to poetry for, particularly the meaning of analysis, explanation, strict sense. The meaning that arises from a poem is like fog off a lake. It surrounds you; it leaves you; you let it go.

But music and feeling are visceral. Poems that move me move me, bodily and emotively. The best poems snatch something from the air, and return it — the same thing, yet transfigured by the gesture — at my feet. And I am transfigured, the same and not the same.

Are poems, then, the dogs of literature and the imagination? Valuable, despite all their vaunted “difficulty,” for exactly the opposite — for canine directness, for impact? It’s probably not that simple. Or maybe it is.

When I returned from my time away, I held my husband close. We spoke our news, and our joy at being together again. Then the dog and I got down on the grass and rolled.