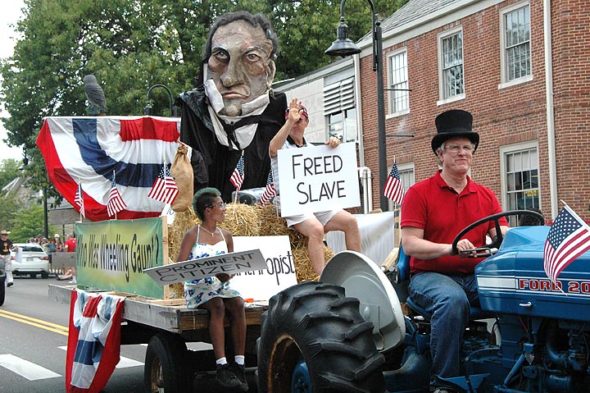 The local effort to erect an “over-life-size” bronze statue of Wheeling Gaunt made a splash at the Yellow Springs Fourth of July parade this summer. Project steering committee member Dave Neuhardt, president of the the Yellow Springs Historical Society, is behind the tractor wheel. Visible on board the float, which featured a papier-maché depiction of Gaunt’s head, are Malaya Booth and Bob Huston. (Archive photo by Diane Chiddister)

Wheeling Gaunt is a local historical figure who not only deserves to be remembered, but also celebrated on a large scale, says a growing group of local individuals and organizations who have launched an effort — the Wheeling Gaunt Sculpture Project — to erect a bronze statue of Gaunt in the village.

Locals know of the village park that bears the Gaunt name, and most know about the distribution of flour and sugar to village widows and widowers in December that he initiated in his will. They likely know he was African American, and that he had been born into slavery. But after that, the details get a little fuzzy.

In his lifetime, however, Gaunt was a leading member of the community.

Such public acclaim is no small feat for any person, but is especially remarkable considering Gaunt’s life story, said Kevin McGruder, an assistant professor of history at Antioch College, who is participating in the project as a representative of the local 365 Project.

Born into chattel slavery in Kentucky in 1815, Gaunt purchased not only his own freedom in 1845, but also, later, the freedom of his first wife, Amanda — and reportedly that of another person as well — before settling in Yellow Springs in the early 1860s. Here, he became known as a successful entrepreneur and philanthropist, earning much of his wealth through real estate. He is best known for his bequest to the village of the land where Gaunt Park now stands and the provision that its rent income be used to buy flour for widows at Christmas. Although the Village turned the property into a park, they honored the bequest, eventually adding sugar and then including widowers.

“He changed the narrative” for what happened to an African American born into slavery, McGruder said. “Not only did he attain his freedom, but in freedom he thrived in most ways that people did not.”

“Wheeling Gaunt is an exceptional individual under any circumstance,” Fleming wrote in an email this week from Washington, D.C., where he is working on a project. Gaunt’s “real legacy is what he achieved in spite of racial barriers. His life is an example young African Americans can emulate as well as serve as an inspiration to all citizens of our community.”

Fundraising is already under way, prominently announced with a large, eye-catching float in the Fourth of July parade, where sculpture project supporters handed out more than 200 small, hand-stuffed bags of flour tied closed with a tag describing the effort.

Their goal is to raise $114,870, which is the estimate given organizers by locally based sculptor Brian Maughan, who will create the statue.

Maughan, a nationally recognized artist who moved to Yellow Springs from New York in 2006, has created sculpture installations of radio announcer Bob Uecker and baseball commissioner Bud Selig. He also created a bust of Gaunt, which was unveiled in January and is now part of the YS Arts Council’s permanent collection on view at Antioch University Midwest.

The idea to erect a public statue of Gaunt began with the Yellow Springs Arts Council, specifically artist and Gallery Manager Nancy Mellon, who with her husband, Steven Deal, and their two sons, lives in the house on North Walnut Street thought to have been Wheeling and Amanda Gaunt’s home.

Since purchasing and moving into their home in 2003, Mellon and Deal said they have felt a responsibility to Gaunt and his legacy.

They have conducted extensive research, even traveling to New Carlton, Ky., where Gaunt was born. Deal’s research has included exploring local deed and tax records from the 1860s–90s. From those, Deal learned Gaunt owned the entire block on which his house was located.

But Gaunt was more than a land owner, McGruder said. “He was community minded” in ways that went beyond the bequest of his will. One example is the bell he donated to the AME church, where he was a member. McGruder said the bell remained with the church until about 10 years ago when it was stolen.

Sculpture project participants say the statue effort is significant not only because it celebrates an important local figure, but also because it honors a person of color in a form that has been rare in the U.S. public arena. McGruder said statues of African-American figures are few, especially in smaller communities such as Yellow Springs.

It’s time to change that, agree Mellon and Deal, noting the recent national debate over statues and monuments that memorialize Confederate figures and symbols from the Civil War.

Fleming said the timing is relevant for another reason as well. “As Yellow Springs becomes less diverse in the 21st century, I think that it is important for all of us to remember those African Americans who were among the early settlers of Yellow Springs.”

While there is a lot of energy behind the project, organizers expect the effort to take at least four years.

“Truly, this is a long-term project,” Mellon said. She estimated two years of fundraising followed by two years to create and erect the statue.

The next immediate steps include  creating some promotional signs and sharing information about the project widely. Additional people and partner groups are welcome, Mellon said. The next meeting is 7 p.m. Thursday, Aug. 3, at the Arts Council gallery.

She said her experience so far has been one of enthusiastic support throughout the community, which she finds extraordinary. “How often do you have a project in Yellow Springs that right away people get behind?” Mellon said.