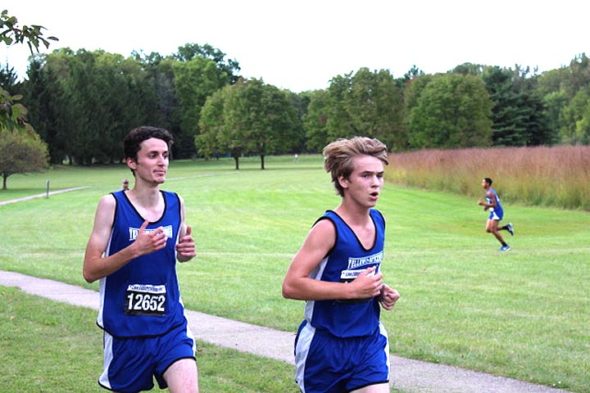 Girls varsity volleyball
Coming off a tough loss to a conference rival, the Bulldogs were determined to make up for past mistakes. On Monday, Sept. 11, they took on the Wildcats of Springfield High School at home for a nonconference match. In their first four-game set of the year, the Bulldogs won the match 25-13, 24-26, 25-21, 25-23.

Thursday, Sept. 14, the Bulldogs traveled to Jefferson Township High School to take on the Broncos. The Bulldogs wasted little time showing the newcomers to the conference just how they have won the conference title the past two years. Missing both setters for the match up, Yellow Springs still took down Jefferson easily 25–10, 25–17, 25–8.

Middle hitter/blocker turned temporary setter Alex Ronnebaum put up 32 assists, 13 points, 5 aces, 5 kills and 1 dig, while Elle Peifer scored 12 points, 7 aces, 7 kills and 2 digs. Kelsie Lemons contributed with 6 points, 2 aces, 4 kills and 2 digs. Payden Kegley took off her libero jersey to play front row for the evening, scoring 6 points, 3 aces, 5 kills, and having the only block in the match. Olivia Snoddy came up from the JV team to contribute 12 points, 9 aces, and 7 digs.

On Saturday, Sept. 16, the Bulldogs were surprised to find that, once again, their two setters would be missing for a non-conference game against Northeastern. The Jets came out strong against the Bulldogs who just could not find their footing, losing 16-25, 9-25, 18-25. Payden Kegley led the team with 7 points, 2 aces, 1 kill and 15 digs followed by Elle Peifer with 4 points, 1 kill and 3 digs. Alex Ronnebaum helped with setting again putting up 3 assists, 3 points, 1 ace, 4 blocks, 3 kills and 3 digs, while Amani Wagner helped with 3 points, 1 ace, 1 kill, 5 assists and 3 digs.

The Bulldogs are now 7-3 overall and 3-1 in the conference. They travel to Dayton Christian and Fairborn and host conference rival Troy Christian this week.

Cross country
On Saturday morning, Sept. 16, 31 YSHS/YSMS cross country athletes stepped to the starting line at the 42nd Graham Cross Country Invitational. Fourteen schools competed and the Bulldogs did well despite the hard training week they had.

The McKinney girls team earned a fifth-place finish as they ran in a tight pack and pushed one another to an outstanding performance. The McKinney boys continue to show steady improvement as they strode to an eighth-place team finish. These young men ran the last race of the day in hot and humid conditions on a tough course.

Also, the high school boys continue to demonstrate leadership to the rest of the team with a strong sense of true team unity. In a very tough field they ran to a seventh-place finish with 12 YSHS harriers completing the race.

The determined YSHS girls deserve special praise for overcoming the shortage of runners and continuing to shine. Jude Meekin and Ivy Tebbe have earned the respect of their team members and coaches with their aggressive running. Jude earned another top-10 finish (8th) and Ivy Tebbe ran a solid 31st place.

JV volleyball
The JV Lady Bulldogs played the Northeastern Jets on Saturday, Sept. 16, at home. The Jets won the match in two sets 24-14, 25-18. Freshman Indigo Jackson had four digs and two aces, and Kayla Brown had four digs, an ace and a kill.