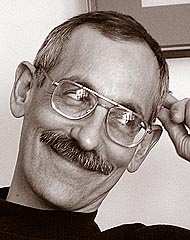 He is survived by mother Bernice Ezekiel Brant, of Dayton; son Edward, of Atlanta, Ga.; sister Judith, of Yellow Springs; niece and nephew Clara and Eizo Lang-Ezekiel; and a large network of loving cousins. He was preceded in death by father Herbert and brother Michael.

Jonathan graduated from Colonel White High School and Yale University, and did graduate work at George Washington University. He applied his brilliant and rigorous mind to everything he did.

Jonathan worked as a researcher and an editor in the publishing industry for years, including research work on the criminalization of the mentally ill. He recently helped Susan Stefan with her 2016 book with Oxford University Press, “Rational Suicide, Irrational Laws: Examining Current Approaches to Suicide in Policy and Law.” She said of him in her introduction: “Research assistance beyond my wildest dreams was provided by that peerless researcher and poet, Jonathan Ezekiel (this is the closest my publisher can get to printing your name in neon).”

Jonathan was a prolific poet and an avid walker who frequented Gaunt Park daily.  A memorial service will be held at a later date.