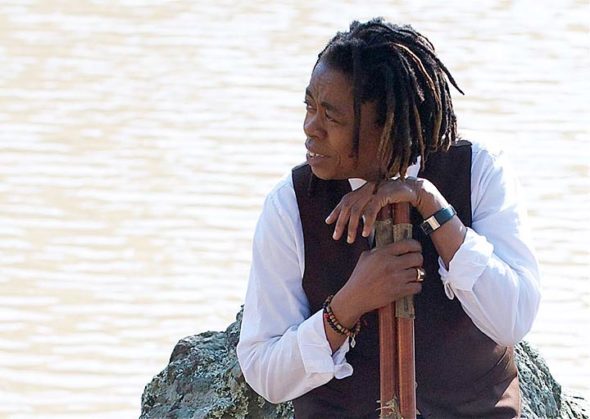 The annual fall concert is titled “Together We Bring on the Light.” The World House Choir and Melanie DeMore will present a program Roma describes as “aimed to uplift and empower.” Performances are Sept. 8 and 9 at 7 p.m. at Antioch College’s Foundry Theater. On Sunday afternoon, Sept. 10, there is a 2 p.m. concert at Wayman Chapel AME Church in Dayton.

The programming will include, among other selections, the choir performing “Take Me to the Water” by Rollo Dilworth, a composer and chair of music education and music therapy at Temple University.

“I think of it as a combination of ‘Wade in the Water’ and ‘Down by the Riverside,’” Roma said. “Going in the water is about facing fear; we may not make it to the other side, but we’re going together.”

Featured guest Melanie DeMore first worked with Roma in 1992. They have worked together numerous times subsequently, developing a friendship.

“Melanie is about helping people be actualized, to reach them in the deep place,” Roma said.

DeMore, located in Oakland, Calif., is described on her website as a vocal activist. She has performed around the world, founded a Grammy-nominated singing group, and is known for bringing the Gullah tradition of stick-pounding to the general public.

“She’s done this in Washington, D.C. with a 450-voice choir with men in tuxes and the whole deal,” Roma said. “There’s just something about that elemental rhythm that brings something out of all of us. And she brings people together, gets them singing, and inspires them.”

According to a 2012 online interview of DeMore, during the slave trade Africans were brought to the Gullah islands; however, being disconnected from the mainland helped them retain tribal customs by redefining them. Denied drums, they turned their homes — houses raised on stilts above the water — into drums. Using sticks, the floor was transformed into a drumhead. As a form of worship, they perform their holy ring shout dance to the time of sacred rhythms.

“The stick-pounding originally is all part of spirituality,” DeMore said in the interview.

Music has always been a spiritual art for Roma, who grew up in a Catholic family but went to a K-12 Quaker school and has worked extensively within the Unitarian fellowship.

“I call myself a Quakitarian,” she joked.

The Quaker emphasis on peace and the Unitarian stress upon the inherent worth and dignity of each person combine in this program with her love for African-American gospel music. As Roma spoke, she referenced Martin Luther King Jr.’s “Letter from a Birmingham Jail” and lyrics from soul singer and civil rights activist Marvis Staples’ song, “(If You’re Ready) Come Go With Me,” which is featured in the upcoming concert.

“Together, let’s banish fear and raise our collective voice for justice, for radical hope, for love and for our commitment to the common good. Let’s get interconnected,” Roma wrote in her “Director’s Blog” on the World House Choir webpage.

The programming for “Together We Bring on the Light” reflects both her spiritual rootedness and the World House Choir’s mission statement, which emphasizes communities striving “toward justice, diversity and equality.”

“Many people are weary; they have been emotionally spent and spiritually drained by what is happening now,” Roma said. “We’re singing to uplift.”

When asked to summarize the program she has put together, Roma quoted from the above-mentioned Mavis Staples song.

“‘Peace and love will grow between the races, love is the only language where there is total communication,’” she said. “You know, get everyone involved and participating and feeling connected and uplifted, and not being fearful of taking stands. We all have a responsibility. We all have a stand to make.”