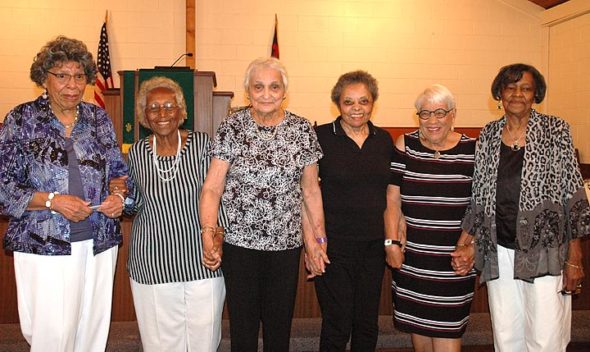 Six members of the Victorettes held hands and sang at Central Chapel A.M.E. Church on Sunday, Sept. 3, capping off this year’s well-attended reunion. From left are Phyllis Jackson, Dorothy Allen, Marie Payton, Dorothy Boyce, Betty Ford and Isabel Newman. All were members of the singing and service group founded by Boyce in 1944 and active until 1946, with friendships that have lasted a lifetime. (Photo by Audrey Hackett)

We are the Victorettes of Yellow Springs. We want you to know us and hear us sing for the Army, the Navy and the Marines.

In the spring of 1944, Allied troops in Europe were preparing for D-Day. Battles were being fought throughout the Pacific. And in Yellow Springs, with husbands and brothers and friends away at war, a group of young African-American women came together under the leadership and musical direction of Dorothy Boyce. They called themselves “The Victorettes,” and for two years they put on vocal concerts and plays, organized youth dances and picnics, sent cards and letters to local servicemen stationed overseas and undertook service projects within their church and community.

“It gave us something to do, it gave us purpose,” Phyllis Jackson said this week. “And it gave us a reason to be happy,” she added, recalling the difficulties of the war years, with loved ones far from home.

Busy in the community or singing in their signature “V for Victory” formation wearing formal evening gowns, the Victorettes made their mark on Yellow Springs, and on each other. The young women grew up together in the village, and some were related by blood. Their shared experiences as Victorettes deepened those bonds, making them friends for life.

“We all grew up together, and we remained friends. Some girls moved away, but they came back for reunions,” Isabel Newman recalled. “We’re all hooked up together.”

The strength of their ties and the mesh of family and friends was in joyous evidence on Sunday, Sept. 3, at the Victorettes’ annual reunion. Around 50 people gathered at Central Chapel A.M.E. Church to celebrate the surviving Victorettes, remember those who’d passed away and share memories of earlier times in Yellow Springs.

One by one the Victorettes were introduced: Dorothy Perry Boyce, Dorothy Mundy Allen, Betty Cordell Ford, Phyllis Lawson Jackson, Isabel Adams Newman, Marie Adams Payton. All are in their 80s or 90s. Also surviving but not in attendance were Anna Hull Johnson and Mary Hull Bowers. The women’s maiden and married names are testaments to the group’s close family ties — and longevity in Yellow Springs. Many of the names are among the village’s oldest families, some with roots back to the Conway Colony, a group of freed slaves who settled here in 1863.

Fond recollection, teasing and heartfelt tributes abounded at Sunday’s event. Asked why she’d formed the Victorettes, Dorothy Boyce said, with a broad smile, “Why, they were such an attractive group of young women, and so talented.” Betty Ford quipped, “Dorothy needed something to do!”

Then Marie Payton took the microphone. “Dorothy was a terrific leader and inspiration,” she said. “I love her dearly. There’s no one else I would put on as high a pedestal.”

Boyce, now 96, was a recent Wilberforce University graduate and young married woman in 1944. Her husband, Lyonel, was away at war, stationed in Guam, according to a history of the group written by Isabel Newman for the forthcoming “Blacks in Yellow Springs” encyclopedia. Back home in Yellow Springs and living with her parents, Boyce sought to bring together other young women in their late teens and twenties.

“Boyce was somewhat selective in accepting members to the group. She wanted the Victorettes to be young women, not children,” the encyclopedia entry reads. Boyce hoped the group would be “the vehicle to bring everyone together while benefiting the community and church.”

That goal was met. An early history of the group, likely written by Boyce herself, states the Victorettes’ founding purpose was to raise funds for and render services to Central Chapel. (Some members belonged to the A.M.E. church, others to First Baptist.) In its first year, the group performed “enthusiastically received” musical programs such as the Spring Musicale and Summer Concert series, and staged a play called “I Want a Nurse,” deemed a “hilarious success.” The young women performed not just in Yellow Springs, but also traveled to churches and colleges throughout the area. Their audiences were primarily, though not exclusively, African American, according to Newman. When Eleanor Roosevelt came to Antioch College in the summer of 1944, the Victorettes sang for her.

Much more than a musical director, Boyce was a leader and guide, a role model to the mostly younger women of the group.

“Dorothy was a blessing to us,” Phyllis Jackson said.

Last Sunday’s event was organized by Sharon Perry and Karen McKee, ably assisted by Perry’s husband and Marie Payton’s son, David Perry Jr. McKee is the daughter of former Victorette Naomi McKee, who passed away in 2011, and niece of Isabel Newman. The younger generation took over organizing the reunion several years ago.

Reunions have been going on for decades — timed for Labor Day weekend to coincide with the Bryan High School all-class reunion, which brings many former villagers back to town. For years, the gatherings were just for the Victorettes themselves. About 15 years ago, Sharon Perry, daughter-in-law to Payton, was invited in. And from there, other daughters and female relatives were brought into the fold. Then the husbands, sons and brothers started clamoring to come, and the event became the de facto family reunion it is today — with the Victorettes, their spirit and their accomplishments, firmly in the center of it all.

“It makes me happy to see them happy,” Sharon Perry said. “It feels like a big birthday party for my mothers — all my mothers. It took a village to raise us children. I’m still learning from them, I still have so much respect for them.”

McKee recalled that the Victorettes remained her mother’s favorite organization in a life filled with community service and involvement. The group had enduring significance for its members because it gave the young women a public role and shared purpose, she speculated.

“In those days, black women were not typically part of other organizations in the community,” McKee said. “It was important for them to be with one another, to support one another and to make a contribution to society.”

In a local black community that, while smaller, remains strong and vibrant, the Victorettes provide a focal point, according to Perry.

“The black community here is very strong, and the Victorettes keep the memories going,” she said.

The memories came bubbling up on Sunday. Newman recalled visiting the Perry family farm on then-rural Wright Street when she and Dorothy were girls, and getting milk straight from the cow. Tales of growing up mingled with news about relatives far and wide.

Siblings, children, grandchildren, cousins, nieces and nephews — some from as far away as California, Oregon and Wisconsin — stood up and introduced themselves, often with the wry quip, “I’m related to just about everyone here.” Russell Cordell Jr. may have been the unofficial winner of the kinship award, proudly claiming relation to four Victorettes. Locksley Orr and helpers prepared a light meal, and Robin Jordan-Henry blessed the food and said a prayer for the Victorettes no longer living, including Geneva Gudgel, Maxine Jones, Naomi McKee, Nellie Hughey, Barbara Hamilton, Charlotte Adams and Clara Jane Berry.

And then it was time to sing. Everyone moved into the chapel, and Dorothy Boyce, an accomplished pianist, made her way to the grand piano. She now lives at Friends Care, and her memory has been worn down by dementia. But she hasn’t forgotten how to play.

“When she gets on the piano, it all comes back to her,” Sharon Perry said.

As Boyce launched into the Victorettes’ own special song — “We are the Victorettes of Yellow Springs …” — her five dear friends lined up in the front of the chapel, and sang together one more time.