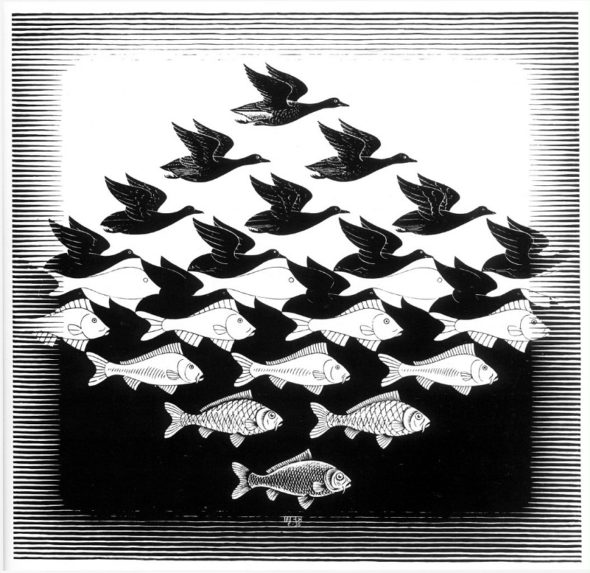 Fish find rest at the bottom of the river. They are the soft stones. They face into the current. Fins fluttering like river grass, they dream. Water on its way to somewhere else fills their gills.

Just below the surface, minnows do what minnows do: dart. Only those aren’t minnows, they’re shadows! On a sunny day, the school doubles its enrollment. The new pupils do as the other students do.

The minnows say they were once a single skinny fish. Long as the river. Then the line broke, under the shadow of the first wings. Minnows are short lines now, just a few syllables each. But still a single poem.

A rush of ochre leaves, the river’s rogue travelers. What the Scottish call “tinkers.” They’re from everywhere, they go everywhere, they live to move. Small boats, they drift without pilots. Their cargo is a portion of the sky that can’t be divided into portions.

Their cargo is the sky.

Up ahead, the river opens its wings. Lifts up, one long slow ripple. Around the next bend, the river does it again. The Great Blue Heron and we trade sightings this way for a while, the heron always ahead, we always behind.

Little flying river, we see you.

And the fish? Still taking their ease. To be inside a fish’s October dream — there are worse fates! The river whispers, rough as the heart’s blood. Everything’s in motion, everything’s in hush.

This river life, it goes on forever. It’s over in an instant.