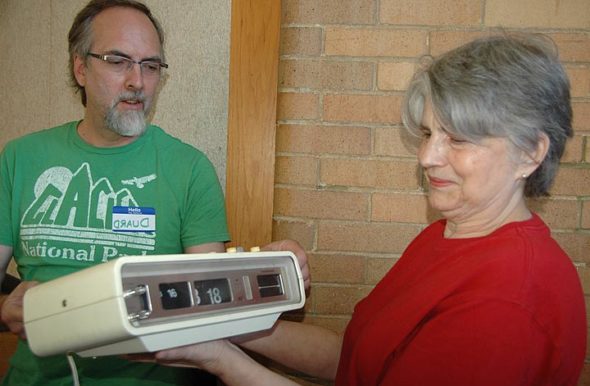 Deborah Dillon brought her “chirping” 46-year-old clock radio to last Saturday’s Repair Café, a free event for repairing household items such as clothing, furniture, lamps, computers and other small electronics. Duard Headley, also pictured, was one of the volunteer “fixers.” The Repair Café was organized by Kat Walter of YS Time Exchange. (Photo by Audrey Hackett)

At least two old radios turned up at last Saturday’s Repair Café. Deborah Dillon brought one, an early digital clock radio her brother had sent her from Japan in 1971.

The volume didn’t work, Dillon explained. Hadn’t for 15 years, but she didn’t want to part with the radio.

“It has a very unusual alarm,” she confided to this reporter. Rather than beeping, it chirped like a bird — a very determined, slightly demented bird.

Headley plugged it in, turned it on, noted that it was “roughly” tuned to WYSO, and fiddled with the volume. The sound went up, the sound went down.

Dillon seemed delighted. And so did Headley. It was easily the easiest “fix” of the afternoon.

Twenty-five people brought items ranging from laptops to old slippers to electric boot driers to the recent Repair Café at the Bryan Center, organized by the Yellow Springs Time Exchange. There were nine volunteer “fixers” on hand to help. Some items could be fixed, others were beyond repair. People swapped stories as well as fix-it tips, with some attendees lingering an hour or two beyond the actual repair just to chat. The event was free (donations accepted), and included snacks.

Saturday’s Repair Café was the second free local fix-it event organized by Kat Walter, a founder of both the YS Time Exchange and the YS Resilience Network. She came upon the concept online while researching community-based ways to reduce waste.

“It just seemed like such a good idea,” she said. Keeping “stuff” out of landfills and strengthening community connections are among her goals for the gathering.

Yellow Springs is the only Repair Café listed in Ohio, but interest is spreading. Attendees at Saturday’s event included an official from the city of Cincinnati’s recycling division and another observer from the Columbus area. Jennifer Ballard, the Cincinnati official, is planning a similar event in that city in March, and was looking for ideas.

“I loved seeing it in action,” she said Saturday.

Meanwhile, back at the repair tables, Nathaniel Rayford and Dave Turner were deep in conversation. Rayford had brought an old space heater for repair. The plug had melted. “I went to plug it in and the prongs broke off,” he explained. Turner, a retired engineer who has a repair business in town, was able to replace the plug and get the heater working again.

“I’m back in business,” Rayford exclaimed, with a broad smile.

Repair complete, the talk quickly turned to the topic of repair itself. Rayford recalled how people of his grandmother’s generation could fix anything.

“Every minute people were doing something. They never talked about boredom,” he said.

Turner called himself a born engineer. “I was never afraid to try to figure something out,” he said. And he maintained that fixing stuff isn’t as hard as many people assume.

“Most things are the same. Half the battle is getting whatever it is open,” he quipped.

Others at the event agreed that “fixing” is fast becoming a lost art. Sharon Mohler and Nancy Lineburgh volunteered their time to sew on buttons and make other small clothing repairs. As she waited for customers, Mohler, a local artist, was busy with her seam ripper and sewing machine, converting an old skirt into curtains. Many people today lack basic sewing skills, once a staple of girls’ education, Mohler noted.

But she appreciates computer help from the techno-savvy. Mohler is a member of the YS Time Exchange, in which people offer their services for free and bank hours to receive other free services in return. She is saving up her hours for computer assistance.

A computer conundrum brought Phyllis Logan to the Repair Café. Her old iPad, showing signs of heavy use, had broken, and she was hoping to retrieve pictures from it. She didn’t think she’d backed anything up.

“I’m not a good computer mother,” she confessed.

“It died on the table,” he said later.

Frank Blackstone’s item, an old eight-track player, met a kinder fate. A enthusiastic fixer himself, Blackstone brought in the requisite tools, and watched intently as Duard Headley opened the player and fished around inside. The two reminisced about eight-tracks, and old cars, and the pleasures of fixing.

“When I’m in a public building that has a loose door handle, I take my pocket tool out and tighten it,” Headley revealed.

Blackstone chuckled in recognition. Growing up in Dayton’s east end, fixing was a way of life, he said. “When you’re poor, you fix things.” Or at least, you try.

“Taking it apart is not the problem, putting it back together is!” he joked.

The enjoyment at the event was palpable. And that, according to Walter, is a big part of its value.

“Keeping stuff out of the landfill and reducing waste was my initial thought,” she said this week. While that remains an important impetus, another purpose has emerged. People share stories and skills and connect face to face. Some stay for the whole event.

The next Repair Café is planned for early 2018. Villagers interested in the YS Time Exchange can contact Walter at kat@volksmail.com or learn more at YSTimeExchange.org. An interest group for the local time exchange meets monthly at the Yellow Springs Community Library.

One Response to “Fixing up ‘stuff,’ building bonds”