This is the second in a two-part story on candidates for the three open seats on Village Council. Last week’s story profiled Taki Manolakos, Brian Housh and Crissy Cruz. Next week, the News will profile candidates for school board. 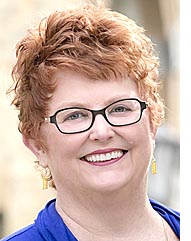 Having been in town almost a decade gives Lisa Kreeger a helpful perspective as a candidate for Village Council, she believes.

Kreeger first thought about running for Council even before she moved to the village. At the time, she and her husband, Todd, were living in the Seattle area but looking to move to a small midwestern town. The couple knew of Yellow Springs through Lisa’s work on her Ph.D. in Leadership and Change from Antioch University, during which she visited town. From Seattle, Lisa kept an eye on local issues and events, impressed by the high level of community engagement.

“There were amazing opportunities for citizens to get involved,” she said.

After they did move to Yellow Springs, Kreeger’s job as a nursing consultant required extensive travel, making a Council run impossible. But in the last year she’s made a career change that keeps her in town, so that the timing seems right to Kreeger.

Kreeger would bring to the job more than a fresh eye, she believes. As a registered nurse and a “people person,” she feels comfortable with the human side of issues, yet has also worked in the corporate world. It’s a combination she believes can be useful and unique.

“I’m not afraid of the business side of things, but also engaged socially. I’m a business person and a humanist,” she said.

Kreeger’s business experience would give her an eye for the bottom line, she said, and one of her first jobs would be to scrutinize Village spending.

“We need to make sure our budget choices reflect who we are as a community,” she said.

Regarding finances, she’d like to see the Village expand its business and tax base, and would especially encourage efforts to bring more minority-owned businesses to Yellow Springs.

“We need to attract more revenue,” she said.

Closely connected to Kreeger’s emphasis on finances is her concern about affordability.

“We’re not making progress as fast as we need to,” she said, regarding affordability.

Kreeger believes Council needs to keep the issue in the limelight, always asking how each Council decision affects the local cost of living. And she’d like to see Council work creatively with local groups such as Home, Inc. and the Community Foundation to address the issue of the high cost of living in the village.

“It’s an opportunity for Council to consider more innovative ways to work with local nonprofits,” she said.

Strengthening Council’s collaborations with nonprofits and educational institutions would be a priority for Kreeger regarding all issues, not just affordability.

“These key stakeholders all play a part in village life,” she said.

The third component of Kreeger’s platform, inclusion, is linked to her concern over the changes she’s seen in the village even in the nine years since she moved here, as the village demographic has become older and whiter, a shift she finds troubling.

She supports efforts from The 365 Project to work with local Realtors to reach out to clients of color, and believes that such proactive efforts are needed. She views the issue as linked to the local cost of living, and believes that “at the end of the day, the real solution has to be to get to affordability.”

Born and raised in San Diego, Kreeger and her husband raised their two children in Seattle. Trained as a registered nurse, Kreeger spent many years working in pediatric intensive care. Later, she worked for IBM in that company’s efforts to partner with health care businesses. After getting her doctorate from Antioch University, Kreeger launched her own consulting business, but last year she shifted back to academia, and is now a nursing professor for Capella University.

Since moving to Yellow Springs, Kreeger has been active in the World House Choir, Village Mediation, the Community Foundation and Community Chorus.

And the move did not disappoint.

“Yellow Springs has lived up to all we hoped it would be,” Kreeger said. 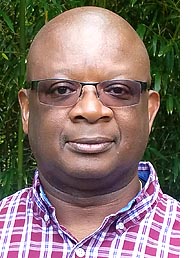 Kevin Stokes first began thinking of running for local office after President Obama’s farewell address in which he encouraged Americans to make a difference by running for local office. But he didn’t feel quite ready to jump into a race until he found that two-term Council member Gerald Simms, who is African American, wouldn’t be running again.

“He was the only person of color on Council,” Stokes said. “I felt an obligation. My heart strings were tugged.”

If the village wants to be known as a town that celebrates diversity, its governing body should have a diverse make-up, Stokes believes. And while being African American means he has a sensitivity to issues of race, he also brings other attributes to the table.

“Just showing up black doesn’t fix the problem,” he said.

Overall, he said, he has a passion for making life better for those who live in Yellow Springs.

“I’m a leader with a heart for service,” he said.

Regarding diversity, Stokes said, if the village wants to value inclusiveness, “We need to behave in an inclusive manner.”

One aspect of that behavior involves taking seriously the concerns of young people of color regarding past harsh treatment by police. While he’s pleased overall with the changes made by new Chief Brian Carlson, Stokes believes there’s room for more police training in implicit bias, and not just for the police department, but the whole community.

Stokes identifies three pillars for his campaign: along with a sensitivity to issues of race and culture, the issues are economic development and sustainability; and the need for collaboration between the village and Antioch College.

Regarding economic development, Stokes believes that the Village-owned CBE land offers a good opportunity for new manufacturing or research businesses to come to town. And to attract new business, he would like to see the Village create a municipal broadband network.

While Council in recent months declined to construct a broadband network following a study that emphasized the financial challenges of creating a network, Stokes would have taken another approach to the issue.

“I would have liked to approach the issue with, ‘we want broadband, how do we make it happen,’” rather than a study based on the challenges, he said.

Stokes, who is the director of information technology and media services for Antioch College, is at home with technology. As a college employee, Stokes is especially keen to strengthen the town/gown relationship, which he believes strongly benefits both entities.

One way the college could benefit the village would be to share some of its fiber network. Stokes is also excited about possibilities of collaboration around housing, especially with the proposed Antioch College Village. And the whole community benefits from collaboration around the Foundry Theater, a performance space used by college and village alike.

“We need to look for opportunities for the college and community to work together,” he said.

A village resident for three-and-a-half years, Stokes is relatively new to the community. But he feels more like a villager than that time span suggests, as he and his wife, Karen Gardner, a longtime village resident, have been making long visits to town ever since they married and moved to Orlando, Fla., in 2005.

Raised in Dayton, Stokes attended Michigan State University, then graduated from Ohio State with a degree in computer information systems. He later turned to teaching after getting a master’s in education from the University of Dayton (where he met Gardner), after which he taught special needs students. He moved from Dayton to Florida, where he worked for Orange County schools. And in Florida, he jokes, Gardner wanted to move back to Yellow Springs for seven-and-a-half of the eight years they lived there.

As the Council candidate with the shortest tenure in the village, Stokes believes he holds a helpful vision based on the present, not the past. 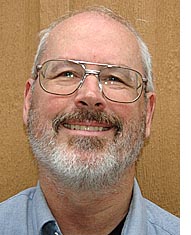 An electrical engineer, David Turner retired from YSI about 15 years ago when his two boys were young, so his wife could attend graduate school. After a few years at home, Turner decided to launch a business doing what he loves to do — fixing things.

Years later, Turner is still fixing the broken down appliances of Yellow Springs.

“If you count up the computers, refrigerators and washing machines that I’ve convinced people not to throw away, there would be hundreds, maybe thousands,” he said.

Turner’s impulse behind running his business is similar to his impulse to run for Village Council, he said.

“I like to solve problems, and I’m good at it,” he said in a recent interview.

Along with his propensity for solving problems, Turner also believes his business keeps him informed about local concerns.

“I have a lot of knowledge about the community and its issues,” he said. “I know a lot of people and they know me.”

Working with technology has taught him patience, Turner said, and he also believes he’s a good listener. And while he’d bring those listening skills to Council, he would also bring a desire to move forward on issues.

“I think listening is important but if all you do is listen, you just hear the same things,” he said.

The need for economic growth is one of the most important issues facing the Village, Turner believes. And while Council’s role should be mainly advisory, he believes that Council can help promote growth by clarifying what sort of economic growth the village desires.

“A lot of the jobs and businesses that were in town 50 or 60 years ago aren’t here anymore, and they’re not coming back,” he said, referring to manufacturing firms such as Vernay Laboratories. “If we bring the right kind of businesses to town, everyone wins, but we have to figure out what those businesses are.”

Affordability is also a pressing current issue, Turner believes, and he sees economic growth as the best route for helping to make Yellow Springs more affordable. Most important, he wants people to work together to solve problems rather than just complain.

“Throwing up our arms and saying, ‘Isn’t it awful’ isn’t a solution to the problem,” he said.

Also contributing to the problem of affordability is rising housing costs, he believes. But the rising costs reflect the village’s popularity, as a town where people want to live.

Turner believes he knows why people want to live here. When he brought his mother here years ago, after she began showing signs of dementia, people pitched in to help make a difficult situation more bearable.

“Everyone conspired to help us,” he said. “It was a community event. This is a town full of caring people.”

Turner was born and raised in Worthington, Ohio, always knowing he wanted to be an engineer. But after one year at Ohio University, he joined the Coast Guard, where he served for four years. There, he learned lifelong lessons about the power of a small group of people facing problems together.

“It’s powerful to work with people like that,” he said.

Next, Turner returned to Ohio and received his engineering degree from Ohio State University. At a protest against nuclear power, he met Deb Downey, his future wife. When after graduation he was offered a job at Mead Corporation in Dayton, the couple moved to the area, later settling in Yellow Springs when he began working at YSI. The couple has two sons, Alex and Will.

While the boys are now grown and out of the house, Turner continues his repair business because he finds it fulfilling.