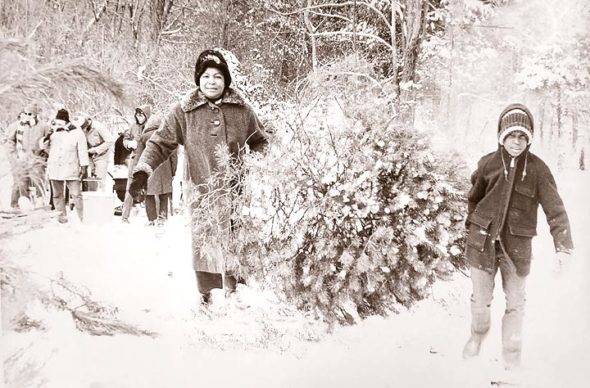 A Yellow Springs News photo from December 1973 shows resident Ethel Bender and her son, Michael, with the Christmas tree they selected at that year’s School Forest Festival. (Photo courtesy of Scott Sanders, Antiochiana)

“I think your plan for Christmas tree planting and harvesting is a fine one.”

So wrote Herbert Hoover, then U.S. secretary of commerce, in response to a Dec. 2, 1925, letter from then Antioch College President Arthur Morgan.

Morgan had written the nation’s future president in support of an idea put forward by Antioch biology Professor Theodore Laist.

Laist’s Christmas tree plan — his goal being to promote interest in forestry and conservation among school-age youth across the country — was a precursor to the local effort that came to be known as School Forest.

The two-day event, typically held the second weekend in December, welcomes community members to a designated grove of young pine trees on Bryan Park Road, adjacent to John Bryan State Park, to choose and cut their own Christmas tree. Festivities include hay rides, hot chocolate, cookies and an occasional visit from Santa Claus.

This year’s event is Saturday and Sunday, Dec. 9 and 10, from 9 a.m. to 3 p.m. both days, when high-schoolers will be on hand to assist in tree selection and cutting.

The most public of the group’s activities, the festival is actually the culmination of a year’s worth of work that includes planting seedlings in the spring and maintenance year round.

“I would say in all the seasons except winter, the main activity is weed whacking,” said high school history teacher John Day, who has served as School Forest club advisor for 25 years.
Weed whacking is vitally necessary, said club member Aza Hurwitz, “especially for the baby trees, because the grass will grow and engulf them.”

Hurwitz, a senior, is part of the group’s core leadership team known as the Ossifers. Several Ossifers as well as other members of the club, met in Day’s classroom during lunch one day last week to prepare fliers advertising this year’s festival and talk about the organization.

Bledsoe likened the tool to “a golf club with a big razor” that you swing back and forth.
A lot of people power is needed to keep up with the chore.

About 40 students are participating in this year’s efforts, Day said, with the group typically pulling in between 30 to 40 each year.

“The biggest and the coolest,” Lawson added. “It’s a proven fact.”

In recent years, the group has planted 250 seedlings in late spring.

“It used to be more,” Day noted, but the addition of other tree businesses in the area has thinned the customer base over time.

The seedlings come with their roots covered in a thick “goop,” which the students said also serves as a source of amusement when “put on other people.”

In addition to weed whacking, ongoing chores include pruning — “they’re shaped so they look like a Christmas tree,” Day said — and caterpillar squishing.

The caterpillars will eat the pine needles if left to their own devices, the students said. Squishing them, which is accomplished by pinching the pests between the index finger and thumb, is gross, but can also be quite satisfying, the students agreed.

“The job everybody loves is chopping down dead trees,” Day said, with a trace of surprised amusement in his voice. “Everybody loves the lumberjack kind of jobs.”

“We get to use dangerous tools we’re not normally allowed to use,” Lawson said.

But School Forest isn’t all tree maintenance. The group has a campout in the early fall and also goes on a camping trip in the spring.

Camping out during the December festival weekend is also a major component. Often, students sleep around the fire, “under the stars.”

Bledsoe recounted waking up one year with “an inch of snow on my face. It was wonderful.”
The students also remembered a year when it rained so long and hard, Connor Gravely-Novello, now graduated, shoveled water out of the fire pit so they could have their traditional bonfire.
“We always have a big fire,” senior Peter Day said.

The group also has a large teepee, given to it in the 1970s and permanently located at the Bryon Road site, which it continues to use for storing supplies and sleeping during the festival.

Teacher Day said that he became School Forest advisor after coming to Yellow Springs in January 1993.

“It’s been my greatest joy of teaching,” he said. “The students who do School Forest are great fun.”

In preparing for this year’s 70th annual outing, Day has researched the history of the event, digging into Antioch College and high school records and scouring old high school year books.
He found the 1925 letter Arthur Morgan wrote to Herbert Hoover and a student paper written in 1956 by an Antioch undergrad who had interviewed Morgan and quoted Hoover’s reply.

He also tracked down 93-year-old Alan Woog, now living on the West coast, who as a graduate student with a fellowship at Antioch, teamed up with then Glen Helen Director Ken Hunt to start the School Forest high school program in 1948.

The idea first presented by Professor Theodore Laist in the 1920s resulted in the student-powered planting of Glen Helen’s Pine Forest, but did not develop into a sustained activity.
The 1948 effort pulled in the high school’s student council, according to Day, and Yellow Springs News clippings from the first year describe a successful event with more than 400 people attending the festivities. School Forest was launched.

In going through yearbooks, Day determined that the effort became a separate, standing club about 1960.

“It’s been a continuous group here at the high school growing Christmas trees ever since,” Day said.

And even in the few years in which weather, deer or pests — or a combination of the three — wiped out salable trees, the festival was held and the work continued.

In looking at photos of festivals held over the years since 1948, the current students noted how familiar the images looked and the similarity to their own experiences of tending the trees, camping out and enjoying their time together.

“A lot of the traditions are still the same,” Day said.