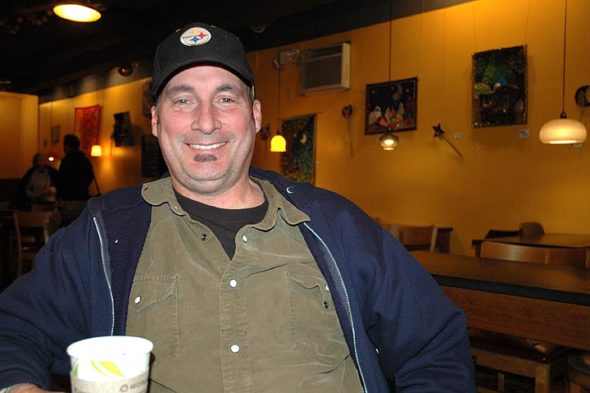 Terry Fox, auctioneer and owner of Atomic Fox, which specializes in selling mid-20th-century furniture and décor, has closed his Dayton Street retail store to focus on his growing business in the online market. (Photo by Carol Simmons)

The nearly empty storefront on Dayton Street doesn’t mean that Atomic Fox, the retro furniture and décor shop that has occupied the space for nearly three years, is going out of business. It does mean, however, that the business is transitioning.

With the recent acquisition of a 5,800-square-foot warehouse in Jeffersonville, owner Terry Fox has closed the brick and mortar part of his enterprise and moved to an online model, utilizing such websites as Facebook and Etsy as well as internet auction platforms, including eBay.

“I feel that online sales are the direction to go — at least for our business,” Fox said in a recent interview. “Twenty- or 30-year-olds want to sit and watch Netflix and buy or bid on their phone.”

The online sales model is not new for Fox. That’s where he focused his business before opening his first physical store in Yellow Springs more than four years ago. And he continued to develop his online presence while maintaining the local shop.

Fox, who’ll turn 50 in February, said the store did well enough, but as the online side of Atomic Fox grew, it took more of his time. He was working 60- to 70-hour weeks all told, and that wasn’t personally sustainable, he said. He especially wanted to reclaim  time for his wife and two daughters, 11 and 13.

“I’m not going to sacrifice their childhood for 10- and 12-hour work days,” he said.

The half-hour one-way commute from his home near the Springfield airport is a new experience — “I’ve always worked five to 10 minutes from my work,” he said   — but he’s already seeing an overall reduction in his time on the job.

The new warehouse also more than doubles his previous space, allowing him to store — and offer for sale — more of the mid-20th century household pieces he loves.

In addition to online sales and auctions, Fox also conducts live auctions, having completed training at the Ohio Auction School in Groveport and becoming certified in 2013.

“It was something I always thought about as a kid,” Fox said of becoming an auctioneer. “I thought you just had to talk fast.”

But he learned there was more to it than that.

“You have to learn about what you’re selling.” The more you know about the items — their history as well as their worth — the more effective you are.

You also have to be trustworthy, he said.

“The heart of being a good auctioneer is [having] a good character,” Fox said.

He said he’s seen some shady practices, such as “shill bidding,” where acquaintances of the seller bid on an item to increase its price or desirability, and “ghost bidding,” where an unscrupulous auctioneer points to a nonexistent bidder to artificially inflate the price. He shook his head in disdain of such practices.

He said he’s conducted about 10 live auctions in the back room of his Dayton Street store, and will continue at the new warehouse. He also contracts with individuals and families who are liquidating estates or downsizing, offering a range of options, from buying household items outright for later resale, to posting goods to auction sites, to conducting a live auction at the customer’s house or farm.

Although he had personal and professional reasons for closing the Yellow Springs store, Fox said the decision wasn’t easy.

“It’s bittersweet,” he said, noting that he had a small group of patrons who came by regularly to check out new merchandise. “The thing I’m going to miss most is those relationships.”

While Fox is losing those in-person connections, he is also leaving having increased the size of his online community.