Bringing nature home, a yard at a time 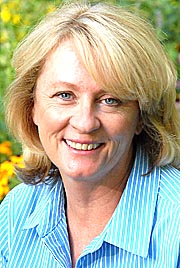 How many bluebirds, woodpeckers, butterflies and bumblebees can your backyard support? If it’s mostly lawn, the answer is: not many.

But planted with native trees, shrubs, grasses and flowering plants, your yard can be a habitat for local wildlife and improve the health of the local ecosystem, according to a 2016 film to be screened in Yellow Springs this weekend.

Directed and produced by local resident Catherine Zimmerman, “Hometown Habitat: Stories of Bringing Nature Home,” documents the efforts of “habitat heroes” around the country to re-plant native species, which attract pollinators and provide a variety of ecosystem services we rely on to live.

Zimmerman will present her documentary at 4 p.m. on Sunday, Dec. 3, at the Little Art Theatre. The event costs $5 and is co-hosted by local conservation group Tecumseh Land Trust and the Unitarian Universalist Church of Yellow Springs, which has organized climate change book discussions. Zimmerman will speak following the 90-minute film and provide a list of the most beneficial local native plant species.

In an interview this week, Zimmerman said the film shows how to improve one’s ecosystem rather than harming it with common landscaping practices such as planting invasive and non-native ornamental species, which is “the norm.” The film also offers hope for positive environmental change, she said.

“Often people see environmental problems and don’t think they can do anything, but if you just start locally it’s amazing how, cumulatively, we can make an impact — one yard at a time,” Zimmerman said.

Zimmerman herself went from self-anointed “Queen of the Lawn” 20 years ago to a native plant enthusiast after she realized she had driven away the fireflies from her Maryland home. After three years of “bombarding” the yard with pesticides, the fireflies, which used to light up “like it was Christmas,” completely disappeared, she said. She never used pesticides again.

“I wasn’t doing something intentionally bad, I just didn’t know,” Zimmerman said.
After that experience, Zimmerman went back to school to study horticulture and got certified in organic land care. More recently she decided to use her decades of filmmaking expertise to spread the message about native planting, which is now her passion.

“I wanted to educate people about how ecosystems work and how we can play a part in making them healthy rather than destroying them, which is what we have been doing,” Zimmerman said.

Ditching the lawn
Lawn covers more than 40,000 square miles of the U.S., which means three times as many acres are planted in lawns as in irrigated corn, according a 2005 study published in Environmental Management.

But turf grass and ornamental plants— 80 percent of which come from Asia — can’t contribute to the local food web in the same way native plants can, since local insect and bird species are specially adapted to native plants, not these outsiders, according to Dr. Doug Tallamay, a well-known entomologist featured in the film. A diversity of species also supports more wildlife.

For example, Tallamay explained, chickadees need to gather from 390 to 570 caterpillars per day for 16 to 18 days to raise one clutch of fledglings. Conventional lawn grass can’t support the quantity or the diversity of insects that many birds need, he said. With non-native plantings, “you have clobbered the food web in your neighborhood,” Tallamy said.

Tallamay also suggested that nature preserves are not enough — instead everyone should be creating habitat on their properties.

“If we save five percent of the land for pristine habitat, we save five percent of the species, and that’s not enough to run the ecosystem services we depend upon,” he said. Among those ecosystem services are the pollination of crops and other plants, cleaning and filtering pollutants from the air and water, buffering extreme weather, holding soil and water in place and capturing carbon dioxide, according to the film.

When Zimmerman persuades homeowners “to give up part of their lawn,” she advises them to start small and be patient, she said. She encourages people to think of using turf grass only for paths and walkways, and to make sure they prepare the site properly so weeds don’t proliferate.

Mostly, though, Zimmerman emphasizes the benefits of native plantings. For example, once established, a meadow only needs to be cut down once per year, she said. From another perspective, native landscapes are also far more “productive” than the usual alternative.

“I try to get them excited about what wildlife they are going to have in their backyard. Lawn is the most unproductive plant — it’s value is mainly that you can walk on it,” Zimmerman said.

Zimmerman lived in Yellow Springs while a photography student at Wright State University in the early 1970s and returned in May after decades on the East Coast. She is the sister of longtime villager and owner of the former jewelry store Rita Caz, Gail Zimmerman. Catherine Zimmerman is already making landscaping plans for her new home on North Walnut Street.

“I’m turning the front yard into a meadow garden,” she said.

Local efforts, resources
The film screening is only the latest local effort to promote habitat restoration and native plants, according to Krista Magaw, director of the Tecumseh Land Trust. While the land trust mainly holds and monitors conservation easements on large properties, they are also interested in conservation practices more generally, which is why they are co-hosting the screening.

“We want to promote the idea that there are better ways to do conservation, even in your own backyard,” Magaw said. “Most people will not own a nature estate or a farm, but there is so much they can do.”

Towards that end, Tecumseh Land Trust is organizing a native plant swap and sale for Earth Day 2018. They also helped secure funding to restore a section of the Village-owned Glass Farm to a natural habitat and wetland, a section of which had become overrun with invasive Callery pear trees. And the land trust, with its recent Jacoby Creek Partnership grant proposal, hopes to “create a network among the landowners to showcase what people are doing on their properties,” with potentially $300,000 over five years to restore the watershed with native plants and trees, Magaw said.

“It’s education by example,” she said.

Another promising local effort Magaw cited is the Bluebird Project, spearheaded by McKinney Middle School science teacher Rebecca Eastman, in which students build and monitor bluebird boxes to create friendly habits for the birds. Tours of local gardens in recent years have featured prominent local pollinator gardens, such as the one created by Macy Reynolds at her Orton Road home, she said. The Women’s Park along the bike path features a stunning pollinator garden. And the Glen Helen Ecology Institute has led numerous efforts to reduce the invasive species and promote native plantings within the village, which supports biodiversity in the Glen.

In addition, local garden designer Nadia Malarkey started the Pollinator Restoration Project in Yellow Springs in 2014, and plans to revitalize the project with a public talk this winter on the benefits of increasing the habitat for pollinators here, especially native bumblebees, which she said are “terribly at risk.”

“It’s all about increasing biodiversity within the garden,” Malarkey said. “When you begin with regenerating habitat at the base of the food chain, once you heal that level everything else begins to fall into place.”

In Malarkey’s vision, after villagers learn to restore their properties they can become the ambassadors for their neighborhoods and inspire others. It’s a community-based approach that Zimmerman found everywhere she filmed.

“This sense of community was at the core of all of the success stories,” Zimmerman said.

Film stories
“Hometown Habitat” features stories of environmentalists, educators, foresters, church leaders, neighbors, homeowners and youth around the country making a difference in their local ecosystems. So far the film has been screened over 200 times and seen by thousands of people from California to Kentucky, Zimmerman said.

Focusing on urban and suburban areas, and featuring landscapes as small as 10×10 feet, the film highlights the street tree-planting efforts of the Million Trees NYC initiative, a conservation housing development in Illinois, environmental education in Toledo, an interfaith environmental movement focused on churches, the efforts of the natural landscaping group Wild Ones, an “eco-artist” in Florida, and the Habitat Heroes program in the Rocky Mountain area.

The film also lays out the benefits of native plants without dwelling on the environmental damage conventional landscaping practices have caused. Zimmerman, who has made numerous environmental films, including documentaries for CNN on global warming, wanted this film to focus on the positive.

“I wanted to show examples where people feel empowered, and come together at the community level,” she said.

For more information on the film and resources on native plants, visit: themeadowproject.com.