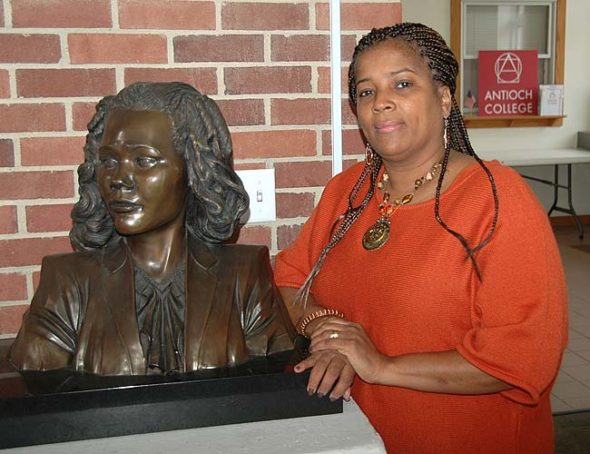 “Nonviolence is a way of life for courageous people.”

The first of six principles distilled from the writings of the Rev. Dr. Martin Luther King Jr. establishes the foundational precepts of King’s philosophy of nonviolence.

It’s a way of life — not a singular act or merely a tactic. And it’s not easy or without risk. Courage is required.

Those were just some of the lessons offered as part of a two-day training in Kingian nonviolence conflict resolution conducted Friday and Saturday, Dec. 1–2, at the Coretta Scott King Center at Antioch College.

Leading the sessions were Mila Cooper, executive director of the Coretta Scott King Center, and Connie Blunden, director of the Center for Public Purpose at Greenwich Academy in Greenwich, Conn. Both are certified Kingian nonviolence trainers.

Attending was a group of mostly students joined by an Antioch employee, a former faculty member and a village resident.

The life experiences and perspectives were wide, and not everyone came convinced that nonviolence was a viable approach for contemporary ills.

“If Nazis are marching down my street, why shouldn’t I fight back?” one student asked.

The question seemed to resonate with the students, some of whom expressed their continuing concerns about white nationalist fliers posted near campus earlier this school year and stories of a group of people wearing shirts bearing purported white-nationalist insignia and drinking unchallenged at a local business.

The training not only offered an alternative to fighting back, but also provided a philosophical rationale, supported by historical precedent, for engaging in nonviolence.
The format included group discussions, small group break-outs and self-reflections.

The curriculum was designed by Bernard LaFayette Jr., who worked with King and co-founded the Nonviolent Coordinating Committee, or SNCC, in 1960, and social change activist and educator David Jehnsen, who founded the Institute for Human Rights and Responsibilities in 1978.

The six principles of Kingian nonviolence sometimes appear with slightly different wording in different sources, but the heart of the ideals remain the same regardless of the context.

As shared in the LaFayette/Jehnsen curriculum, the additional five are:
• “The Beloved Community is the framework for the future.”
• “Attack forces of evil, not persons doing evil.
• “Accept suffering without retaliation for the sake of the cause to achieve the goal.”
• “Avoid internal violence of the spirit as well as external physical violence.”
• “The universe is on the side of justice.”

Cooper told the group that conflict between people, groups and nations is a constant. “Conflict is normal,” she said.

Problems arise, Blunden added, when conflict escalates to acts of violence. Nonviolent approaches will differ depending on the level of conflict — the goal always being to bring those involved to a place of negotiation, Cooper said.

Blunden noted that many people, including herself, find it easier to define violence than to describe the attributes of nonviolence, possibly because violence is so prevalent in our society.

“Our culture not only supports violence, but celebrates it,” one participant noted.

Cooper and Blunden stressed that violence and nonviolence are not opposites. Nonviolence is not simply the absence of violence; it is an active state of being that promotes justice and equality, they said.

“Acting from a place of love,” is necessary, Cooper said. And may be one of the hardest things about the Kingian philosophy.

The gathered group particularly grappled with the Kingian call to “attack forces of evil, not persons doing evil.”

Accountability arose as a special concern. “Is there a way for holding people accountable for their actions without violence?” was a question that arose from one break-out group.

Cooper reminded the participants of the principle concerning the “Beloved Community,” which seeks relationships and reconciliation, rather than retribution. Retaliatory acts that feel good in the heat of the moment only serve to continue the violence, and rarely — if ever — achieve desirable long-term results.

The facilitators took time to explore some of King’s writings, including his “Letter from Birmingham Jail,” as well as the influences that helped form his nonviolent philosophy — Gandhi, Thoreau and Hegel, among others.

And four historical moments in King’s life were offered as examples of his philosophy in action: the Montgomery bus boycott in 1955; the Freedom Rides of 1961; the Birmingham anti-segregation actions, including the Children’s Crusade, in 1963; and the Selma voting rights marches in 1965.

The training concluded with an evaluation form that asked participants to consider how they might use what they learned going forward.

Some of the students, who took the training as part of a one-credit class this semester, will be identifying issues and nonviolent actions to address them.

Antioch employee Kevin Stokes, who was recently elected to Yellow Springs Village Council, said he signed up for the training before the election because he was personally interested in it. But he also thinks that having the information will be helpful in his Village work.
Former faculty member Gabrielle Civil said that the lessons will stick with her.

“It was truly a powerful experience,” she wrote in an email afterward.

Cooper has said she hopes to offer more such trainings at the Coretta Scott King Center in the future.