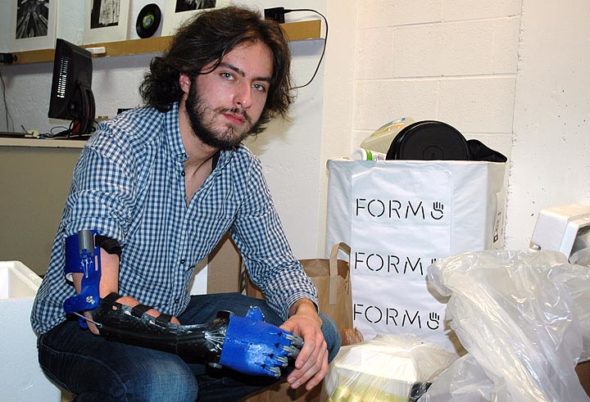 First-year Antioch College student Aaron Westbrook is the founder and CEO of Form5 Prosthetics, a company that makes prosthetic limbs, like the one he’s wearing, from recycled plastic. Westbrook is pictured in his lab space at Antioch with some of the plastic he collected from the local community during a recent plastics drive. (Photo by Audrey Hackett)

‘One man, one hand’ at Antioch

Enter Aaron Westbrook’s lab at Antioch College, and the first thing you’ll see is a table full of arms and hands.

Prosthetic arms and hands, of different sizes, shapes and colors — some of the many dozen “helper hands” Westbrook has designed and fabricated over the past several years. And used.

Westbrook, a first-year Antioch student from the Columbus area, was born with one hand. He sometimes uses a prosthetic, but is comfortable, and highly dexterous, without such aids. When he learned to tie his shoes, in sixth grade, he posted his achievement on Facebook.

“I can do everything with one hand,” he said in a recent interview. “Just differently and in my own way.”

In fact, Westbrook has done something most people never do. While still in high school, he started his own company, Form5 Prosthetics. The firm makes prosthetics from recycled plastics and provides them free of charge to individuals with “limb difference,” the preferred term for those missing all or part of a limb, whether through a birth defect or later amputation.

Westbrook’s company has made prosthetic arms for three recipients so far, all of them children. He uses open-source designs available for free through the online community e-NABLE, customizes them to the individual and intended use, then fabricates the limb from recycled plastics using a 3-D printer. The resulting prosthetic is fitted to a person’s partial arm, and operated using elbow movement, which opens and closes the prosthetic hand.

Form5 secured nonprofit status this fall, and now has a board of directors. Westbrook remains the CEO and sole employee.

He’s been written up in Fast Company, the Columbus Dispatch and elsewhere. He’s given a TEDx Talk. Two years ago, on his 16th birthday, he appeared on TV.

“I never expected any of this,” he said.

In his own way

A 2017 graduate of New Albany High School outside Columbus, Westbrook started at Antioch this fall. He wanted to grow his company, as well as continue his education — but in his own way. At Antioch, he’s pursuing a self-designed major in “eco-friendly digital fabrication.” The college is giving him latitude and lab space. And it has offered support in other ways.

In November, he launched a campuswide plastics drive to source his raw material — #5, #6 and #7 plastics, otherwise non-recyclable in our area. The drive was integrated into his Global Seminar class, giving Westbrook a chance to share his expertise in plastic recycling with other students.

“Students were interested, engaged and supportive of his work,” according to Antioch faculty member Beth Bridgeman, who leads the class.

The greatest response to the plastics drive has come from the Yellow Springs community. The recycling box at the Wellness Center, used mostly by community members, has been full-to-overflowing “about every four days,” according to Westbrook. Through the drive, he’s gathered hundreds of plastic cups and containers. He washes them himself in the college kitchen at North Hall.

The plastics drive wraps up this week, but he plans a second, larger one in January. Also next month, reflecting its new nonprofit status, Form5 will be geared up to accept donations.

Westbrook’s venture has come a long way in just a few years.

As a kid, he never wore a prosthetic. He just wasn’t interested, he said. But when he entered high school, he decided to try one. His first prosthetic, fitted by doctors at Shriners Hospital in Lexington, Ky., was a clunky, heavy device formed to look like an actual arm. He struggled to adapt, wearing it one week, going without it the next. Eventually, “it lived in my closet,” he said.

His personal difficulties led to a revelation.

“I thought, ‘I’m not the only person struggling through this process,’” he said.

In fact, many people have a hard time adapting to a prosthetic, especially those starting the process after childhood, according to Westbrook. Add to that the barrier of cost. Traditional prosthetics cost between $40,000 and $60,000, though in Westbrook’s case the device was covered by his family’s health insurance.

But technology is changing the picture. Growing up, Westbrook only knew two individuals with limb difference, but as a young adult, he began writing about his experiences online, connecting with a  worldwide community of people with limb difference. And from that community, he learned that people were pioneering a new kind of prosthetic limb using 3-D printing, a faster and far cheaper “do-it-yourself” method. Around the same time, his high school opened up a maker space, called a “fab lab,” which included 3-D printers, devices that are programmed to create solid, three-dimensional forms.

He spent his sophomore year experimenting with the new technology, learning enough to strike out on his own. He raised $2,400 on the online fundraising platform Kickstarter in the spring of 2015, using the money to purchase his own 3-D printer.

By the time senior year rolled around, he’d learned 3-D printing, collaborated with various creators of open-source prosthetic designs online, formed his own company and set himself an ambitious goal: to create a prosthetic using recycled plastic, rather than conventional plastic filament, which he considered wasteful. And the prosthetic would be for someone else — a functional device that a person could use in their everyday life.

That goal became the focus of his senior project. Last year, he collected and sanitized 2,000 plastic cups and many thousands of plastic lids from his school’s coffee shop. He figured out how to turn them first into plastic “mulch,” then into long strands of plastic filament, the material that gets fed into a 3-D printer. He secured a donation of a filament extruder, a specialized machine, from a company called Filabot. When the extruder broke, he finagled another one.

By the end of his senior year, he had created his first arm for a recipient, a little girl named Maddie. Because of technical difficulties, her prosthetic wasn’t made from recycled material, but his next two arms were.

This fall, he made a “cello arm” for Tate, whose family lives in Worthington, Ohio. Tate, 11, has limb difference, but doesn’t generally use a prosthetic, according to his mom, Patti Simmons, by phone this week. Tate already plays drums and the guitar, but wanted to learn the cello and needed a prosthetic to hold and maneuver the bow.

She reached out to Westbrook, whom she knew through a support group she’d founded, called the Nub Club of Central Ohio. He was excited to help.

The arm he fabricated has worked well, despite a few hitches that Westbrook is addressing in a second, tweaked version of the prosthetic. Even more powerful than the functionality of the limb is Westbrook’s enthusiastic, can-do approach, according to Simmons.

“I love that he’s inspiring kids with limb difference to see that they can solve their own problems,” she said.

Back at Antioch, second-year student Ben Zitsman said Westbrook stands out at the college for his entrepreneurial focus and drive.

“I’ve never encountered anyone at Antioch with such an acute sense of purpose, let alone with such clarity-of-vision in realizing it,” Zitsman wrote in an email.

As our interview came to a close, Westbrook got up to check the progress of his 3-D printer, which had been humming along in the background. The printer was creating Form5 keychains for the company’s new board of directors. As the printer lay down layer after layer of plastic, the Form5 logo gradually emerged: a small stylized hand.

But already that’s changing. With the addition of a board and a slate of new recipients, from Ohio and beyond, lined up for the new year, the company is poised to grow from a one-handed operation to one with many helping hands.

One Response to “‘One man, one hand’ at Antioch”