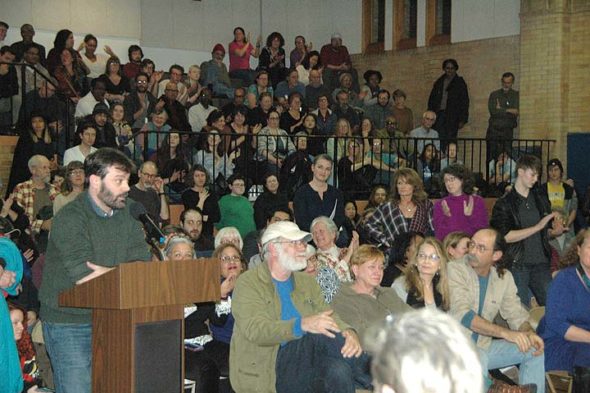 More than 250 villagers crowded into the Bryan Center gym Jan. 3 for a special Council meeting about tensions with police at the New Year’s Eve Ball Drop. About 40 people spoke, including Ian MacDonald, above. (Photo by Dylan Taylor-Lehman)

2017 started out with a bang in Yellow Springs, when a beloved New Year’s Eve event turned ugly. Police on duty attempted to disperse the crowd by driving through it, with lights flashing and sirens blaring, after which two young men, one African-American, had either been tased or threatened with tasing. At the end of the event, David Carlson, a former resident, had been charged with a felony for obstructing official business, and Village Council member Marianne MacQueen was cited for a misdemeanor for the same offense. 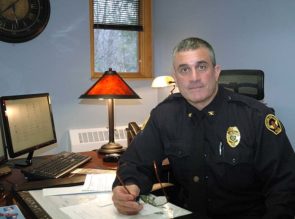 In response to what many perceived as overly aggressive and hostile actions by police, many villagers rose up in protest to the event, setting the stage for a year of substantial changes to local policing. By Dec. 2017,  a new police chief was leading a far more progressive and community-minded department.

Several days following the New Year’s event, more than 250 villagers spilled over available seats in the John Bryan Center gym to express their dismay about officers’ behavior on New Year’s Eve. At the event, Police Chief David Hale announced his resignation in a written statement, acknowledging that the four officers involved had used “extremely poor tactics” during the incident. And during the meeting Village manager Patti Bates announced that a Dayton attorney, David Williamson, had been hired to conduct an independent investigation of the New Year’s Eve event.

Throughout the winter and spring villagers who had been concerned in recent years about a disconnect between local police and the community doubled down to respond to the opportunity to improve local policing. Groups like The 365 Project, the Human Relations Commission and the Council-appointed Justice System Task Force, or JSTF, worked to create new guidelines for more progressive policing.

In a 22-page report released early March, the independent investigation of the NYE event led by Attorney Williamson concluded that local police had created a “volatile and unsafe situation” with their tactics.

In March, Village Council affirmed recommendations from The 365 Project and the Justice System Task Force regarding taser use, clarifying that tasers are only to be used to protect life or prevent serious injury, and not for compliance. The citizen groups also recommended that all police receive crisis-intervention, or CIT, training, that the department provide implicit bias training, that the local Mayor’s Court be used more effectively and that the department hire a social worker.

Council throughout the winter and spring engaged with citizens to decide how best to select the next police chief, with some advocating for a national search and others promoting a local process. In May, Council agreed to restrict the search to local candidates, after which Interim Chief Carlson, Officer David Meister and Officer Tim Spradlin threw their hats in the ring.

In early May, Officer RJ Hawley, the senior officer during the New Year’s Eve event, who had been on leave following the incident, left the department.

In October, the Justice System Task Force reported to Council that progress had been made on several recommendations to local police. Police had received training in de-escalation techniques, as recommended, and the department had taken initial steps toward implicit bias training.

Chief Carlson and Council also agreed with the JSTF recommendation to hire a social worker for the department, and by the end of the year the department was ready to launch the hiring process for the new position.

In February Council members agreed to add enhancing local affordability to their 2017 Council goals. The goal aims to keep affordability in Council’s spotlight by looking at all Council actions in the light of how  each action would affect the cost of living in Yellow Springs.

At the beginning of 2017 Council continued efforts to gather community input into potential uses of the Center for Business and Education, or CBE, a 35-acre area on the western edge of town now owned by the Village. Most who responded to a survey on potential uses favored some form of economic development, as long as businesses aligned with village values.

In May, Council was contacted by the owners of Cresco Labs, a medical marijuana cultivation and processing company, whose leaders expressed interest in siting a facility in the CBE.

With villagers’ strong support, the effort moved quickly, and by the end of the summer Cresco and Council agreed that the company would purchase about eight acres for the facility, as well as pay for infrastructure, as long as Cresco was approved by the state as a large-scale marijuana cultivation center.

Cresco received that approval in December. By the end of 2017, the Cresco Labs ground-breaking had taken place, with plans to begin cultivation in the spring. The business stated it intends to hire 35 workers initially, up to a potential 75 employees.

In 2017 Council approved a new tax on transient guests in the village. The 3 percent transient guest lodging tax is paid by those who stay in town for 30 days or less.

The proposed tax was strongly opposed by the owners and supporters of Mills Park Hotel, the largest ho tel in town. However, Council members moved ahead with implementing the tax, citing it as one of the few ways that municipalities can raise revenues, and a way to offset the increased cost to the town of having a robust tourist economy. The tax is set to begin in 2018.

Council wrestled through much of the year with how best, and how much, to regulate Airbnb-type rentals in the village. The short-term rentals have become an increasingly popular way for villagers  to use spare space to make extra money, although Council member Judith Hempfling cautioned that the practice has the potential for further diminishing the village’s already tight affordable rental stock.

Ultimately, Council approved the new transient guest lodging as a permitted use in residential districts, while also stating Council could revisit the issue soon, after more information on the effects of Airbnbs on affordability is available.

The two-year effort of Springs-Net, the local group of municipal broadband advocates, was thwarted this year when a consultant reported to Council that creating a network in the village appeared financially risky, with substantial upfront costs and significant competition from AT&T and Spectrum.

Through 2017 Council moved ahead with efforts to increase housing density in Yellow Springs, an effort begun by a rezoning effort several years ago. Council approved Planning Commission’s recommendation for pocket neighborhood developments, or PNDs, a new zoning tool that allows a higher density of small homes with shared common space.

In the summer, Council approved a request from Home, Inc., for Glen Cottages, a PND on an acre of property on Xenia Avenue. The site will include both rentals and single-family homes.

In the fall, the construction of the long-awaited new Village water plant, a project more than a decade in the making, was completed ahead of schedule. The Village planned a public celebration for the opening of the plant in the spring.

In November, Council approved the Village budget for 2018. The budget is healthier  than it has been in years, according to Assistant Manager/Finance Director Melissa Dodd, and all funds are forecast to stay in the black for 2018

The healthy budget is linked to higher-than-expected income tax revenues for 2017. The income tax is the largest revenue of the Village general fund, which funds most services other than utilities.