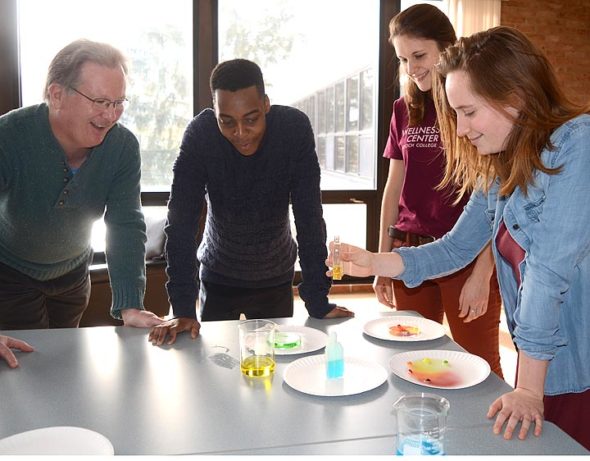 Isolating strawberry DNA, testing for water pollution, light bending with Jell-O, forensic fingerprint analysis and making ice cream are a few of the fun and educational science experiments on the Antioch College campus this winter and spring — and they’re all free to local youth.

Science Saturdays are once-a-month explorations in chemistry, biology and physics taught by Antioch College students for children and teens ages 5 to 18. The first session is Jan. 27.

Hoping to instill in local youth an early love of science and the confidence to pursue scientific studies and careers, Antioch College Visiting Assistant Professor Joseph Lennox conceived of the idea last year and received $3,000 in donations to fund it during Giving Tuesday.

“We want them to be engaged in science — to have their hands involved — and leave with a sense of accomplishment,” said Lennox, a visiting assistant professor of organic chemistry.

As U.S. schools increasingly focus on education in STEM — which stands for science, technology, education and mathematics — Lennox said he thinks the way much science is taught can be ineffective and frustrating for students.

That’s why instructors at Science Saturdays will use active, hands-on methods to promote learning while boosting self-esteem, he said.

“We want kids to see they are science capable, that they can understand things the majority of people think are unintelligible,” Lennox said, adding that STEM shouldn’t be taught “from an instructor in the front of the room” but “by learning to do it yourself.”

Younger students will engage in mostly edible experiments, Lennox said, including activities titled “A Feast for Yeast,” “’Dancing’ Gummy Worms” and “Can You Sink a Marshmallow?”

Older students will experiment with light sticks, chemical hot and cold packs, laser optics, forensics (including blood typing, drug detection and fingerprint and hair analysis) and water treatment and filtration, among other activities.

In addition, to support aspiring female scientists, who lag behind their male counterparts in STEM jobs and pay, the classes will be divided by gender, a move in line with research from the Association for Women in Science that female students learn better in groups with other females until age 16, Lennox said.

“Even though a lot of women will go to school to study STEM-based disciplines, a lot will drop out because it’s a male-dominated, patriarchal system,” Lennox said.

The Antioch Educational STEM Outreach Program, or AESOP, will host Science Saturdays on Jan. 27, Feb. 17, March 10, April 21 and May 19,with separate classes for the following age groups: 5–7, 8–10, 11–13, 14–15 and 16–18. Because of high demand, registration is required, and to accommodate as many students as possible, attendees should only register for one Saturday.

For those under 15 years of age, female-identified groups will be in the morning from 9:30–11:30 a.m. and male-identified groups in the afternoon from 1–3 p.m., with space for five students of each. Trans-, mixed- and non-binary gender students can attend the section they identify with most, according to Lennox. The groups will meet in McGregor 126.

Co-ed sections will be held for those 16 to 18 years old in McGregor 118, with openings for 12 students in the morning and 12 in the afternoon.

To register, email aesop@antiochcollege.edu with the student’s age, gender identity, and, if 16 or older, the preference for morning or afternoon.

In an interview this week, two female Antioch students who will teach Science Saturday sessions shared similar experiences of being discouraged from pursuing science by teachers and advisors because of their gender.

For fourth-year student Valerie Benedict, 23, the desire to become a better baker by understanding the chemistry of cooking fueled her interest in science at a young age. But she was eventually discouraged from studying medicine because she was told she would then have to choose between her career and having children. Undeterred, Benedict majored in science at Antioch and now is deciding between a Ph.D. or medical school program.

Twenty-one-year-old Julia Dwight, also a fourth-year science major, was always interested in medicine, but was told by an advisor she shouldn’t go into a scientific field because it would be too challenging. She became an EMT after high school and transferred to Antioch from the University of Vermont, where she was a biology major. Her next step is to get into a physician’s assistant program. In the face of those skeptical of her choices, Dwight remained undaunted.

“We have professors here who care about our outcomes and are going to do the utmost,” Dwight said, citing the long hours spent in Lennox’s office after class going over problems. “I actually had a great time in organic chemistry,” she added, smiling.

Now Benedict and Dwight are looking  to share their love of science with local youth, especially girls who may feel more comfortable exploring science with other girls.

According to a study released last month from the Pew Research Center, women working in STEM jobs faced gender-based discrimination at higher rates than women in non-STEM fields. And a 2011 U.S. Department of Commerce report found that women only hold 24 percent of STEM jobs even though they make up half the U.S. labor force. It’s a statistic Dwight and Benedict want to help turn around, citing the importance of diversity  in STEM fields.

Lennox added that he also hopes AESOP helps students from marginalized ethnic backgrounds and aspiring first-generation college students, who he said may not receive the same level of support from their families or schools.

Lennox himself was a first-generation college student, and was dissuaded from taking high school science and math courses by a teacher.

“She said, ‘Joseph, you’re a blockhead. Whatever you do don’t take any classes in science or math or you will fail them,’” Lennox recalled. “I can still hear her words.”

Lennox followed the teacher’s advice to avoid chemistry in high school but later went on to earn his doctorate in the field, then spent 13 years in the pharmaceutical industry, where he discovered and developed a new drug to treat hepatitis B that is currently in phase II clinical trials.

“You really need to give kids a chance, because you never know what they are going to become,” Lennox said, reflecting on his journey.

It’s not surprising that schools are investing more time and resources in STEM education, as STEM job growth outpaced overall job growth in the economy since 1990, with a 79 percent increase in jobs in STEM fields, according to the Pew Research Center. However, Lennox believes STEM education can be improved, especially at the college level.

Since entering academia in 2013, Lennox has pivoted from original research as a biochemist in the lab to using the classroom as a lab to study science education itself. One of his efforts has been teaching science to non-science majors, who he says can benefit from the critical thinking and truth-seeking of scientific explorations, no matter their field.

“It’s important for students to have a basic foundation of science so they can at least know the difference between the truth and something really suspicious,” Lennox said.

For example, in his Antioch course, “From Atoms to Pharmaceutical Ethics,” Lennox teaches students “what they need to know to be able to argue with a pharmaceutical lobbyist.” He is also teaching a course for non-science majors called “The Science of Science Fiction,” during which students will learn the science behind time travel, warp drive, teleportation and other theoretical concepts used in popular television shows and movies like Battlestar Galactica and Star Trek.

“The idea of the course is to harness the already existing knowledge of students so I can get their buy-in before they even come to class,” Lennox said.

As for science majors, Lennox said that much STEM education is “dysfunctional” because it fails to cultivate in students so-called soft skills such as teamwork and oral and written communication. He recommends art and philosophy courses to his science majors so they can improve their abilities for imagination and visualization, skills he finds diminishing in the younger generation. In the end, he envisions a healthy balance between science and the humanities.

“A lot of the funding went to STEM, but we need to bring back art in schools,” Lennox said.

For more information or to register, email aesop@antiochcollege.edu.