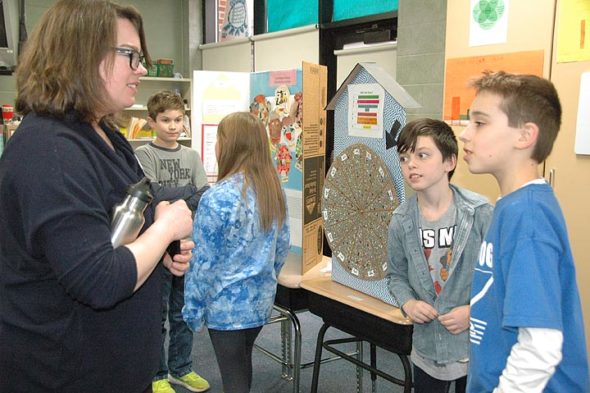 The fourth graders in Shannon Wilson’s class at Mills Lawn are tackling the issue of affordable housing in the village as a year-long Project-based Learning unit. They met with members and supporters of Home, Inc. just before the winter break to learn about the nonprofit’s work and to share their research. Above, Trevor Roberts and Jonah Simon engage Home, Inc. Executive Director Emily Seibel, while Ryan Thomas confers with a peer in the background. (Photo by Carol Simmons)

Finding an affordable place to live in Yellow Springs can be a challenge.

That’s a conclusion reached by Mills Lawn fourth graders as part of a project-based learning unit that by its completion later this school year may well come up with some proposals for addressing, if not solving, the issue.

The 18 students in Shannon Wilson’s class didn’t start their project this fall knowing that the local housing market would be their focus of study. All they knew was that they wanted to grapple with an issue that was important to the community.

They identified that issue by polling passersby downtown in early September.

But first they constructed small wooden kiosks — outfitted with wheels to make them more easily transportable — in the school’s new woodworking makerspace room. They used the kiosks to conduct their community survey in front of Tom’s Market.

What they heard echoed the themes being discussed by village leaders, as a majority of respondents identified the most pressing local issue to be a need for more affordable housing, while others noted such related issues as a decline in the community’s level of diversity and calls for equality, kindness and love.

As the students looked into the housing issue more deeply, they soon realized that it also was a personally relevant concern for a number of the classmates.

“My family has been trying to find a house in Yellow Springs since I was in kindergarten,” 9-year-old Lilliana Sylvester, whose family lives in Xenia, said during a classroom event that welcomed members and supporters of Home, Inc. for a discussion with the students.

Zoe Siemer, 10, said her family also lives in Xenia, and her father drives her to school each day.

“It took like three years before my family found a home here,” said Kiernan Anderson, 10 this month.

“A lot of us have experienced it,” Trevor Robert, 9, said.

“This is incredible,” she said of the work.

The class had created sample families, complete with household budgets based on their chosen professions. Then they researched the cost of buying a home and living in Yellow Springs compared with the costs in a nearby community. What they found confirmed the anecdotal notion that Yellow Springs is a more expensive place to live than other Greene County towns, and homeownership appears out of reach for some full-time incomes.

In the process, they also learned about mortgages, debt-to-income ratios, insurance, utilities and taxes.

But no matter how prepared one is, there is still an element of luck in acquiring a home, the students discovered.

To reflect that luck aspect, the students had devised a “YS Housing Wheel of Fortune,” where interested “homebuyers” could spin a game-show-like wheel to see whether a house they hoped to buy had been snatched up by another buyer, hadn’t pass an inspection, needed too many repairs or some other variable.

And the students asked them questions as well — having learned as much as they could about the nonprofit from its website before the visit: Does an interested homebuyer have to qualify for Home, Inc. help? (Yes to buy a house; no for free financial coaching.) What is required to buy? (Meet a minimum income and debt-to-income ratio.) Do you take donations? (Yes.) And are you proud of yourself?

Seibel answered the last one. “I’m proud of our mission,” she said. “It’s incredibly humbling to do this work. It’s food for the soul to help people get a home.”

“They had to become experts first before they decide what they’re going to do with it,” she said.

The classroom visitors, including Village Council member Marianne MacQueen, who was one of the founders of Home, Inc., would likely attest that expert status has been accomplished.