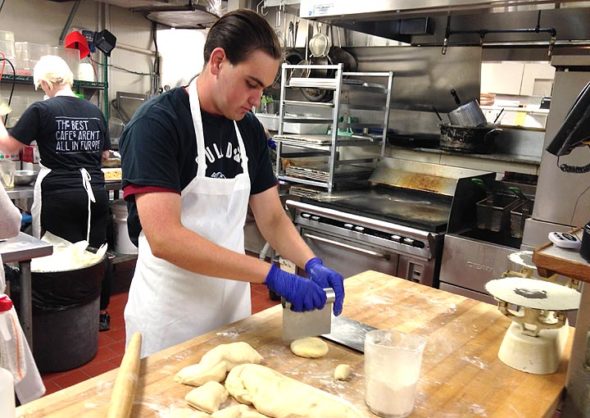 Making some dough:
As a member of Yellow Springs High School’s Bulldog Brigade, junior Harper Mesure has completed a variety of temporary job placements around town, including at The Winds Cafe, above, where owner Mary Kay Smith was so impressed with his work, she hired him part time. (Submitted Photo by Sylvia Ellison)

Sierra Miller, a senior at Yellow Springs High School, says her “dream job” is to be  a voiceover artist, working in television and radio. In the meantime, she’s getting a variety of job experiences, for wherever her dreams take her, through a distinctive district program.

Miller is a member of a small high school crew of workers known as the Bulldog Brigade,  made up of students of Intervention Specialist Jody Chick, who oversees as the young people take on temporary jobs throughout the village.

“These kids have skills,” Chick said in a recent interview. “And we’re fortunate in Yellow Springs to have a community where these kids can get these jobs.”

Chick initially conceived the program, now in its second year, as a project-based learning, or PBL, activity for her students who have been identified with mild to moderate disabilities. The goal was to give students real-world work experiences in the community along with lessons in all that goes into getting and keeping a job — from grooming to timeliness to accepting and learning from constructive criticism.

The students spend two hours a week physically on the job. Placements, which are unpaid, last from six to eight weeks.

Miller is working this school term, which started in January, at Basho Apparel, a retail outlet that makes and sells screen-printed designs by local artists. She said past placements have included Mills Park Hotel, where vacuuming was among the housekeeping duties she performed, and the Yellow Springs News, where she greeted customers, answered phones and prepared subscription-renewal mailings, among other office tasks. At Basho, her first responsibility has been cleaning and preparing the previously used printing screens for reuse.

Basho is a newer addition to the program, and owner Anthony Wall said he is already impressed.

“It’s been excellent,” he said recently, while Miller worked independently at a nearby industrial sink, spraying and scrubbing old screens. “I really like the program. The students get to find out how to get their hands dirty and experience everything” about working.

Four students are currently filling positions in town, Chick said. They don’t report to work alone, however. Each student worker is supported by an adult, either a classroom aide from the high school or a staff member of the Greene County Board of Developmental Disabilities, or GCBDD. which is partnering with the district on the project.

GCBDD’s Josh Welhener, a coach with the agency’s transition team, which helps move young people from the school setting into the workforce, said that the Yellow Springs program is unique in the county and offers a model for other districts.

“Yellow Springs is a perfect storm” for creating a successful program, he said. “It has a teacher willing to take it on, [means of] transportation and a willing community.”

Teacher Chick said that local businesses have been receptive to the program, but some employers, especially those with small operations, are initially uncertain if they have anything for the students to do.

What they find, she said, is that there are plenty of possible roles the students can fill. In addition to Basho, the hotel and the News, placements have been made at Tom’s Market, the library, Dark Star Books, The Winds Cafe and with business property landlord Bob Baldwin, among others.

The Yellow Springs Chamber of Commerce played a large role in getting the word out and in bringing businesses on board, Chick said.

“I think it’s absolutely incredible,” she said in a recent phone interview. And while the Chamber was involved in helping launch the effort, Wintrow said the Brigade’s success was all its own. “They basically went out and did their own thing. … They’re an incredible group of kids.”

Mary Kay Smith, owner and chef at The Winds, was so impressed with  Harper Mesure, a junior, that she hired him over the winter holiday break, and he continues to go in each Saturday as a paid employee, working in the kitchen with food prep and cleanup.

“It was great,” Mesure said recently of being offered the job. “Mary Kay is my boss, and she taught me to use the dish washer,” he said. He also said he likes that the other workers are very helpful to him.

Mesure’s mother, Sylvia Ellison, who is also a member of the Yellow Springs school board, praises the program and its affects.

Besides the tangible job skills the students are learning, she pointed to a sense of accomplishment and pride that comes with knowing “you can complete a task and feel like people can count on you.”

It’s particularly empowering “to know that someone thinks you’re a good employee,” she added.

What’s more, work provides a “sense of purpose” that is immeasurable.

Ellison said that Harper’s job also “makes it more real to him to look ahead.” Life after high school is “not this abstract idea,” she said. “That’s huge, and huge for us as his parents. It makes it so much more comfortable to think about him moving ahead.”

While successful work experiences are welcome, they’re not the program’s primary goal, both Chick and the GCBDD’s Welhener said.

“We’ve placed kids in jobs they don’t like,” Chick said, noting that completing disagreeable tasks is real-world work experience, too. “They try different jobs to see where they’re successful, but we also let them fail a little bit.” And they learn from their mistakes.

Back in the classroom, the students work on personal portfolios, practice interview skills and write résumés. “We talk about having a reference,” among other résumé components, Chick said.

The job-skills training now extends to include Chick’s eighth-graders as well. The younger students work on such projects as stuffing envelopes and shredding paper for the Yellow Springs Senior Center. And they learn “simple things like giving a handshake or maintaining eye contact,” Chick said.

Helping students transition into the workforce after school “is an authentic need,” Chick said, noting that national statistics report three out of 10 adults with disabilities acquire gainful employment.

“That would not be acceptable for any other minority group,” she said.

The numbers are worse for people with intellectual and developmental disabilities, or IDD.

Merely 15 percent of adults with a developmental disability have paid jobs in their communities, according to a 2014 report produced by the Institute for Corporate Productivity and posted on the  ohioemploymentfirst.org website.

Among the report’s key findings is the conclusion that companies that hire people with IDD reap solid business benefits, including improved customer satisfaction, while gaining highly motivated workers whose profile “reads like that of an ideal employee,” particularly in terms of dependability, engagement, attendance, attention to work quality and productivity.

Chick said that while preparing her students for future employment, the Bulldog Brigade also serves to raise disability awareness within the village. Seeing these students at work, it’s obvious “these kids have skills,” she said.