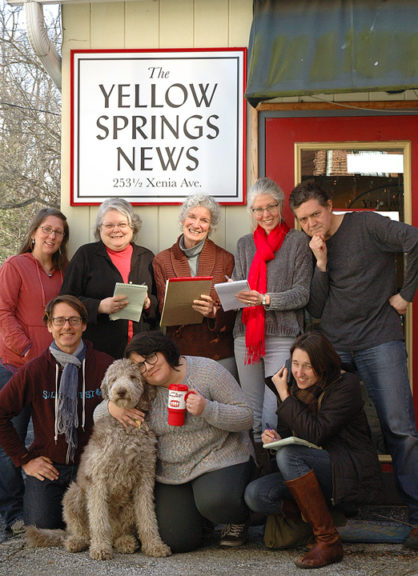 News wins top prize, for eighth year in a row

The Yellow Springs News won the Newspaper of the Year award, the highest honor in its size division, for the eighth year in a row at the annual convention of the Ohio News Media Association (formerly Ohio Newspaper Association). The event took place Feb. 8 and 9 in Columbus.

The Newspaper of the Year award goes to the paper in each of four size divisions that wins the most individual awards in the Osman Hooper contest for weekly papers. The News won 13 awards in the categories of In-Depth Reporting, Community Awareness, Best News Story, News Coverage, Original Columns, Best News Photo, Best Feature Photo and Special Editions.

‘Small papers doing great things’
At last week’s Ohio News Media Conference in Columbus, the Yellow Springs News was represented by Editor Diane Chiddister on a panel discussion titled “Small Papers Doing Great Things.” The News was one of two Ohio papers asked to be on the panel, with the other the Chagrin Valley Times, a larger weekly paper from the Cleveland area that has, like the News, consistently won the top award in its size division. It was represented by Editor Ellen Kleinerman. Both editors spoke on aspects of their papers they believe contribute to the papers’ success.

In the category of In-Depth Reporting, the News won two out of three possible awards.

It won first place for “Justice for John Crawford?” a 2016 seven-part series on the 2014 police shooting death of a young black man, John Crawford, in the Beavercreek Walmart.

“Great job keeping this story in the forefront of people’s minds,” the judge wrote. “Excellent interviewing and quoting. You took this story beyond a breaking news story. I am impressed.”

The articles were written by Reporter Audrey Hackett and Editor Diane Chiddister.

The News also won second-place in In-Depth Reporting for its coverage of the Jan. 1, 2017, New Year’s Eve Ball Drop and its aftermath. The event sparked community outrage and a year-long series of changes in the police department. It was reported by Hackett, Chiddister and Reporter Dylan Taylor-Lehman.

“Comprehensive reporting with a variety of angles,” the judge wrote. “Great breakdown of what happened on the night of the ball drop. I felt like I was there.”

The News also won first place in the category of Community Awareness for its coverage of the ball drop and aftermath.

“The articles ask the basic question, What happens when a community says  its police department has gone too far? Well-written, detailed articles like these help communities understand what’s happening following tense standoffs between police and citizens,” the judge wrote.

The News won two out of the three possible awards for Best News Story for two stories written by Hackett.

The first-place prize was awarded to “The realities of race in YS schools,” a 2017 story about racial issues at Yellow Springs High School.

“Thorough story on a sensitive topic, with examples from students and answers from administrators on how the district will address racial incidents in the schools,” the judge wrote.

The News also won second place in Best News Story for Hackett’s “Cresco Labs on CBE land?” a June, 2017, story about Council’s decision regarding whether to sell land to the medical marijuana company. The deal went through, and construction recently began.The News also won third-place in News Coverage, an award that honors overall coverage of community news.

In the category of Original Columns, the News also won two out of the three possible awards.

News Village Desk Editor Lauren “Chuck” Shows won first place for her online blog, “Sorry, I’m Not From Around Here.” Hackett won second place in Original Columns for her column, “The Moment After.”

In other categories, the News won all three awards in Best Feature Photo.

In third place for Best Feature Photo, News Advertising Director Robert Hasek won for his image of children catching snowflakes on their tongues.

And the News also won first place in Special Editions for the 2016 “Guide to Yellow Springs,” which featured information about the community along with articles from the series “Why YS?” about why local people chose to live in the village.

Articles in the series were written by Hackett, Chiddister and Taylor-Lehman.

The News is co-owned by Chiddister, Hasek and Minde.